For those of you who DON’T know, Extraño is a character from the New Guardians, a well-meant but ultimately unsuccessful attempt at incorporating more diversity in the DCU during the 1990s.

You know when you bring in Harbinger for star power that you're in trouble.

DC has had a lot of unsuccessful attempts at things over the years, but… New Guardians was outstandingly unsuccessful.  Supplying links will have to do for those you who didn’t experience it firsthand because I don’t have the fortitude to recount the horror, but suffice it to say: the Guardians of Oa decided it was time to make some “New Guardians” by sparking powers in a cultural hodgepodge of persons who would lead humanity to its ‘next level’.

One of those people was Peruvian Gregorio de la Vega, better known by his codename: Extraño. Extraño was DC’s first gay character.

Um, well, at least, that’s how we were supposed to interpret him.

He was created in 1988, when you could be bold enough to create a gay character… as long as you didn’t actually use the word ‘gay’.

Gregorio was what they call “flamboyant”, and his superhero identity even more so. He sometimes referred to himself in the third person as “Auntie”.  He was not designed to blend in; he was designed to be on the boundary. I mean, his codename is “the Strange One” for pete’s sake.

I am not criticizing that choice on the part of Steve Englehart; I have zero doubt he had the best of intentions with Extraño and the other New Guardians.  But we all know what road is paved with good intentions and New Guardians was nothing if not hellish.

Now, they butched Extraño up in short order:

Was this due to reader reaction? Conforming to the superhero body stereotype? Did Gregorio simply take advantage of having magical powers to make himself more conventionally attractive?  Because it's important to remember how he started out:

Now, all of those "Chosen", the people picked to become New Guardians, were ordinary schlubs before being 'ascended'.  But Gregorio was, well...

Peruvian Paul Lynde here has his next scene on at the nearby waterfront:

where he attempts to commit suicide.
But is saved by Wally West.

Thanks to Wally's fractured-Spanish pep talk, Gregorio decides to put suicide on hold and instead ascend to near godhood. 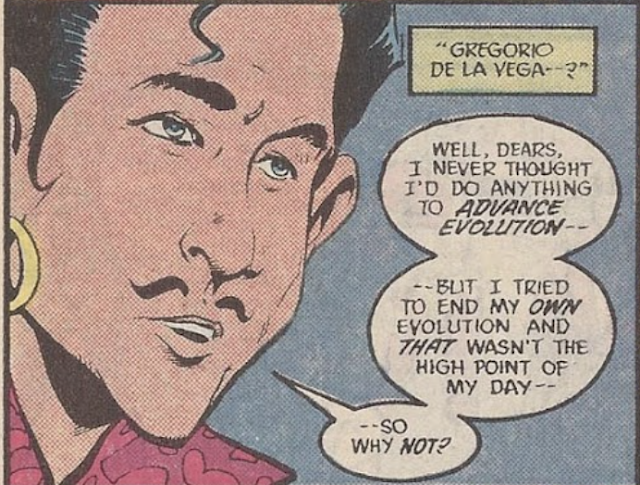 The New Guardians were pretty quickly erased by hypertime and a collective agreement by the general public but not before Extraño came down with a case of Bury Your Gays. 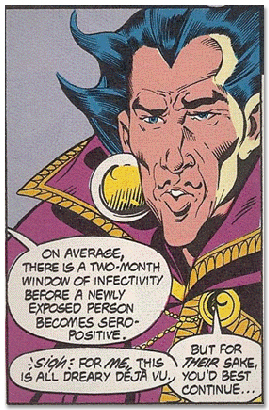 The fate of Gregorio was ambiguous although:

“Extraño was ultimately killed by HIV infection, but it was contracted from a fight with an "AIDS vampire" supervillain called the Hemo-Goblin.”  I took that quote from Wikipedia directly because, frankly, I didn’t want to be responsible for saying it myself.

Also... it's not true.  Gregorio didn't get the chance to die of AIDS because he was eaten by Krona.

Besides, thanks to Rebirth, Extraño turns up healthy and whole a mere quarter of a century later in the 2016 Apollo/Midnighter miniseries.

The butching up of Gregorio took a HUGE leap in this Steve Orlando miniseries.  And that's kind of understandable.  The original portrayal of Gregorio was "of its time" and so is this one.

This version of Gregorio has a husband named Hugh (presumed to be the superhero Tasmanian Devil, because Those Two Gays You Know Are PERFECT  for each other!) with an adopted eldritch girl.  Because it's 2016 so of course he does.

There is, of course, no questioning Orlando's bona fides in his reintroduction of Gregorio De La Vega: "With a book like Midnighter & Apollo, which from cover to cover is a love letter to queer characters and our struggle to live, be visible and love, it felt right to return to one of the first and reintroduce Gregorio to a new generation."

Orlando didn't "reintroduce Gregorio to a new generation." He reinvented him for one.  And, in its way, his reinvention is just as stereotypical for our time as the original version was for his.  Like much of the gay community, this version of Gregorio seems to be embarrassed of his more flamboyant past and become conformist rather than individualistic.  Is this really a healthy model for contemporary gays?

I don't think Gregorio has been seen in the DCU outside this series since then. But if he were...

would we be losing more than we gain with this version?

I submit that, although a painful stereotype in 1988, the original Extraño might be a welcome breath of fabulousness in this era of the stodgy suburban gay couple. 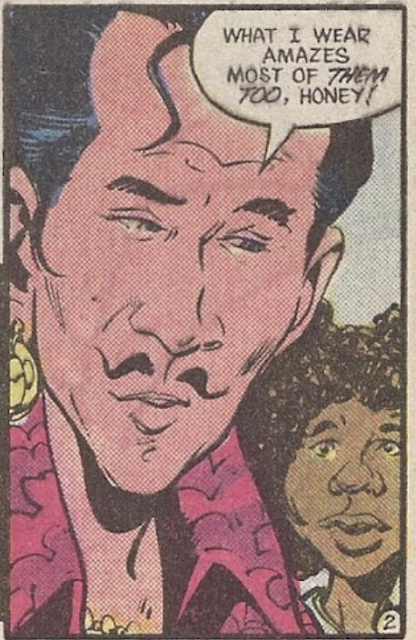 I think if I were to reinvent Gregorio de la Vega for modern times he would nearly JUST like Orlando's version.  But Extraño....!

My version of Gregorio would have to (or would choose to) convert to his original flamboyant over-the-top witch-self, both in dress and in personality, in order to use his power and it would be a perfect disguise... 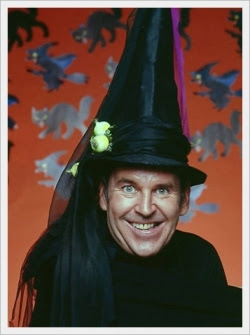 Absolutely agree with your point about the "modernizing" of Extrano to fit a more updated, "suburban" model. The irony is that rather than keep the character true to his flamboyant and unique past, it almost sends the message that it's something to be ashamed of in favor of conforming to who society says you should be. And isn't that one of the many battles the gay community has been fighting for years?

Perhaps it's projecting, but it would have been nice to see a modern Extrano comfortable in his skin and proud of his unique past (and fashion choices) instead of written/drawn as a rather bland prop that was instantly forgettable. Someone who owns his unique flair rather than become a stereotype, no matter how "modern" that might be.

Ah, the New Guardians, a last-ditch attempt by the Original Formula Guardians to convince the universe that everything they touched wasn't a complete nightmare, by spouting some nonsensical prophecy to distract the robots, creating a few superheroes (and a supervillain), and running away. I feel like the poor kids (well, those who survived) probably needed to go to group therapy with the Controllers, the Zamarons, Krona, the Psions, the Manhunters, Sinestro, and even the then-about-to-implode-multiple-times Green Lantern Corps...

I had such high hopes for the series, even liking most of the characters despite the obvious stereotyping, and then finding out that it was an incoherent mess. And then it gave up on its own premise, because apparently Englehart thinks less of the Guardians than I do.

Was Extraño not explicitly out, though? I remember a captured Sinestro flirting with him (which, given that his generation of Green Lantern needed to be "fearless and honest," presumably means that Sinestro must have actually been attracted to him) and Gregorio mentioning that it had been long enough since a man had paid him any attention that even a fascist criminal's come-on was nice. Maybe I read into something, though, or mixed the memory with something else.

I am disappointed that I never noticed how he's basically wearing Alan Scott's lounge-wear collection, though. Though I don't think there's a cherry-red pajama top underneath the cloak. I have to admit, though, that I like the resurrection of the "Vibe is a Golden Age character" premise to reboot Extraño. It's surprising that DC doesn't go to this well anymore, since it seems like the only way to approach a secret identity in modern times that isn't doomed to failure, and they're clearly not letting go of secret identities.

In the 80s, stereotypes and misconceptions around gay people were rampant, and there were few positive portrayals. A “normalizing” gay hero might have done more to break down those misconceptions. 2010s Extraño could have shown straight people and gay people alike that being gay didn’t make you a flamboyant stereotype. Personally, I could have related much more easily to Daddy Extraño than Auntie Extraño.

Today, there’s much more acceptance of “normie” gay people, especially cis gay men, and especially those of us who are white or white-passing. What society is still working on, however, is acceptance of LGBTQ people who don’t blend in as easily — trans, nonbinary, gender-non-conforming and visibly nonwhite people. In that context, fabulous 80’s Extraño is arguably more necessary than ever. Don’t fit in? Feel like a freak? Ostracized for your strange mannerisms or style of dress? Never fear, honey, Tia Extraño has got your back.

You analysis of the situation is better than mine.

Also: "Daddy Extraño / Auntie Extraño." Now I want a comic(al) book about Auntie and Daddy pretending to be brothers when they are IN FACT the same person. Probably written by Keith Giffen.

Extrano would have been a lot better if they'd been allowed to say he was gay. Since they apparently couldn't, they decided the best approach was to hit the reader over the head with every possible gay stereotype, so there was no way to miss that he was gay. I can't help but blame Englehart and whoever edited this mess, because while maybe they couldn't just say he was gay, they certainly didn't feel blocked from making him a pretty insulting gay caricature. (At least, I imagine I would have found him insulting.)

I get the argument that old-style Extrano would make more sense today, fair enough.

"we all know what road is paved with good intentions"

As ever, begging the question of what sort of intentions the road to HEAVEN is paved with.

The road to heaven is paved with good actions, not good intentions.
But that's not really the point of this post.

Yet for all the campiness, there was an underlying heart to OG Extrano. He was always there for his teammates, he saw himself as an outsider in the world he risked his life to save, and, I'll say it, we saw far campier costumes on cis/straight heroes during that time.

Reboot Extrano is just missing that humanity. He's all told and not shown. He's got some big flared boots to fill.

Say what you will, but there's no denying that Extrano was by far the best dressed member of that team - which was admittedly a very low bar to get over, but still. That original outfit was the best thing since Marvel came up with Jack of Hearts four years before. I'd kill to own a coat like that. Not quite as much of a fan of glowingnovely-skull Extrano (I swear he's channeling Carmine the Bowler in that pose) but he does pull off the tufted armband look with confidence. A lesser man would stop at two, but Extrano sneers at such petty limitations.

Losing the coat is still a misstep, though. I'd like to think even boring 2016 Extrano still has the thing hanging in a closet somewhere - next to the armbands, of course.