In the coming weeks, to celebrate the (re-)formation of the JLA in the New 52, we're going to be taking a look at how the JLA made the shift from the Secret Sanctuary to the Satellite, how that marked the end of the Silver Age, making fun of easy targets Green Arrow, Red Tornado, Martian Manhunter, and Denny O'Neil.

We'll kick this celebration off with a new JLA HQ Heroclix map (below) and culminate it with something many people have been asking for... my map of the JLA Satellite; don't miss it!

In a recent post, I shared a custom Heroclix map of the JLA's original HQ, "the Secret Sanctuary".

But now I have already designed another version of the Secret Sanctuary that would more accurately portray the claustrophobic feel of its original depictions. It will be based on the black and white cutaway diagram that was DC's first attempt to show the layout of the JLA HQ, which can be seen here at the DC Database.

There are several challenges in this attempt at a "claustrophic" version of the Secret Sanctuary. Like most of the famous "DC headquarters cutaways", the diagram has levels stacked on top of one another, something which doesn't convey easily to Heroclix maps. Plus, there are a few matters of scale that are, to be kind, wildly off-base. For example, while it is easy to believe that the JLA would have meetings in an area no bigger than a split-level suburban home, it is NOT easy to believe that they can park the Invisible Plane, the Arrowplane, and the Batplane in hanger exactly that same size. And that's to say nothing of squeezing a pool, a gym, a lab, and a trophy room into the basement.

But I found a way to get it in all on one map, believe it or not. So, while my other version of the Secret Sanctuary is like playing in a football stadium, the second version is more like trying to storm a castle. 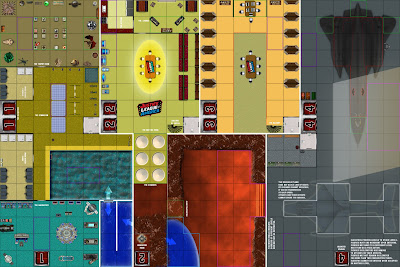 Starting areas for heroes and villains are marked in slightly different colors. Villain teams have two starting areas: the entrance cave and hangar (they've managed to break in somehow). The heroes are caught unawares; they are spread out at various locations in the Sanctuary; note that no two of their starting squares are adjacent!

Some special types of "territory" are included, out of necessity, including ELEVATOR squares and the INVISIBLE PLANE squares (it's explained on the map). The white "walls" denote areas' being on different levels, so those cannot be "broken through".

I went for total authenticity here, which is why the meeting room and balcony are such god-awful colors: I actually color-sampled the original comic panels of those locations to make sure the colors were (hideous but) authentic. There are no bedrooms (they didn't seem to have private quarters in the Sanctuary); but I did add bathrooms, just for realism's sake.

Authenticity is also responsible for the somewhat goofy looking scanners in the entryway and the very odd service elevator to the generator room. Weird, perhaps, but it was there in the original diagram so I wanted to maneuver it in.

Special touches include Aquaman's water passage from the swimming pool to the water outside (which is de rigeur to be authentic!) and a hologram in the cave disguising the entry tunnel.

I'm happy to send the JPG file to anyone who'd be interested in printing it.
Posted by Scipio at 5:44 AM 2 comments:


It's Haikuesday at the Absorbascon, and this week, with only a little bit of careful listening, our haiku came to us readily from the evil lips of Sirena, Empress of the Planetoid Sargasso.

This poem is called... 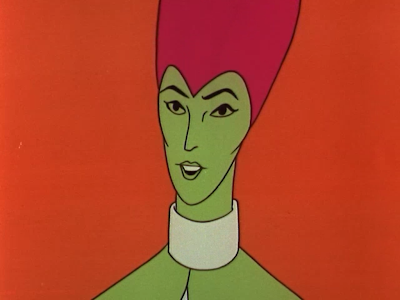 He can go nowhere.

come for these earthmen.

So nihilistic. So fatalistic. So hopeless! Some Blue Lantern needs to kick her butt. Not that they do that, of course. Perhaps they could just inspire the crap out of her; it would serve her right.

What haiku can you compose about Sirena or how here attempt to conquer by capturing Green Lantern was foiled by Kairo the Venusian Helper and Beefy the Space-Owl?


Meanwhile, on the grim and forbidding Planetoid Sargasso...

Sirena, the Empress of Evil (tm), has launched her fleet against the decrepit Oans, who prepare to watch the own destruction from the comfort of their own comfty chairs, up from which, like good retirees, they would never pick their asses. 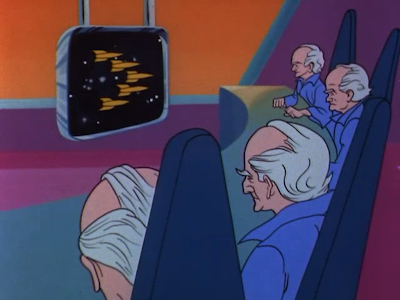 "Despite our infinite wisdom, we have deceived by the nurses, Ollie Ollie Oxenfru! For surely this spectacle is not Mattlock!" "Silence, Jolly Jowly Jerry-Tol, or our pudding rations will be threatened!"

Meanwhile, Kairo, Hal Jordan's Venusian Helper, manages to convince the kamikaze space-owl (whom he is now calling "Beepy" --or maybe "Beaky"-- instead of "Beefy") to fly into the Rapunzel-tower where Green Lantern is being held just out of arms reach of his power ring, and do its thing. 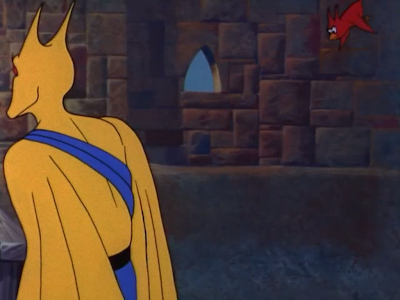 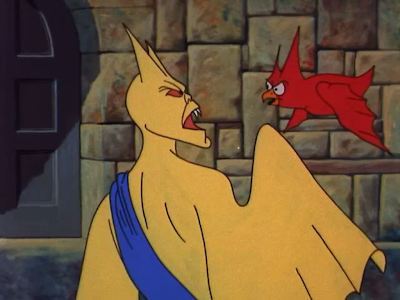 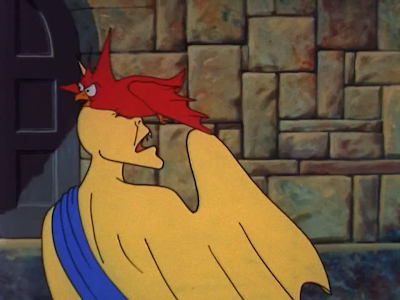 Finally, someone dumber than Hal Jordan. At least when Hal got hit in the head with a space-owl he wasn't STARING RIGHT AT IT.

Hal, as predicted makes a dive for his ring. 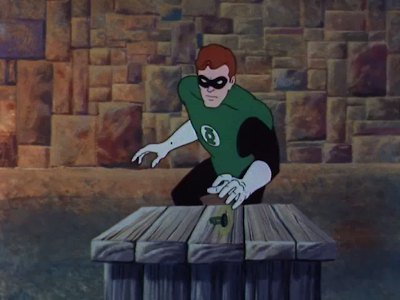 Actually, it's more a dainty 'pluck'.
And shoves it onto his middle finger, which is not where one usually wears rings. 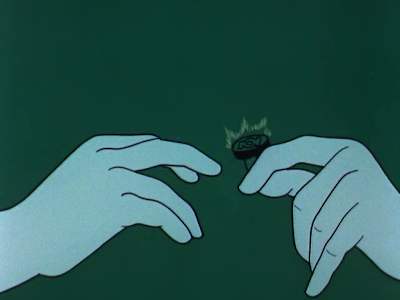 Why does Hal wear his power ring on his middle finger? 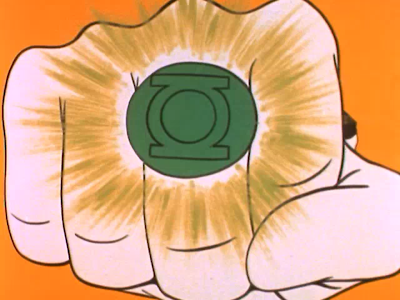 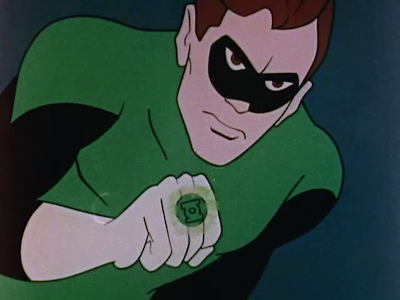 The Eyes of Hal Jordan will still stare you death, power ring or no.

But Hal doesn't follow rules, buddy; he breaks them. Or, perhaps, is simply blithely unaware of them, along with space-owls, highway signs, buttresses, the Twelve Steps and any other thing that might get in his way.

"Guh*hick*reat jzhob, Beasty!", Hal congratulates the kamkazi-bird that just an hour ago attacked him and let him get captured in the first place. To be fair, Hal may not even know that, since he didn't even SEE the owl hit him ... 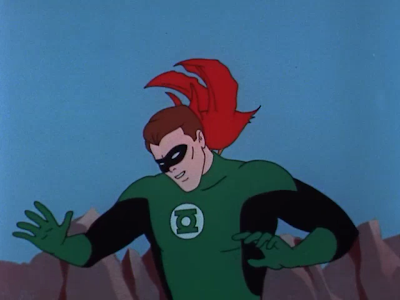 Which looks like this, in case you've forgotten
...and therefore just assumes that this is some new pet of Kairo's. Named "Beasty". I kind of give up at this point, because the only thing stupider than Hal recognizing the space-owl and treating it as if it were Kairo's familiar pet and calling it by a name he can't possibly have ever heard is ... his doing all that AND GETTING THE BIRD'S NAME WRONG. Ironically, it's the only single word in the entire cartoon that Hal doesn't slur over. Even when doing the impossible, Hal not only does it incorrectly, but painstakingly incorrectly.

Hal rings his way out of prison, Kairo, with his pretty pretty eyelashes, mounts Hal... 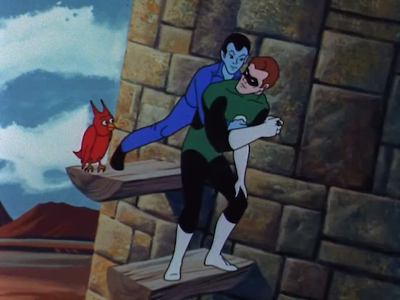 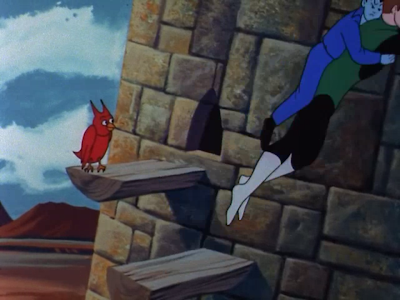 Hey, I don't write 'em. I just call 'em as I see 'em.
and, because there is so little time left in the cartoon, Green Lantern does exactly what he should have done in the beginning: he boxing-gloves the entire Freakish Alien Horde into unconsciousness. 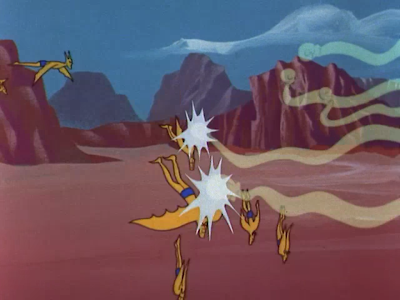 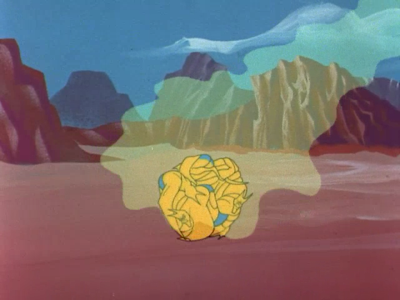 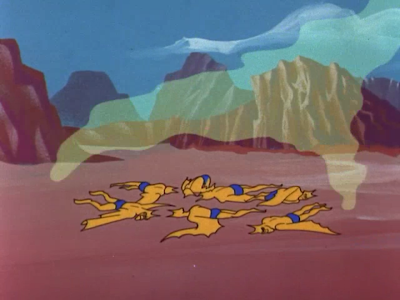 Wow; just like the "Before" and "After" photos at my 28th birthday party.
Except these guys are still wearing their unitards.

Green Lantern sends Kairo and Beastly (the owl's name changes every time it's said, by now) back to earth in the experimental space-plane with the other prisoners, while he goes off to kick Sirena's fleet's ass. 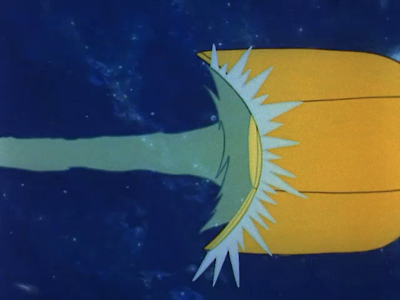 Note that the ships are yellow. Just like the Freakish Alien Minions. None of which bothers Hal's ring at all. Because while kamikaze space-owl cannons are not too stupid for Filmation, apparently the power ring's traditional weakness to yellow is too stupid. Oh, and the "Chekov's gun" in the opening scene, where Hal didn't take the time to charge his power ring? Nope, that gun never gets fired, and Hal's ring doesn't come even close to running out of power. Why? Because Filmation doesn't follow rules, buddy, they break them.

In last, desperate attempt to save her plan, Sirena orders her armada to "fire their destructo-bombs" (as opposed, one supposes, to their constructo-bombs) at Green Lantern, 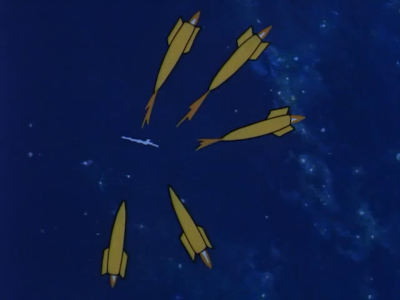 which he just sproings right back at them. 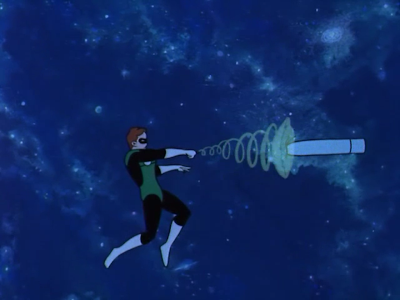 Her armada defeated, Sirena is sentenced to "a long-term of galactic confinement." Perhaps I'm just misunderstanding the term, but "galactic confinement" doesn't seem particularly onerous. "You may not leave the galaxy!" isn't much of a punishment, even for someone with a fleet of spaceships. 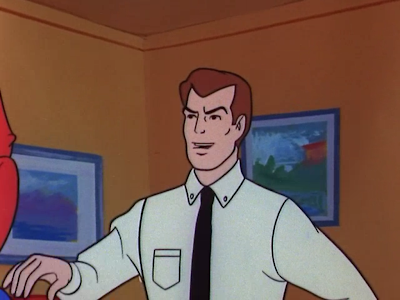 Back on earth, Hal and Kairo have a happy fade-out with Hal telling Kairo he can keep his space-owl pet, "Beastly", which is what they are calling it in the final scene. 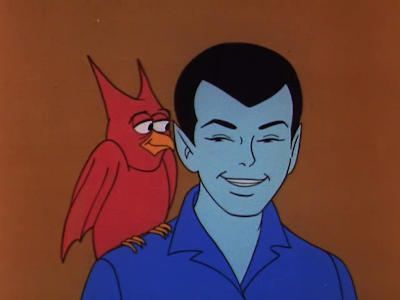 You know, the longer you look at that, the creepier it gets.
If you don't believe any of this, watch the cartoon and tell me I'm lying. Meanwhile, Guardians bless writer George Kashdan ... 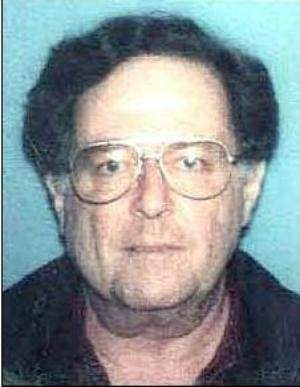 ...for taking the ten minutes it took him to dash this episode on the back of a gin-ringed cocktail napkin before getting up from the breakfast table one morning, probably the same day as he wrote this incomparable classic.