So, as you've probably noticed, the architect of all this chaos for the JLA at the end of SilverAge was Denny O'Neil. DC's iconic characters definitely needed some sort of revitalization; the goofy antics of Generalissimo Demmy Gog (JLA #66) seemed horribly out of place in the tumultuous late 1960s. O'Neil did more than his part to shake up the Silver Age's goofy status quo. O'Neill:

O'Neil was, in short, the Geoff Johns of his day. 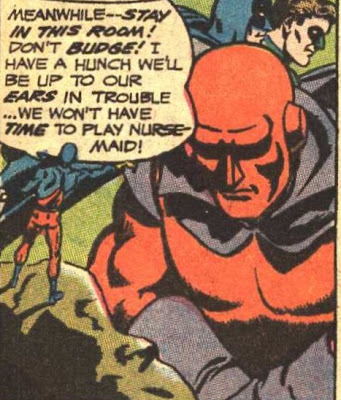 I haven't presented the whole process in a tidy order (hey, this ain't the Comic Treadmill!), so here's a recap:

JLA #70: Denny and DC try to foist the "Mind-Grabber Kid" on the readers. Crickets are heard. 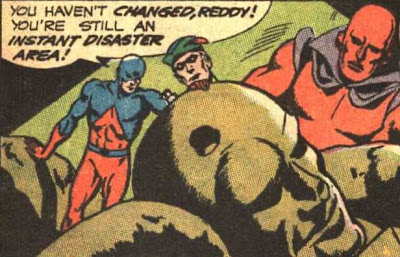 who's actually been absent from the title since #61, finally makes it official and leaves Earth. Oh, and everything and almost everyone on Mars is destroyed. More crickets are heard.

JLA #72: Red Tornado arrives and becomes the guest who never leaves. The Atom seems to be the only one with the guts to talk about the problem out loud.

JLA #73-74: The Aquarius story, in which Larry Lance is squished flat by a giant lint ball and his widow, Black Canary takes two panels to abandon her entire life and moves to Earth-1.

JLA #75: The 'canary cry' is discovered and Black Canary joins the JLA. She is the first member never to have had her own book, making her the Patron Saint of every crappy also-ran ever to join the League (I'm looking at YOU, Ralph Dibny).

JLA #77: Snapper Carr (who, like the Martian Manhunter, hasn't been seen in some time any way) betrays the Justice League to the Joker. Crickets clap loudly.

JLA #78: The Satellite is introduced. Remarkably casually, I might add.

In fact, the Satellite in introduced almost absurbdly casually, even for the breezy Silver Age. The JLA is needed, so Superman and Green Lantern pick up Green Arrow and his new ridiculous facial hair and take him to.... the rooftop of DC Comics. Oh, it's not mentioned by name, but it's "That publishing company that's always bugging us for stories." 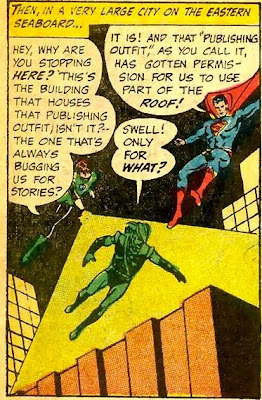 Oh, I'm sure their just begging for stories about YOU, Ollie.

The folks at DC (in exchange for a few licensing rights, I'm sure) have allowed the JLA to install a teleporter on their rooftop. Because NO ONE will notice a teleporter on a rooftop. Fortunately, there's no flying machines in the DCU and no one other than the Justice Leagues can fly! 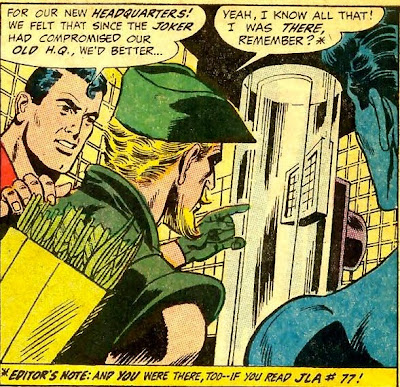 "Heh. You're a funny guy, Arrow. You do realize that if I were to, say, accidentally sneeze right now or have a hand spasm, I might easily crush your left shoulder into paste? Kind of hard to use a bow and arrow when you only have the use of one arm."

As to why it has to be in an incredibly insecure place like a rooftop in downtown Manhattan, well, I guess the signal from the teleporter needs to be unimpeded by a roof. Or a passing plane. Or a flock of a geese. Or the horizon, given the fact that the Satellite, being in geosynchronous orbit must be above the equator and the rooftop of DC Comics is WAY north of the Topic of Cancer, and... oh, never mind, I'm getting a headache.

"Heh, by Rao, you sure are 'comical', Arrow. Yes, the tube is small, but that would help contain the debris if were to, say, accidentally sneeze or have an eye spasm and nuke your insides with my super-vision till you explode in a bloody mess."

Anyway, the teleporter is handwaved as Thanagarian tech (presumably based on the Twin Dogs of Sebek, but that's another story), and the Satellite is explained as...

Um. Well, it's just... there. Who built it and when? How was it paid for? Who chose the color scheme for the decor? And how (literally) on Earth do the governments of the world feel about a Satellite of godlike beings hanging over their heads?

"Surprise! It's actually not a teleporter, just a big Kryptonian crystal cannon that shoots you out to land as a green blotch somewhere on the lower east side of a very large city on the Eastern seaboard! See, Ollie, I can be comical, too!"

And (most amusingly), how did all this happen without Green Arrow knowing a single thing about it? That, I think, says everything you need to know about Green Arrow's place in the Justice League (as even written by Denny O'Neil, who loves him most).

You know damn well the Martian Manhunter would have known about the Satellite. In fact, since he's a crazy homeless person, he'd probably already be living in it and named it something weird, like "M'artha".

And so, with the introduction of the Satellite (Feb 1970, by the way), the Bronze Age begins for the Justice League of America.

It's clearly not above the equator; that shadow on the right (Batman? Flash? ) says it's 22.3k miles above The United States, which last I checked doesn't extend to the equator. They said geosynchronous, not geostationary, so they just happen to be above the US at the time - and, since it's a geosynchronous orbit, they'll be above the same point at the same time every day, for ease of scheduling meetings. :)

Ah, transporters. Those things are so much more dangerous than rockets or airplanes. The JLA's is gonna get hijacked by all kinds of aliens and supervillains.

>>>And how (literally) on Earth do the governments of the world feel about a Satellite of godlike beings hanging over their heads?

Well, back then, the world usually trusted Superman implicitly, despite years of him going as nutty as a Red Kryptonite cheese log every few months or so. The world trusted him because, hey, when you think about it, what were the world's options?

For the heck of it, I checked the GCD to find that in the same month that the JLA were fighting Demmy Gog, the Teen Titans were getting pwn!ed by a non-powered jewel thief while the Doom Patrol had died the preceding month. Not really a good time for DC super-teams, I guess.

Hm, think of that, the Doom Patrol died right before Denny O'Neil came on board. How...something.

Boy, the Atom doesn't mince words does he? Which automatically moves him higher in my regard.

Incidentally, Ollie is lucky that Superman is only the type to THINK those kinds of thoughts...rather than act upon them.

Superman's not even the type to THINK those kind of thoughts. That was *Scipio*. But you knew that. ;-)

Superman puts up with Jimmy Olsen AND Lois Lane every day. And later with Steve Lombard. Compared to that crowd, Green Arrow'd be almost a genuine breath of fresh air...

Given that this involves Mr O'Neil, I first read that as "Denny Gog."

Actually, Ronald, Superman puts up with Jimmy and Lois's STUPIDITY (in fact, he relies on it); he does not need to put up with jackassery from them.

Lombard, yes; but that's CLARK putting up with it, NOT Superman. :-)

More change of lasting impact happened in that brief run of Denny O'Neil issues than in any other comparable run of any JLA incarnation! I have a love/hate relationship with Denny O'Neil, but this run was so awesome, I can forgive General Demmy Gog.

Black Canary the first member "never to have had her own book"?

Hm, what I meant, odkin, but which I phrased quite wrongly, was, "at the time she joined the League all the other JLAers were headlining or had headlined their own books."

I wasn't counting Martian Manhunter, because, well... he wasn't IN the League any more; he had just left.

I was counting the GL/GA book as Green Arrow having a book... but you comment makes me realize I had the timing wrong; that happened LATER in the year.

She DID have a Golden Age pedigree, and that certainly was in her favor.

H, I think we can all agree to praise Denny's attempts to revitalize and modernize the DCU. Heck, for doing that with Batman alone he deserves undying praise.

BUT...that does NOT change the problems with his writings. I try to keep considerations like that separate. In some ways, the fact that Denny had the impact he did WITHOUT being Shakespeare makes what he accomplished even more impressive.