So, who was it who ended the might "Secret Sanctuary" Era, which gave us the Justice League at their most iconic, reintroduced the superhero community back into the DCU, and set the model for all subsequent versions of DC's team of top-tier heroes?

Why, it's obvious, really: it was their weakest link, Lucas "Snapper" Carr. 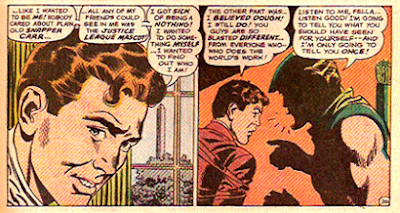 As mentioned, Snapper Carr was the hip teenaged mascot of the Silver Age Justice League. Gardner Fox's idea of putting DC's greatest superheroes into one team was genius; his idea of creating giving them a "typical teenager" mascot for the readers to identify with... was not genius.

Snapper's horrible, mangled faux-hepcat lingo was an assault to the senses, an icepick in the ear, the offspring of the English language being raped by a hundred maniacs. Poor DC; they were just trying to reach out to The Young People, but the writers--laughably unfamiliar with young culture through anything other than its dated, funhouse portrayals on television--were no more prepared to do so than your grandmother would be ready for her improv rap solo at karaoke night.

The pain of "Snapper-speak" aside, Carr's presence in the JLA was going to be a problem regardless. Snapper was put in the awkard position of either

(A) being a useless distraction for the JLA from actual crime-fighting
or
(B) of saving the day with some ridiculous "Wesley Crusher" moment.

In a series where you have DC's seven most powerful and popular superheroes--each of whom did (or could) fill one or more comics a month with their own exploits-- vying for panel-space, every second wasted on Snapper's birthday cake, Snapper's finals, Snapper's date at the funhouse, Snapper's flying jalopy, or Snapper's homework assignment was an eternity of wasted opportunity for the reader. 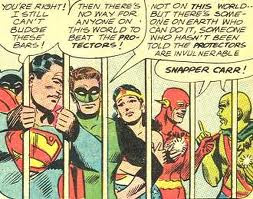 Snapper was an attempt to connect the Silver Age Justice League with someone "ordinary". And that was what doomed them. In a story that was, per Denny O'Neil's usual style, an interesting underlying concept but terribly written, Snapper is seduced by a grassroots movement for 'normal' people, distressed at how extreme and super people like the JLAers were overshadowing the mass of regular people who don't just occasionally dabble in saving the world, but who keep its spinning every day with their efforts. 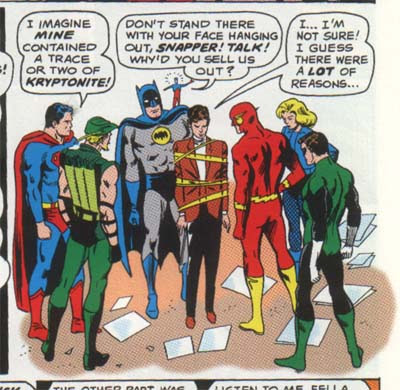 Snapper's seduction into this movement isn't well handled or made believable... but it is a great idea. In Marvel, citizens are often shown to fear and distrust many of their heroes. This is a harder sell in the DCU, where any superhero worth naming has his own hometown museum and is on the authorities' speed-dial. But the idea that regular people would simply resent superfolk and worry about becoming reliant on them is quite realistic. This was also underlying concept of the well-written LEGENDS crossover miniseries that launched the post-Crisis DCU and was the only time, in my opinion, that Darkseid has ever been used well, if you're interested.

So Snapper-- the "JLA mascot"--becomes a movement spokesperson against the JLA. It is a devasting PR coup for the Normal Movement, masterminded by "Joe Dough, the Most Average Man in America" (heavy-handed character name and sobriquet courtesy of Denny O'Neill, the Most Non-Subtle Writer in Comics). After "Dough" convinces Snapper to give him the location of the JLA's "Secret Sanctuary", he is revealed to be none other than... the Joker. 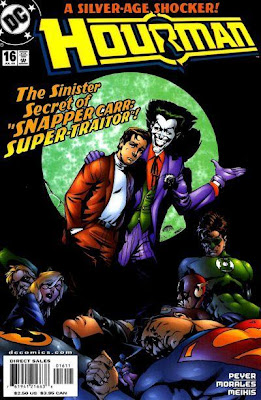 Ouch; that hurts. On the one hand, the Joker is a supremely odd choice for orchestrating the undoing of the Silver Age JLA. For one thing, the Joker, for all his popularity and cultural resonance, is not exactly a "take on the JLA single-handed" level of villain. Plus, his reveal at the end is a one-way panel throwaway twist at the end of the story. He didn't need to be the villain of the piece at all; it might as well have been some 'normal person' bent on overthrowing the JLA.

On the other hand, the Joker is a perfect choice. First, he's "powerless", and his triumph (he kicks the JLA's asses with some crap from the Trophy Room) is a victory of the non-superpowered over the godlike Leaguers. Second, although powerless, he is very very much NOT normal. At all. That the Joker, of all people, should pass himself off as the sympathetic spokesman and leader of 'the common man' is a horrifying deception. Third, the Joker's victory is ideological, ironic, and accomplished through superior psychological gamesmanship, all of which is very typical of the character. Fourth, after 15 years of fighting a host of new and entirely ad hoc universe-shaking adversaries, the JLA is taken out by a single villain from one of their member's Rogues Gallery-- in fact, the most familiar villain imaginable--is a cruel irony, indeed.

Perhaps it was a brilliant commentary by Denny O'Neill on the JLA's problem: they were too distantly focused on otherworldly issues (or Snapper's birthday) to focus on cleaning up their own backyards of the villains who preyed on the common folk. Or perhaps it was a lazy last minute twist. In either case, you do not mind-wipe the Joker, so the Secret Sanctuary's utility as a headquarters for the Justice League was over.

Don't stand there with your
face hanging out, Snapper! Talk!
Why'd you sell us out?

If we count the "d" as inflectional rather than syllabic, I finally got a full Atom haiku.

Heh. I was wondering whether anyone would notice that before I posted it....

Now I need to read hourman again... thanks for posting that cover

There is a small group of heroes that I absolutely abhor...including Red Tornado and Geoforce...but HEADING that list is Snapper Carr.

I assume that the only reason they have for keeping the little cretin around, is that he has some highly compromising photographs in a safe deposit box somewhere. Superman should stop getting cats out of trees and REALLY look for that box one of these days!

Well, Sally, I may disagree with you about Red Tornado, but I'm firmly on your side when it comes to Snapper Carr. Snapper makes Wendy, Marvin AND Wonder Dog look like a stroke of genius. I can't fathom why that buffoon gets dragged out from limbo every decade or so. Anything he's in dies. He's like white Kryptonite for comics.

So, what was Green Arrow only going to tell him once?

This may or may not be common knowledge, but Snapper's presence with the JLA was eventually "explained" as being because, not unlike Scooter on "The Muppet Show," his uncle owned the theater. Snapper's uncle Simon Carr provided the JLA with the Secret Sanctuary to begin with, giving him a built-in excuse to sort of act as Unk's substitute landlord, I guess.

Dig that Snapper! He's like, a real gone daddy-o!

Snappers' real inspiration was the early-60s contemporary popularity of comic relief/sidekick Ed "Kooky" Byrnes on TVs "77 Sunset Strip". He spoke the same way, and his schtick was combing his hair all the time, much like Snappers' snapping.