Meanwhile, at "the beginning of the end" for the Secret Sanctuary Era of the Justice League of America...

As mentioned in our last post, after Red Tornado's disastrous arrival, Black Canary arrives to Earth-1. Like all Golden Age Heroes worth their salt (and associated with the Justice Society), when the Silver Age arrived Black Canary was determined to live on the parallel world of Earth-2. UNTIL...

a disastrous team-up between the JLA and JSA, where her husband got killed. For no particular reason (although I will blame Red Tornado), the JLA and JSA join forces to fight the usual Ersatzian Threat. You know, some cosmicky extra-dimensional, one-shot villain, with vague motivations. This time, apparently, the moon was in the seventh house, because they fought Aquarius, the Living Tiki Mug.

He really needs to be wearing a paper umbrella behind his ear. 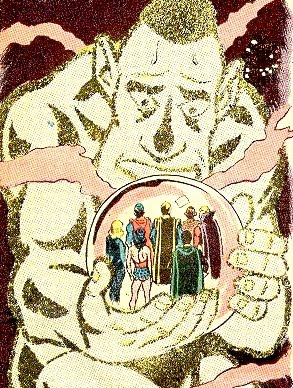 The JSA Snowglobe is still the most popular purchase at the Earth-2 Gift Shop. 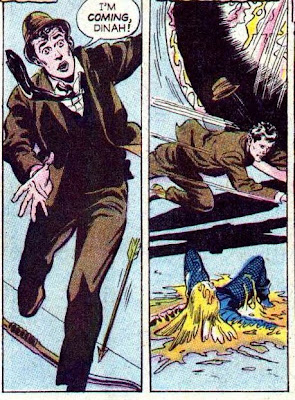 C'mon; you didn't really think I'd posted that just for fun, did you...?

Oh, and, to be honest with you; that's NOT a ball of lint. It's a ball of cosmic power from Starman's rod. Yes, let's repeat that. Black Canary's husband was crushed to death by a ball of power from the cosmic rod of her ex-lover because she was glued to the ground with her legs open by the stickum-shaft of her future lover, Green Arrow. Top that, Scott Lobdell.

This is kind of ironic, since Larry was always a classless jerk, a shiftless freedloader and skeevy gumshoe who was a millstone around Canary's neck. 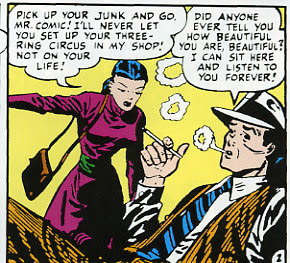 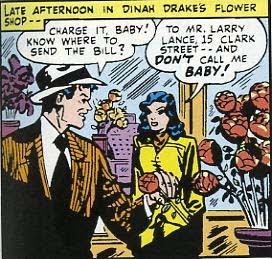 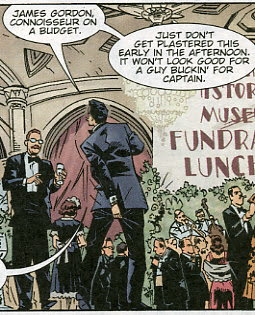 What a charmer. No wonder Green Arrow looked good to her.

Of course, what happens afterwards is even more ironic: she takes up almost immediately with another classless jerk, the self-righteous blowhard and skeevy crimefighter who's the reason her husband is dead. 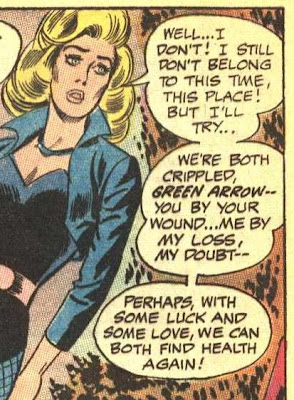 "We're both crippled, Green Arrow; you by your ridiculous facial hair...me by my 20 lb. Tammy Wynette wig."

You see, once Larry is dead, Black Canary does what any grieving widow would do... 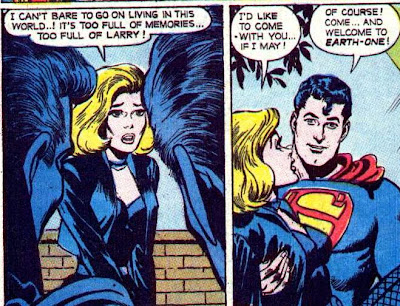 Panel 1: "This entire universe reminds me too much of my husband."
Panel 2: A panel that reads very, very badly out of context.

In the process of migrating to Earth-1, Black Canary--somehow--acquires a superpower: -superscreaming. 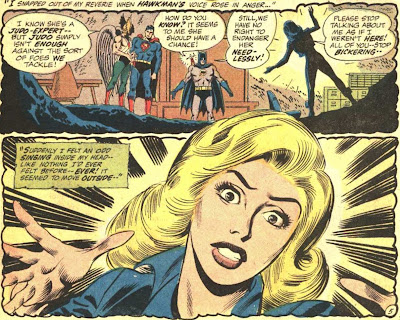 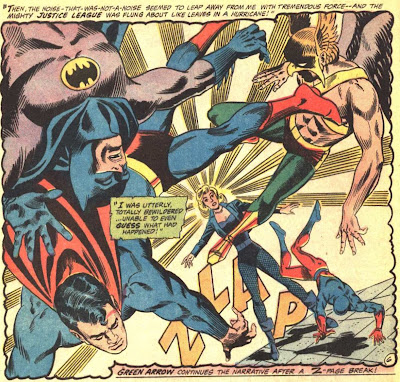 Actually, if you pay attention to the story, you notice that Black Canary's power is NOT generated by her voice. It's psionic; the 'canary cry' is something that she generates with her mind, not her voice. It's more sensible, I think, and something I'd like to see reasserted when she is reintroduced as part of the Earth-2 JSA in the New 52.

Black Canary gains superpowers right after Wonder Woman loses hers. This is perfect timing, because now she can join the JLA to take the place of Wonder Woman, who having lost her powers, quits the group, and takes up a new hobby:


"What in Hades did you drag me to a carnival for, old fool? Can't you see I'm not dressed for it? Oh, that's right; you can't." 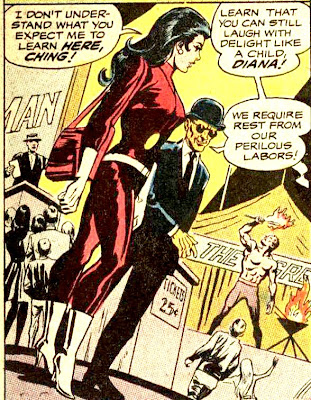 "To teach you the simple childlike delight of laughter, you brain-dead cow. Now LAUGH, wench, LAUGH."


Coincidentally, this blissful little scene of Wonder Woman and I Ching snipping at each other is the beginning of another nail in the coffin of the Secret Sanctuary era, which I like to call...

"RACE WAR TO THE STARS!" So, stay tuned.

Wait, though, isn't this Black Canary actually the mother of the one that ends up with Ollie "Stickum Shaft" Queen?

(I mean, kinda sorta, possibly with some mind transfer nonsense going on in there as well...)

Heh heh. No, no, Jeff; that's a post-Crisis retcon. That doesn't happen until more than 15 years after this.

The Black Canary that sucks face with Ollie all through the Bronze Age is the one and only Golden Age Black Canary, widow of Larry "The Pancake" Lance.

Hey, I don't know if there will ever be a right opportunity to post this, but since we're talking Earth-2 ...

Turns out there is a real-world precedent for Al Pratt, the Atom:

Well, don't forget the pre-Crisis Black Canary retcon that Roy Thomas trotted out. I think it worked like this:

1) Black Canary had a daughter with a mutant scream power that was so dangerous, Johnny Thunder's thunderbolt sent it to the limbo between dimensions, where it could physically mature while unconscious.

2) When Black Canary traveled from Earth-2 to Earth-1, she actually died en route, but her consciousness entered the body of her daughter, and completed the journey as a young woman with a canary cry.

I may be off on the details, but that's the gist of it.

I really want you to write comics about Wonder Woman during the I Ching era, Scipio. The conversations you construct for them are among the most entertaining dialogues I've ever seen.

A strange typo, don't you think?

Looking at that panel of Larry Lance being run over, I have to wonder: Did the Comics Code Authority ever actually DO anything once they'd put EC out of business? Or were they just utterly deaf to even the most obvious of innuendo? I mean, that's nearly as bad some Golden Age Wonder Woman panels.

"Bad" here meaning "hilarious either when taken out of context, or when read with the context very strongly in mind".

@duncan: Almost makes one think Tom Brevoort was editing comics back then, doesn't it?

@Beauregard: I hate to be that guy, but one minor correction to your account. Black Canary's daughter wasn't a "mutant"; the baby was given the sonic scream that it couldn't control by the Wizard, as revenge for BC's instrumental role in defeating his second Injustice Society. Which only adds to the lunacy.

@TotalToyz: Thanks for the correction, you may be "that guy" any time you want. Wasn't there also a twist that Johnny Thunder was secretly in love with the original Black Canary and that was part of why all this nonsense happened?

The more I think about it, why did any of this Earth-1/Earth-2 lunacy have to happen at all? If O'Neill wanted a Black Canary on Earth-1, an Earth-1 Black Canary could have emerged the way a Flash and an Atom and a Green Lantern did. This whole business of traveling from Earth-2 to Earth-1 gained us nothing. If O'Neil was desperate to write a grieving widow, he could even have had the Earth-1 Larry Lance die somehow. Graah, stupid comics!

Oh,yeah, her grieving kept Green Arrow's tongue out of her mouth for, oh, at least four months.

This is completely off topic, but what happened to the radio station you had running in 2005?

Don't know; haven't thought about that in years.

Dale, we don't have much backstory on the New 52 version of Black Canary yet. She's wanted for a murder (that she did't commit, natch), but that hasn't been explained any further.

Birds of Prey has been too busy adding new members each issue to delve much into the backgrounds of the characters yet. Right now, Canary, Starling, Katana, Poison Ivy, and Batgirl are part of the team, and I believe Huntress will be joining when her miniseries ends.

The whole Black Canary I/Black Canary II thingie makes my head ache. But regardless of which Canary it actually was, she obviously had a thing for jerks.

And frankly, Oliver Queen is the KING of Jerks. God, I love him.

If O'Neil was desperate to write a grieving widow, he could even have had the Earth-1 Larry Lance die somehow. Graah, stupid comics!

Actually they did later introduce an E-1 Larry Lance, who was a gangster and who did die. It was a Brave and Bold story, if memory serves.

Since IIRC per "New 52" there were never any super-heroes, EVER, at ALL, until five years ago, OSLT, I'm presuming there was no earlier Black Canary.

Supposedly (and I'm only repeating what I've seen elsewhere, please don't "take my word" for it), the JSA and all relevant continuity has been shunted to...

After a Red Queen's Race that lasted over 25 years, DC has finally slowed down enough to end up back where they started.

On another note, re Earth-One Larry Lance, I'm guessing that was a Bob Haney B&B story. Supposedly, Haney was notorious for getting continuity wrong or ignoring it entirely -- depicting Catwoman as a murderer, for instance, when it was well-established that Catwoman never killed -- and supposedly Bob Rozakis finally declared that all of Haney's B&B stories occurred on Earth-*B*...Earth-BOB. Add Twin Peaks joke and/or Sub-Genius joke here.

Something I don't think has been mentioned yet is that the golden age Black Canary also used to date Johnny Thunder. And Johnny Thunder wasn't a JERK so much as he was a MORON, so, you know, she had THAT much variety in her tastes.

>>>If O'Neill wanted a Black Canary on Earth-1, an Earth-1 Black Canary could have emerged the way a Flash and an Atom and a Green Lantern did.

No no no no no, only John Broome, Gardner Fox, etc. could get away with that sort of thing. Even in later decades, the golden age Air Wave and others were specifically STATED to have migrated from Earth-Two to Earth-One. No doppelgangers needed apply.

Speaking of Flash, Atom, and Green Lantern (all of whom debuted in Showcase) reminds me: Scipio, I am respectfully requesting/hoping that at some point you cover Showcase #100, which was basically a dry run for Crisis on Infinite Earths. Seriously, red skies, planetwide disassters, characters from other eras, vaguely defined overall menace, cameos by Sugar and Spike, it was all there. Plus I think it was Binky's last in-continuity appearance pre-Crisis...