The Ballad of Barry Allen


Get out your mandolins, everyone! It's time to sing along...

Sung to the tune of the "the Ballad of Barbara Allen" He sent her killer to his grave;
His issues still weren’t selling
Praying you must buy my new comic now
For Flash to stay Barry Allen 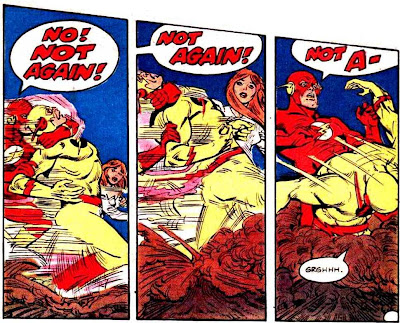 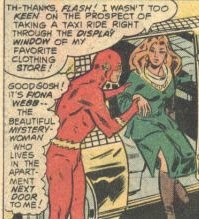 As she was dating Barry then
She heard the church bell knelling
And every stroke it seemed to say
“You won’t be Mrs. Allen!” 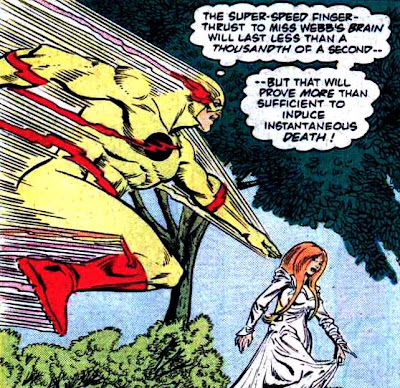 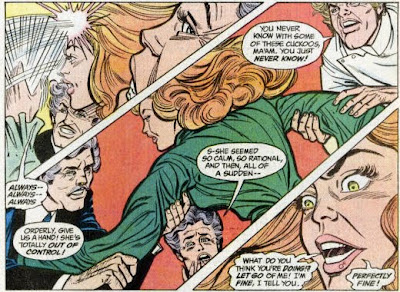 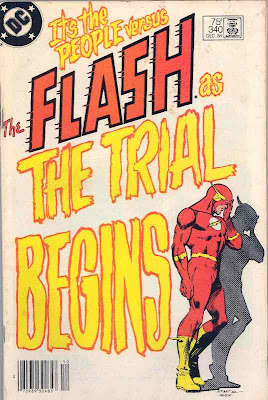 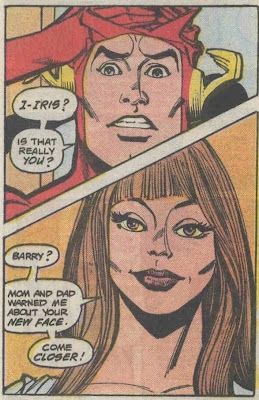 Then Barry died; then he came back
Reverse Flash he did likewise
And he untied their timeline’s knot
The Flash without his fishwife 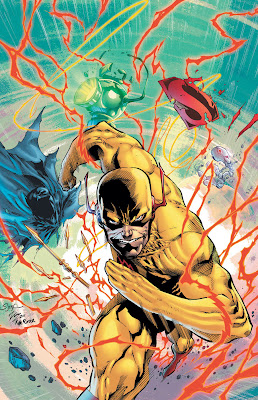 Iris West wouldn't have been murdered... 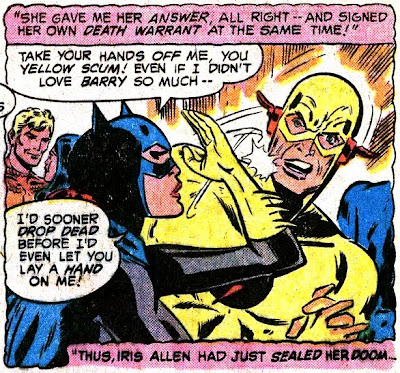 if she weren't so MEAN.


As mentioned in my previous post, I'm celebrating the marriage of my wingman, CobraMisfit, by discussing here some marriage-related fixes that DC's Universal Reboot is effecting. Last time, I took on the one people are paying attention to: the retconning away of Superman's marriage to Lois Lane. Today, we look at a more surprising, but even more welcome, turn of events:

I'm sure it's puzzled a lot of younger readers, many of whom know Barry Allen mostly as Wally West's uncle by marriage. For them, Barry's pretty much always been defined by his marriage to Iris. In writing about Barry in the post-Crisis era, nostalgic authors have worn rose-colored glasses made of pure retcon. Not only has Barry been portrayed as "a saint" but he and his wife have been portrayed as "soulmates".

Which is, of course, patently ridiculous. 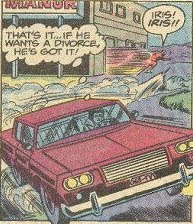 Later in this issue, self-absorbed Iris causes a major highway pile-up, demeans Barry, dresses up as Batgirl, and gets murdered. They don't write 'em like that any more, folks.

If you saw this couple in a department store,
"what a delightful couple" would not be your first thought.

Barry, in turn, took secret glee in outwitting Iris by playing innocent. So deceptive was Barry that never told her he was the Flash, even when they got married-- she figured it out herself only because Barry talked about it in his sleep. Then she kept the fact that she'd discovered it secret. Because the foundation of a solid marriage is mutual deception and lack of respect, apparently.

Charming woman. This is same night she died. Pity!

Now, I don't mind retcons; without them, DC's upcoming Universal Reboot wouldn't be possible. But I like my retcons "pure". I'm okay with "Event X never happened"; in the long-term, continuity almost requires the ability to decide in certain circumstances that something specific in an older story be redacted. The example that always comes to my mind is the original reason why Harvey Dent couldn't receive plastic surgery right after his accident: the only surgeon capable of performing the necessary procedures was trapped behind enemy lines in Nazi-occupied Europe. Changes in science and society often require 'tweaking' such aspects of older storylines.

In addition, there are times when, as the old Classical saying goes, "even Homer nods". Writers do err. When they get a name or someone's backstory wrong, a no-fuss retconning away of their error through consensus of reader and publisher does no harm and much good.

But it is not appropriate to "oops" away the entire history of a character's personality. Countries come and go, science is a moving target, and mores evolve. But Clark is always mild-mannered, Lois is a bit too adventurous for her own good, Alfred is faithful, and guns really aren't Batman's style. If characters are written too far distant from their defining characteristics, then you're actually using a different character entirely. Even Geoff Johns, who clearly likes Hal Jordan a lot, doesn't try to portray him as a rocket scientist. Sure, he may not show him whacking his head on every STOP sign he flies by, but it's still clear enough that Hal's not among the more intellectual leaders of the Justice League.

In the context of our current subject, my point becomes: Iris West was always a ball-busting shrew. In fact, she had virtually no other notes in her personality. Writing Iris West as some sort of wonderfully supportive working-wife exemplar is not a simple retcon, it's character assassination.

Oh, Barry. You're so vain, I bet you think this post is about you.

So, too, Barry Allen. What kids today probably don't know is that both Barry and Iris had other romantic connections crop up during their eons of dating and that less than a year after Iris died, Barry was major-league macking on his neighbor. Apparently, Barry's new life-style involves removing
all furniture and breakables before having a date.
Not that I'm judging, mind you. 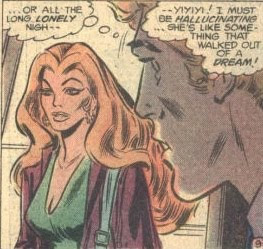 Well, either she walked out of a dream or a drag show.
Not that I'm judging, mind you. 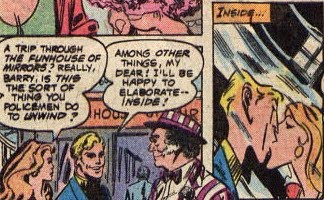 Fiona and Barry. Now there is a perfect couple: he's fast, she's loose.
Is there anything LESS discreet than making out in a fricking hall of mirrors?
And, yeah, I am totally judging them.

That's a year of OUR time by the way. In comic book time that would probably be about, oh, a week, give or take an issue. Before you can say "Barry's yer uncle", this woman (Fiona Webb) was headed down the aisle for Barry as the next victim for the Reverse Flash (who never had an original idea is his life, by the way). It was for HER that Barry killed the Reverse Flash, not Iris.

Given all that, I'm pleasantly surprised that DC is ratcheting back to a point where Barry's still single and Iris is just an option. Frankly, I'm not interested in seeing another unrealistically idealized perfect power couple in Flash. Mercury knows, we suffered through decades of treacly pap about Linda "The Anchor" Park during the Wally West era.

However, I'd love to see a couple of decades of Barry "the Player" Allen versus Iris "Meanest Woman Alive" West. Now there's potential for some sparks! And for once their relationship -- the guy too fast to pin down and the woman who can cut him down to size -- would finally make some sort of sense.
Posted by Scipio at 1:45 PM 28 comments: