Long before there was the somber and power-mad Martian Manhunter, there was timid but carefree Monstro the Martian.
Absorbascommandos will remember Monstro as the Martian that the Shield beat the snot out of.
Turns out the joke was on the Shield; despite the shellacking, Monstro rather liked Earth and hung out with the Shield for an issue or two. How annoying to have a mind-reading, shaping-changing Martian hanging around while you're trying to be a brightly dressed crimefighter! And, unfortunately for the Shield, banishing him to Stormwatch isn't an option.
Still, the Shield and Dusty, as true heroes, are committed to protecting him; as true Americans, to welcoming him to our shores; and as true gentlemen, to serving politely as his hosts. 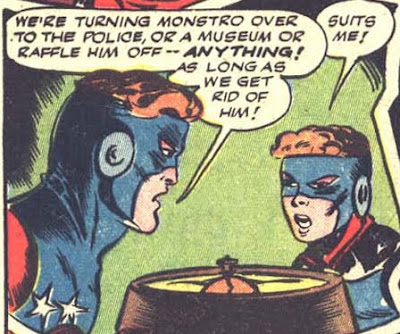 Hm. Perhaps I misjudged them.
Anyway, before they give Monstro the bum's rush, Shield does try to convince him to leave of his own volition. In fact, he even sacrifices correct grammar to do so ...
in haiku! 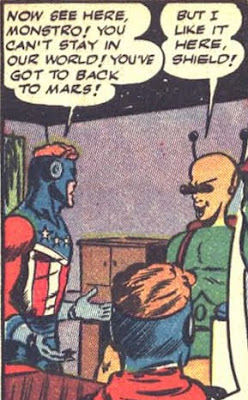 "Now see here, Monstro!
You can't stay in our world! You've
got to back to Mars!"
Wow. He even dropped the word "go" from his sentence completely, simply so he could make his word balloon a haiku. You've got to admire the Shield's commitment to heroic haiku, if not his craft.
But Monstro is easily a match for the Shield. Adapting like Martians do, Monstro dismisses the Shield, believe it or not...
BY ANSWERING IN HAIKU.

"But I like it here,
Shield! Ho-hum, I'm tired!
I think I'll lie down..."
Sneaky Martians; always outdoing you and copying your haiku-making powers! No wonder they're not allowed in the Justice League.
Can you out-do Monstro with a haiku commentary of your own?!
Posted by Scipio at 6:48 AM

Email ThisBlogThis!Share to TwitterShare to FacebookShare to Pinterest
Labels: Haiku, The Shield

Pity poor Monstro,
No one will take him in now.
Let's try that raffle!

In the golden age, people from other planets, other dimensions, other time eras, and so on frequently visited Earth and decided to remain, despite the whole "most intense international combat in planet's history" thing going on, which one might reasonably consider a tourism turn-off. Not many did so solely to become a comic relief character, though...

Beat him up and he
Wants to stay? He must be a
Sado-masochist.

He may speak English
And has useful skills, but still -
Earth is for humans!