When last we left Supergirl she was fighting ... THE GANG!

And lest you forget who they are, the Absorbascon is proud to present:

THE GANG: WHO THEY ARE AND HOW THEY CAME TO BE! 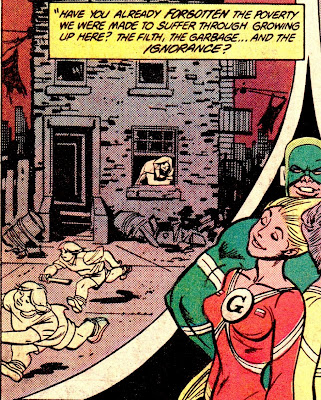 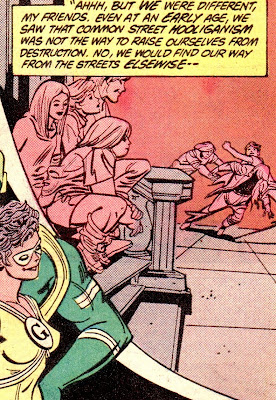 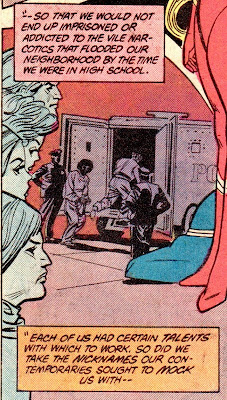 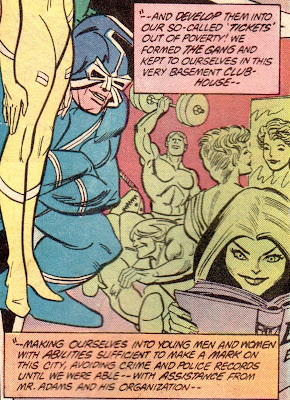 You know, if this weren't really poorly drawn, really badly written, and eight times longer than necessary, this would be a great one-page origin.

At this point, the Gang has already defeated Supergirl once, entirely by way of a Jedi mind trick from Ms Mesmer, and her Hypnotic Third-Nipple. 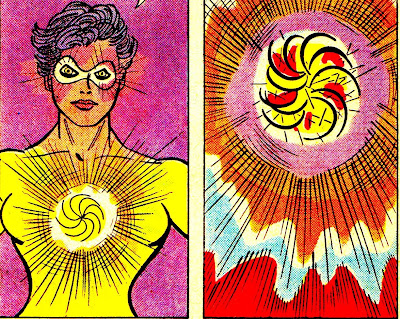 It's ... it's nip-notic!
She runs into them a second-time at (duh duh DAH!) her own apartment building, where they attack her actor-neighbor, John Ostander, who's just an actor, for cryin' out loud... 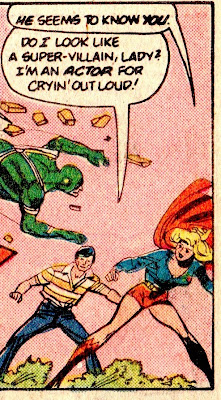 Just shut up, John Ostrander! I'm sure you're a lovely man in real life, but I want to club your Earth-1 version to death like a baby seal.

...and where they promptly kick her butt again. 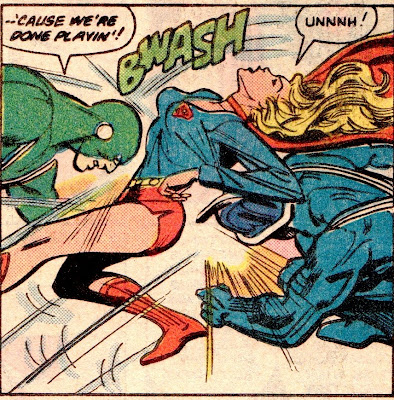 This one I'm not even going to bother making a joke about. 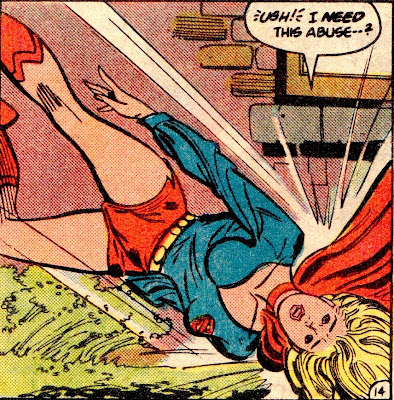 Um .. yeah, Supergirl. You really do.

"I need this abuse--?" Why has Supergirl started talking like her alter kocker landlady Mrs. Berkowitz? Has her history as a continuity pinball left her a super-Zelig, instantly blending into whatever new life-of-the-month the writers give her? Just how suggestible is she?

In fact, Supergirl is very suggestible, since in mid-fight Ms Mesmer gives her another mind-whammy. Without, it seems, even talking to her or looking into her eyes or spinning her third nipple or anything else traditionally mesmerizing. 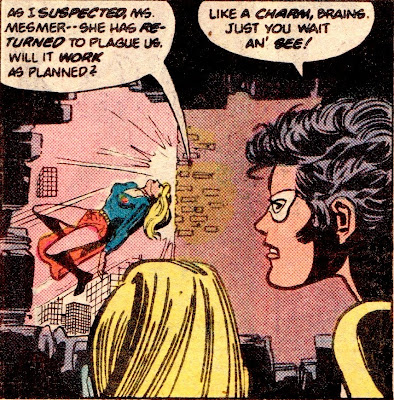 I didn't realize mesmerism was a ranged-combat action.

She convinces Supergirl to see her greatest fear, namely: 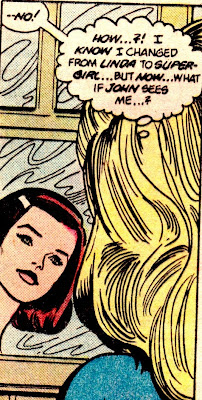 I guess Supergirl falling for this magically perpetrated mesmerism makes sense, character-wise. After all, she spent most of the Silver Age hypnotized into debasement and penury by Superman's repeating the phrase: "You're my secret weapon!"


Lord only know what else Super-perv hypnotized her into! 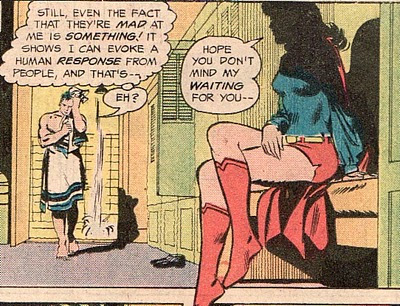 Stolen, by the way, from this amusing Supergirl site.

I don't know what the other Top Ten Things Supergirl Should Never Say are,
but high on the list is "Sorry about the super-speed snatch."

The Danversezes convince Supergirl she's off her rocker (who would know better?).

"I couldn't make a mistake about my street clothes, could I....?"

Well, my answer would be "yes" judging from this picture of your street clothes: 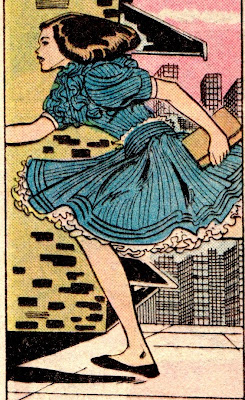 Meanwhile THE GANG drags Actor John Ostrander to their high-tech headquarters on the south side of Chicago. 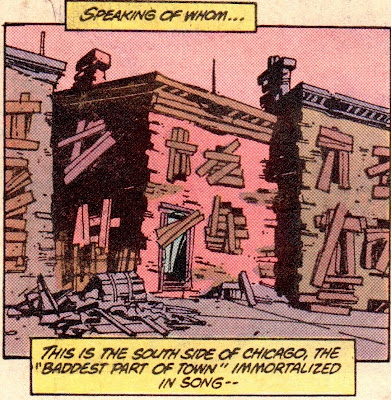 Actually, beneath this windowless hovel lurks their evil den of inadequacy. 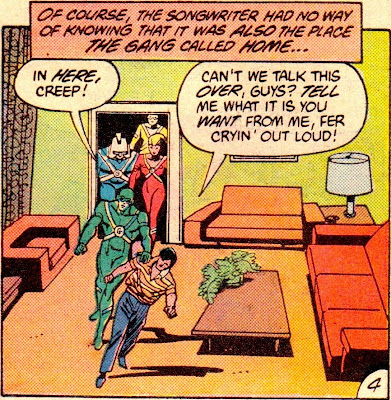 Whoa. With furniture from the Central City "Horizon-Ass" collection. I bet on winter nights, they all curl up together in that seven-foot wide orange armchair, just like puppies. And is that a coffee table or a dissection slab?

My favorite is the potted plant on the coffee table of their basement lair. Priceless. 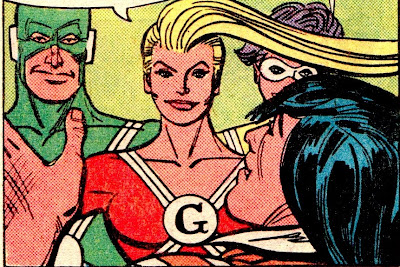 Wow. The Gang pretty much smacks Supergirl all over Chicago, don't they? Are there panels in the book where Supergirl isn't bouncing off a brick wall at odd angles while curled into a semi-fetal position? And isn't she supposed to be, I don't know, tough? As in Kryptonian tough?

It might be heresy, but I cannot stand Carmine Infantino's art.

Me, either, Ostrakos. I have never understood the veneration of his work. Although I'm sure he was a wonderful person.

I love Infantino's Silver Age work and even some of the 1970s stuff, but the SUPERGIRL stuff is a mess.

Though it's still marginally better than his embarassing return to THE FLASH.

Count me in for being unimpressed with the 80s revival of Infantino art. Even as a 12-year-old I could tell crap art when I saw it.

I don't know why, but this story feels like a bad issue of Dial H for Hero.

I agree that Infantino's Bronze Age art is horrible, but his Silver Age art really was great. I'm not sure what happened in the intervening period. Also, he's not dead. He's one of the few major creators from the Silver Age who isn't, at this point.

Star Wars was the beginning of my distaste for Infantino. He gave C-3PO eyebrows, for cryin' out loud.

But mostly he just made everyone look so wide and squat and square-faced...

In low-income neighborhoods (of any ethnicity), there are almost always some people who think that succeeding by following "the establishment"'s rules means "selling out to the man."

>>>Straight As and election to student council, followed by a scholarship to a good school, getting you out of a life of poverty and violence. But that's not THE GANG's style, apparently. Why do things the easy way?

Substitute "organized crime" for "THE GANG" and suddenly it's not as far-fetched...

Roel: Probably because the Gang's powers are very "H Dialish".

Bryan: You should see the 147 panels where Supergirl wrestles with her post-hypnotic phobia. For Rao's sake, just go into battle NAKED, woman!

Marcos: I think that's just so they fit in the chairs.

Anonymous: Point taken. However... since "the Man" is exactly and by name who the Gang works for, I don't think that's theirviewpoint.

Well I am just hornswoggled. I never knew that Supergirl had such...kinks!

I see what you did there, with the "Dial 'H' for Hero" wardrobe credit. Man, that takes me back.

Heh, well, actually, that was intended as a Katy Keene wardrobe credit.

Which takes one MUCH farther back... :-)

In my opinion, Infantino's art works well for some characters (see Brave and the Bold #72) and not so well for others. For Supergirl, not at all.

Still pondering a set of The Gang custom HeroClix...!!

DC at its worst. Infantino at his worst.

With efforts like this, is it still reasonable to assert that "DC is about story"? Marvel was kicking DC's butt at writing at this time.