I went with a crew from Big Monkey... 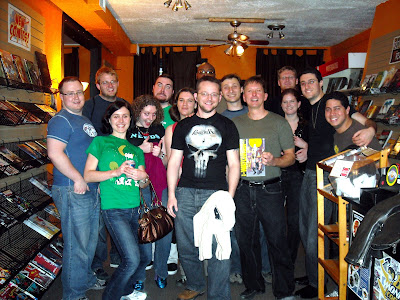 The rest of the guys joined us at the cinema. Chinatown never knew what hit it.
In short, I thought the film did about as good a job as it could adapting the book. On the whole, I agreed with what was left out, changed, or tightened.

I was most interested in what the film revealed about the differences in the mediums. Lines that were deadly serious in the book that earned belly-laughs in the film. Talk-y scenes (like the one at the bar in Vietnam) that are passable on paper, but are very unnatural when you seem them acted. Dr. Manhattan's SFX being cooler on the screen, but his abstract nature being a little less perceptible.

There was nothing "unfilmable" at all about Watchmen. To me, the main issues weren't that the book was too complicated to film, or that it was too rooted in the graphic medium to translate to the screen. The main issue was -- and watching the film with some 20-somethings really brought this home -- that the story is so firmly rooted in its time period. The 20-something have no personal knowledge of the time when "the Doomsday Clock" and things like "Defcon 1" were pervading cultural influences...
Posted by Scipio at 9:34 PM

Thanks for a great review. I agree. Overall, the movie summarized the book well--but still basically failed as a movie.

Not because the story had no arc--it did--but because the arc was too culturally irrelevant. (And there really wasn't a romance-at-risk for us to care about.)

It was like a serious movie asking us to worry about Napoleon attacking Russia. The politics have no emotional resonance.

"Not because the story had no arc--it did--but because the arc was too culturally irrelevant. (And there really wasn't a romance-at-risk for us to care about.)

"It was like a serious movie asking us to worry about Napoleon attacking Russia. The politics have no emotional resonance."

Right; history doesn't matter. The only thing that matters is whatever is in front of our faces, right now.

Nice review. When I went to see this movie I was ready for disappointment since the novel is very complicated and has its own genre. But I was pleasantly surprised. Yes it has its flaws and cliches but overall it's the best it could get. It even has an impact on current situation and sends a message to the world, although not everyone will be able to see that message. Nevertheless, it is an amazing movie worth watching. It wasn't made for teenagers but for serious movie fans and book fans.

I personally loved the nostalgia aspect of the film; I don't think the fact that we weren't really part of what was going on in the 80s should have a bearing on how good the film is.

And anyway, the whole balance of power thing isn't exactly irrelevant today. We'll always be fighting for dominance with someone, and we are today with Russia (still), Iran etc. I think we just tend to forget that these issues are still there today.

As for the film itself, I really don't get the negativity. It looked beautiful, and really makes you think. Still a bit iffy about the ending (Ozymandias in particular) but that hardly impacted my overall enjoyment.

I would agree wholeheartedly about the time period factor....I think anyone under the age of 30 has no personal connection with how frightening the prospect of nuclear annihilation actually was in the 80's....and Nixon is the cartoony supervillain from Futurama.

In addition, I was really unsettled by the role that women played in this story...it's been a long time since I actually read Watchmen, so possibly I just missed it the first time around, but there were three women who had any kind of role in this movie beyond extra; the original Silk Spectre who was in love with her rapist, the woman who was used to manipulate Dr Manhattan, and the second Silk Spectre who was only there to serve as someone's girlfriend. If this is a statement about the role of women in comics, it's quite clever. If not, it's a bit disappointing. Either way it left me feeling a bit uneasy...

From what I understand of Feminist literary critique, the scarcity of women in a story can be as informative as a plethora of them.

And I have to disagree with the Psychonaut's uncharitable assessment of the women characters who ARE prominent in Watchmen. For instance, Sally having feelings for a man who assaulted her is something that actually happens in real life on occasion and I think it makes her an amazingly complicated character. You see, the reader is so appalled by the behavior of The Comedian that we instantly despise him for what he did to Sally- we have the same perspective as her daughter, Laurie. When we discover that Sally not only has feelings for The Comedian, but she also chose to bear his child- our immediate response is one of shock and even outrage, just like Laurie. And yet, as Sally tries to explain what seems almost unexplainable- the richness of her as person shines through. She was able to forgive and feel sympathy and love for a total bastard and is victorious in transforming evil into good. THAT was her real super-power and it's even referenced in the little anecdote where a crime boss gave himself up rather than shoot her...

Maybe, Psychonaut, the problem is that you're too particular in what you think a "good" or "strong" woman character ought to be. From a writing stand-point, complicated and nuanced are better qualities in a female character than simply having them act aggressive.

Citizen Scribbler, I mostly agree with your point about the female characters. Yes, they're complicated and interesting characters. They are also tremendously broken, messed-up people, but there's not a single character in Watchmen who isn't. The Comedian and Rorschach are nihilist psychopaths. Dr. Manhattan is a detached, impersonal godhead. Nite Owl is a sad, lonely nerd. In company like that, both Silk Spectres come off looking pretty good -- they're emotionally damaged, but at least they have emotions.

If the concern is that they're too secondary and not central enough to the story, that's a somewhat fairer criticism; still, I'd argue that they're really two of the most central and important characters. Laurie and Sally, together, demonstrate the value of human life; in such a depressing and nihilist book, that's no small thing. And remember: it may look like Dr. Manhattan is the important one, and that all Laurie does is convince him to return to Earth, but once he does return, he accomplishes absolutely nothing. He's been outsmarted. For an embodiment of masculine power, he turns out to be remarkably impotent.

my immediate reaction to Watchmen is to feel haunted by the intense style and storyline -- haunted in a good way that is... overall i loved it