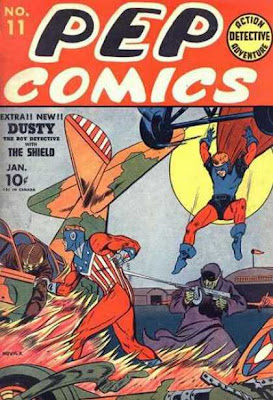 What kind of sidekick name is "Dusty"? That more like the name you'd give Ragman's sidekick!

The Shield is not a man of imagination. There are so many cool things you could name the Shield's sidekick:
But, no: "Dusty". Like a used rag. Or Bob Denver.

I bet the Shield didn't even bother to give the kid any superpowers. Maybe "Dusty" was the kid's real name.

Nah; what kind of star-spangled, patriotic hero would drag a non-superpower kid into battle with him and use his real name instead of code name? No one's that stupid or short-sighted.
Posted by Scipio at 8:50 AM

Oh, please tell me that he is that stupid and short-sighted! Are we going to see an "Origin Of Dusty" post here?

Also- I think I'm gonna go with The Kid Sieve.

Why you haven't been tapped yet to scribe a Shield mini-series is beyond me.

Hey, charging into battle with a masked aide who uses his REAL NAME AS HIS CODE-NAME is a pulp-era tradition! How nobody ever figured out that Britt Reid was the Green Hornet, when they BOTH had an Asian aide named Kato, takes suspension of belief into the stratosphere!

That said, I love the idea of The Shield and Buckler! That's rich!

With all the Dustys, Rustys, Buckys & Sandys running around, I just assumed that all those Heroes had named their sidekicks after their dogs.

Of course, no supervillain in the 1940s would be clever enough to take the name "Roy," trace it to Roy Rossman, and wait to see who R.R. hangs out with in his civvies. . .to discover the secret ID of the Wizard. (And then, you know, blow up his house, or his car, or something.)

Tsk tsk. That would hardly be sporting.

"Are we going to see an "Origin Of Dusty" post here?"

Was "Pinky" the real name of Mr. Scarlet's kid sidekick? If so, who wants to bet Pinky got the most wedgies in the golden-age hero sidekick locker room?

Of course, as long as we're talking about this, let's not forget Dan the Dyna-Mite!

Let us not forget the Terror and his sidekick.. um.. Tim?

I see either nobody got my "Rich Buckler" joke, or is choosing to ignore it. Fair enough.

All this just lends credence to my idea for FINAL KICKSES, wherein the sidekicks gather for revenge on the super-heroes who treated them so shabbily. Espeially by giving them names like Dusty, Sandy, Speedy, Pinky, Fatman, and Pieface. Or making them wear fish-scaled bikini briefs and Peter Pan shoes into battle.

"Kid Sieve" on its own is a perfect name for a young hero. Give him intangibility powers; it's perfect.

"That bomb is going to go right through the bank window! Quickly, Kid Sieve, catch it!"
"No probl -- WHOOPS!"