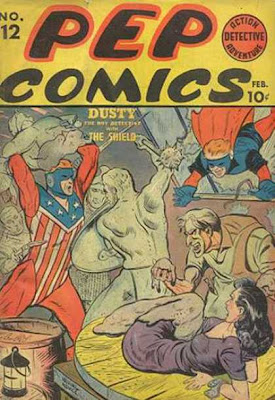 "Oh, Gladys, you won't believe what happened to me last weekend!

"So, there I was at the Skylight Spa-- you know, the one with all the statuary?-- getting my monthly mud-treatment, with the help of Edgar -- poor, deformed, otherwise unemployable Edgar. Such a sweet old man; he reminds me of my seventh grade shop teacher.

"Anyway, Edgar had lit the aromatherapy lantern and was giving me the Lazy Susan Special (tm) -- you know, the one with the straps, so you don't go flying?-- when that lunatic in the flag costume -- yes, the one who attacked those protesters down on the Mall -- kicks in the door and starts attacking the statues!

"Before I realized what was happening, he had broken one in half and was using it to pummel the other statues. Oh, but then it got worse: some crazed boy in a makeshift costume he must have cobbled together out of a used clothing bin crashes through the skylight with a maniacal grin on his face! Gladys, it was just horrible and I dashed out of there for my life, shaking off mud as I ran.

"And poor, poor Edgar. The doctors say he may never walk again..."
Posted by Scipio at 7:54 AM

That would make for SUCH a magnificent plot.

Edgar, of course, represents the fine art. The Shield represents commercial art. I enjoy that classic plot where comicbook creators paint the fine arts as the villian. One of my favorites is a Steve Ditko Question where the sculptor was upset he wasn't getting the notice he thought he deserved and performed crimes with one of his statues as armor. Question kicked his butt. ---RAY

Scipio, have you ever seen the cable show, The Dish? Hosted by Danielle Fishel? I think you'd be a great contributor for their segment, What The Hell Is Going On In This Ad?

Now I know how people feel when they read stuff like that that I write.

And I dig RAY's analysis. Although the story he refers to was a Blue Beetle tale where Ted fights the sculpture man (and for a different reason at that), but Vic Sage does appears in the story and has his own backup later in the issue. Blue Beetle #5 from Charlton to be exact- the series finale', sadly.