Pep 9: Water Passing through the Tunnel 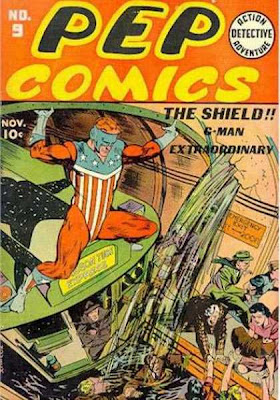 Hey, kids, look! It's the Shield, squatting with legs akimbo while a powerful stream of distinctly not-blue liquid pours down on some poor sap, threatening to drown him in a growing river. I wonder what THAT's all about... .

I guess it's just the Pep Comics' unique brand of action detective adventure.

Usually, Pep covers focus their powerful perspective backwards toward the horizon. But this one is about the "down" of it all. Clearly, we're being given a perspective similar to the Shield's, as he watches the hapless victims doused by the powerful liquid jet he can no longer contain. Ahem.

What I find most interesting about this cover is the depiction of the bystanders, who, instead of just bystanding, are actually helping one another get out of the collapsing tunnel. A realistic scene, yes, but not the kind usually see on a cover: the hero, essential in the rescue but stalemated by the situation, while the civilian have to save themselves. It's a nice touch and demonstrated the can-do, bootstrapping attitude that pulled Americans out of the Depression and through WWII.
Posted by Scipio at 7:47 AM

Off topic, there are new 3d versions of the Temple for Diana and the Spooky Churchyard at http://smg.photobucket.com/albums/v506/mathias42/clix/

note, I only did the church, I already had a pre-existing Graveyard, and I got lazy with the statue in the temple so I used an action figure that can be removed for play purposes.

I was going to make a comment, but need to go the bathroom.

It is covers like this that help me realize popular Fine artists like Roy Lichtenstein don't get it. (Yeah, I said it. Feels good to get it off my chest.)

The drama and subplots you exclaim are greater than you have discribed.

First I was going to point out that it was women helping the survivors while men ran away. On closer inspection, it is women helping women while men fend for themselves or run away. And Shield stand over them all, holding as much of the fragile structure of the status quo up as possible.

I am beginning to understand your appreciation of the Shield. One day I will write Superman professionally and this cover will be my inspiration for every story. ---Ray

What I find most interesting about this cover is the depiction of the bystanders, who, instead of just bystanding, are actually helping one another get out of the collapsing tunnel.

Amen, brother, and testify. In today's world of litigation and people who treat the law like a lotto ticket, bystanders wouldn't help each other for fear of getting sued down the line.

I've said it before, and I'll say it again...the Shield has got one pair of meaty meaty thighs.

Not that I'm complaining of course.

And hey, civilians who are actually doing something to help themselves is a good thing.

I'd love to see civilians helping each other more in the comics. I think it's a lot more believable than having everyone standing around stricken in terror while waiting for the hero to save their bacon.

And although I can understand your cynicism towards modern society, TotalToyz, I have to point out that my city of New York is full of ordinary little heroes who will risk their neck for you in a pinch. Every year, you hear one or two stories of folks leaping onto to the subway tracks to save a stranger's life. Mind you, half the time they were pushed on the tracks by one of our many maniacs in the first place...

Great cover- I particularly like the lady passing the infant to other lady.

Word Verification: Rewoot- when you have to go "Woot!" twice.

Yes, people should really pay more attention to how Golden Age covers told stories all their own.

Herpes Illness can be cured naturally, I was a former sufferer but I succeeded to get rid of it with natural remedies. I highly recommend Dr John to every ladies and male having issues about Herpes Cure I highly recommend. His Services includes Love spell (Get Ex back), Lottery spell, Promotion spell, Financial spell, viasiness Boom Spell, Voodoo etc he also help get the following Diseases cured Hiv/aid, Arthritis, -Fibromyalgia, -Osteoarthritis, Asthma
Borreliosis (Lyme disease), ALS Abdominal infection, Diabetes, Epilepsy, Lupus eMinimizetc DM Dr John if you are interested WhatsApp +2348131983338 Email (drjohnspelllord @ gmail . com) Thanks