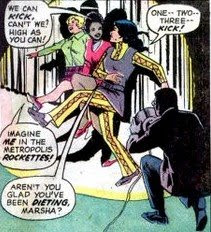 I ask all my readers to watch "America's Got Talent" this season. I know it's rather a lot to ask, and I wouldn't ask you to subject yourself to such a thing... but it's your best chance of seeing me sing and dance!
Posted by Scipio at 10:16 AM

In a Red Bee costume?

No; I'll wearing white tie and tails, in fact. At least, to start.

"and I wouldn't ask you to subject yourself to such a thing...but~~~"

That's quite an imposition, Scipio. But I would hate to have my fanhood questioned, so I guess I'll do it. And, no, the phrase "to start" is not exactly enticing.

So, will you be wearing a Vibe costume underneath? Because if you aren't, the alternatives are far too horrifying.

Hey, we implied it, but you inferred it!

So there IS hope for the Red Bee costume!

One would think you'd be Heroclixxing instead.

Now there's an idea! Celebrity Heroclix!
Hey, if people watch other people playing poker on TV, why not?

First appearance? So you got through to the next round? Do you win Ryan Seacrest?

And thanks for that old Lois panel - John Calnan art? I haven't read that story since I was a kid.

I'll totally watch it. Is it a network program? What channel? What time?

I know you're gonna be terrific because, dig this, my word verification is "bless". That's just GOTTA be lucky, right?

Are you going to tell us what you sing, or is that a surprise?

And I absolutely cannot believe that I've gotten three actual words in as many months on this site for word verifications.

I just hope NBC doesn't put this on opposite Lost. I'd be on the horns of a dilemma, there. One the one hand I really enjoy Lost and wouldn't want to miss an episode. On the other hand, Matthew Fox has never bought any custom Heroclix from me. Not yet, anyway.

"America's Got Talent" is on NBC. I'm told. Never seen it, actually. Yes, I'm going to be on a show I've never seen.

And I would LOVE to win Ryan Sechrest; WOOF!

"Are you going to tell us what you sing, or is that a surprise?"

"And thanks for that old Lois panel - John Calnan art? I haven't read that story since I was a kid."

You can read my take on it HERE:
http://absorbascon.blogspot.com/2007/05/groovy-chick-month-4-julie-jively.html

Well, you're doing it in white tie and tails...I think we can rule out any compositions by Led Zeppelin, Snoop Doggy Dog, or Hank Williams Jr.

I've loved that Julie entry for awhile (and just linked to it on a Captain Comics thread about Lois and Supergirl).

Let's campaign to get Julie back . . . I reckon James Robinson is a likely fella for this!

America's Got Talent is on NBC, although what day of the week can vary... my wife and I have been fans of the show since the first season, so if your audition makes it on the air, we'll definitely see you -- I just hope I'll be able to realize who you are, so I can turn to my wife and say, "I know that guy -- I read his blog!"

I usually talk up AGT on my own blog when the season's under way.

I'm thinking he's going to do a swell ditty by Cab Calloway.

I don't know why, but I suspect "Puttin' On The Ritz".

My wife and I are fans of AGT. We refer to it as "The Gong Show: The Next Generation", with Piers Morgan taking the place of Arte Johnson, Sharon Osborn as Jaye P. Morgan, and David Hasselhoff as Jamie Farr.
I hear Nick Cannon will be hosting this season. I doubt he'll make as good a Chuck Barris as Regis Philbin and Jerry Springer did.

My money's on "Anything Goes" or "The Impossible Dream".