Pardon, in advance, the extreme strangeness of this post.... Last night, I dreamt, quite vividly, that my mother had unbeknownst to me, been signed to write a comic book about a racecar driver/superhero, and that she had modestly begun to do so, with great success, without mentioning it to me.

That's pretty odd. Even for a dream.

But all day, it's made me wonder: what kind of comic book would my mother write? My mother has a rather dry wit and likes dogs, so I imagine her character would have a Rex the Wonder equivalent as a sidekick to utter Wildean canine commentary on the action. Any, it all makes me want to ask you two questions:
Posted by Scipio at 4:19 PM 17 comments:

Today, I am announcing my intention to read...

From some company called "Mar-vel". I think they're a Timely imprint.

Anyway, you may be wondering why I decided to sign on in advance for this particular ride. Several reasons...

While I've certainly read Marvel comics, I've never read any of its big crossover events. Such events seem more important to the Marvel Universe than in the DCU. Marvel Events seem like small-scale affairs that still have a real longer-term impact on the regular storylines. DCU Events are generally ENORMOUS in scale, but have little real long-term impact (other than sparking "Yeah, he was dead, but that was before Event Z" conversations and lines of collector figures). 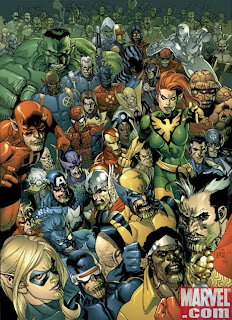 The subject is intriguing. Civil War seemed like just another hero-on-hero slapfest; typical Marvel situation where the heroes' problems are not with villains and serious outside threats, but lie with their inability to get along with one another or with normal people.

In many ways, Secret Invasion is just such a Marvel-ous story. It's about an inside threat, not an outside one. Friends turn out to be enemies. It's a story stemming from paranoia and fear of betrayal; the emotions of adolescence and the Cold War, the fertile soils in which Marvel found root and grew.

So what's the difference? Mystery.

As I've mentioned before, one of the reasons I prefer DC to Marvel is that DC storylines tend to be detective/crime stories. Secret Invasion seems like more a mystery; Who is a Skrull? Now, perhaps that will all be revealed straightaway and the whole event will simply unravel into another slapfest among heroes (some of whom will be wrongly accused of being Commies, er, I mean, Skrulls). After all, that's what happened in Marvel's greatest "mystery event", Identity Crisis, which began ostensibly as a mystery with intimations of an outside threat, a matter quickly overshadowed instead by internal conflicts among heroes and their supporting casts.

My interest in Secret Invasion is that it seems to work in reverse. What began as an internal conflict among heroes -- Civil War -- may be revealed to be, in fact, the result of machinations by an outside villainous threat (the Skrulls, finally being used to their full potential). Instead of raising questions about characters acting uncharacteristically, it may answer them.

Of course, you may find the whole concept a cop-out, thinking it sad that what was once an honest exploration of societal and political conflict among well-meaningpeople with varying viewpoints will degenerate into a sci-fi B-film about fighting Little Green Men.

Can we talk about Captain Atom today?

I'm no longtime Captain Atom fan. I mean, really; are there any? Captain Atom, like the most of his Charlton Comics brethren, is a one of the DCU's red-headed stepchildren. For writers as well as readers, it's been hard to figure out what he's like, let alone where belongs in the DCU. 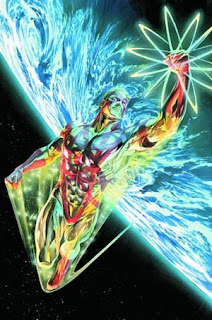 If you want a sense of how far DC was from knowing who these characters were and who they wanted them to be, (re-)read Crisis on Infinite Earths. Could Ted Kord have been a less pleasant hero? "Can the telethon, pal; you got our donation. I'll join your gabfest." Could this person be less like the Ted Kord of the Blue Beetle series, let alone of the one of the JLI?

Captain Atom, on the other hand, was simply damned by faint attention. I read his own series for a while, but still never got a sense of his personality. As far as I could tell he was a Air Force officer but dumber than a grunt and the only sparkle he had was from his skin. He was Hal Jordan without the charm. Or the ceiling tiles.

But I learned to adore him when they sent him on his Grand Tour of the Wildstorm Universe. Out of the shadow of the DCU's mainstay icons, he truly shone (and not just because of his skin) like a beacon in the dark world of Wildstorm. He became more than a superhero for me; he became a hero. He was powerful, righteous, intelligent, resourceful, passionate, and reasonable. Most important, he was a tower of morality.

I was disappointed by the decision, but resigned to it. Because it they went to the trouble of shining up Captain Atom to new heights of herodom, the tale of his fall into universe-threatening villainy would surely be Shakespearean in its pathos.

Or, it could be COMPLETELY FRIGGIN' IGNORED.

Captain Atom goes from being the shining example of heroism in the Wildstorm Universe to a masticator of scenery and master organizer of a multiversal army of worldkillers? Because of....what exactly? Some trouble in Bludhaven? No; no I don't think so.

I want a better explanation, DC.