It's been a while since I last read Spider-Man, so I thought I would catch up on him by reading Spider-Man 550... . 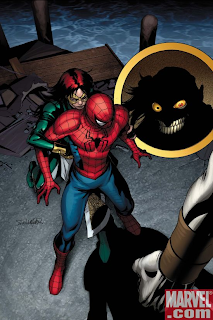 Well, not too much seems to have changed. It's not like they did anything weird or drastic 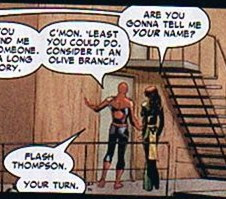 with him, like marry him off , replace him with someone else, or have his secret identity exposed.

He does seem to have graduated from high school, though he still has that bizarre love-hate thing with Flash Thompson, the jock who he either wants to become or to marry.

Only two things seem to have changed, really. First, Peter Parker appears to have had lasik. That's good; I could never figure whether Spider-Man was running around half blind or whether he took his mask to the optometrist and had prescription lenses put in. Second, the old lady hunchback is gone. Maybe she died? You'd think they'd make a story out of that instead of just having her be missing. I guess the Spider-Man editors don't care much about continuity. 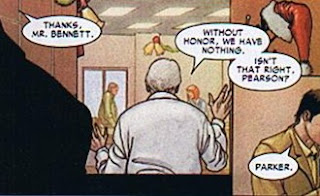 Oh, a third thing: he's got a new boss at the newspaper. That's good; the old guy always seemed like a silly caricature from a long-gone era. This new guy is much more believable and modern. He has high standards for his own business conduct, but they're impersonal. He'll never yell at you or try to cheat you, but neither will he remember your name. Renaming the Daily Bugle the "DB" may seem silly, but it's pretty accurate. I remember when Young Miss became YM and Metro Weekly became MW (and, yeah, I read Young Miss; it's hilarious). As for the new boss, Dex Bennett, it's pretty goofy to make his initials the same as the paper's. Who's gonna name a magazine after themselves? Except, you know, Forbes. Or Oprah. Or Rosie. Okay, never mind that. But, really, it's typical Marvel heavy-handedness; I mean, why couldn't he do something subtler and more realistic, like build a gigantic office building in the shape of his initial?

Okay, so, bizarrely, Spider-Man is stunned that someone doesn't know what the Apollo is, but he has no idea what Lexis/Nexis is. Peter Parker, smart guy, science whiz, works at a fricking newspaper. Who later manages to use an anonymous internet server to send a tip to the police. We're supposed to believe he's never even heard of Lexis/Nexis.

From this I'm guessing that writer Mark Guggenheim is at least 65 years old. I also suspect, based on what seems to be intended as "humor" in much of the book, that he was reared by Catskills circuit comedians. Or maybe he's intentionally writing Spider-Man this way. It's almost as if this Spider-Man were from another time, long ago, like when Joe Quesada and I were just tykes.

"I'm an idiot." Hey, you said it, Spider-Man, not me. Spider-Man is apparently the world's worst detective. When he finds the building plans to the Apollo Theater at the bad guy's hideout, he doesn't even Google it to discover that the Mayoral Debate is being held there that week (sponsored by-- who else? -- his employer, the DB). As if he wouldn't already know that. Batman would know that already. Heck, Woozy Winks would know that already. 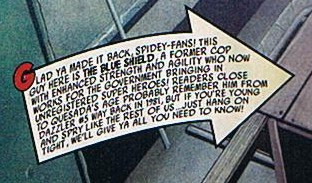 I very much appreciate that it has editor's notes, "Meanwhile" boxes, and the like. But it's really bizarre and annoying that they make metatextual references and directly address the reader. Why, it's almost as if the writers/editors thought comic books were for children!

The surrounding cast? Not so impressive. So there's a redhead female crimefighter who calls Spider-Man "Tiger". Oh, and she's codenamed ... wait for it ... "Jackpot". Uh-huh. More Marvel subtlety. Plus, there's YET STILL ANOTHER ADDITIONAL ONE MORE Goblin knockoff. With the Abstract Noun Codename that's been standard issue at Marvel for 20 or 30 years now. But, really, could it get worse than... Menace?!

"Hey, Mis-ter Wil-son!!!"
It's got some good things going for it, though. A nice, fast pace, accomplished with numerous short scenes. Nice art with great coloring. Seems fairly accessible to the casual reader. It references Dazzler #5; Dazzler references are always worth a few points.
Posted by Scipio at 2:52 PM

Thanks. I needed a good chuckle.

I think that Peter Parker's vision improved as soon as he got his powers, and that he wore the glasses for a few years real time as Peter Parker as a Clark Kent type thing.

Ben Urich, the Daily Bugle's best reporter, once noticed in a story where he almost discovered Spiderman's identity that Peter Parker's vision and courage improved at about the same time.

So I decide to hit the link to your previous Spidey-post and what's the first thing I notice? A comment from ME circa September, 2006! Oh, time...where be you gone?

And, yes, I am enough of a narcissist that the first thing I would notice is my own tiny contribution to the conversation. I am not ashamed.

The Dan Slott issues were much better. Guggenheim is forcing the humor too much, and in the previous issue, it was even worse. Spider-Man singing the tune to the old cartoon show, that sort of thing. And the new boss has messed up the word "Parker" 12 times already. Forced and too self-aware.

After Slott, I thought Hey this is readable and even enjoyable! So say they were still publishing this as three books, I'd read Slott's Amazing and would skip Guggenheim's Spectactular.

After the whole "One More Day" nonsense, I decided to vote with my pocketbook and refused to pick this up.

I think that Peter Parker's vision improved as soon as he got his powers, and that he wore the glasses for a few years real time as Peter Parker as a Clark Kent type thing.

Yup. I think Flash later broke the glasses when he and Peter got into a fight, after which Pete decided to stop wearing them. Can't go around wearing broken glasses, after all!

"It's almost as if this Spider-Man were from another time, long ago, like when Joe Quesada and I were just tykes."

Is it just me or are they sarcastically making the same observation with that "readers close to Quesada's age" swipe?

Yeah, I agree. I thought that it was funny too that this whiz kid Peter Parker had no idea what LexisNexis was even though he could send an anonymous email to a police officer and had the technical no-how to build a spider tracer.

Zoinks! I had to google Lexis Nexis just now and I have an MA. My age is showing. Who says you can't learn anything of value from comic Books

With the Abstract Noun Codename that's been standard issue at Marvel for 20 or 30 years now. But, really, could it get worse than... Menace?!

Valor and Hush do spring to mind...