Like virtually all guys, I love maps. Except for some Gleason work and some of my own abstracts, all the art in my house is maps. Many are of DC, which, as an artificial city, is all about the map.

But, for the most part, the maps I would treasure most ... simply don't exist. Specifically, the maps of the cities of the DCU.

As mentioned many times, I'm a big fan of the fictionopolis. I believe that it;s the most important supporting character any hero can have. Ever read Terminal City? I loved that book, because, really, the city itself isn't just a character, it's the character; all the human characters are part of its details.

Does DC think its readers don't care? Seems impossible. People love to "geek out" on the fullness of their fictional universes. While I wouldn't want a DC version of Marvel's ridiculously detailed tech manuals, I don't think asking for maps of cities we've been reading about for decades is asking too much. For pity's sake, the closest thing I've even seen to an actual map (rather than just a drawing) of Metropolis was this map from the Superman Returns movie. 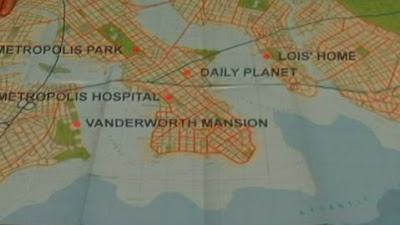 And that map look, ahem, a bit too familiar. Why, I think I could more readily sketch of map of old Krypton than of Metropolis!

Are they afraid having set geography will limit the writers too much? Seems silly. It certainly hasn't held anyone back from writing Batman stories, and Gotham City is rich in maphood, as Chris Roberson has fully noted. Seems to me like having a map of the city in front of you is more likely to inspire stories, than inhibit them.

DC; please do the following.

Make them unique somehow. The creation of Opal City was James Robertson's real achievement in writing Starman; follow his example, and be certain each city is a character not just a place.

Put them on posters and postcards and sell them to us.


Why on earth-one has this not happened yet?!
Posted by Scipio at 8:58 PM

It has. One of the old mayfair games DCU games manuals had detailed maps of Metropolis and Gotham, and others like Star and Coast cities, I think (working from memory). "No Man's Land" in the Batman books had an updating Gotham map that showed who was in control of each region, issue to issue (again from memory)

not a thing of beauty and imagination, but here's a link to central city, as envisioned by mayfair games

There was an excellent map of Gotham City that appeared in Gotham City Secret Files and Origins that came out in 2000 in the aftermath of No Man's Land.

For about five bucks, you can have the "Atlas of the DC Universe: at Amazon.com...

I believe there is a map of Opal City in "Starman Secret Files & Origins".

Speaking of Opal City, was there ever an explanation for why Opal City never had any suburbs?

I do like maps, and I'd kill for one of Opal City, which thanks to James Robinson, is my favorite. I would think that the map to Central City would cover an entire room!

We really need one of Apex City, complete with the best strike zones for the daily meteor showers.

Every five years or so, DC seems to take a stab at giving Metropolis or Gotham City some sort of consistent geography (or at least architecture/design), but it seldom "takes" for long. Such as:

- Gotham City being, with a bit of hoopla, redesigned to fit production designer Anton Furst's 1989 movie look. (Furst might have actually done work specifically for DC on this, IIRC.) Little seems to have stuck from this, though I think Gotham Police Headquarters' look dates from this attempt, and has stayed fairly consistent over the years.

And I wonder if Kurt Busiek's great Metropolis ideas, like the Avenue of Tomorrow, haven for the mavens of Science!, will have any persistence.

I appreciate the replies and accept their spirit. I am familiar with those resources, but they aren't satisfactory.

Something from Mayfair Game isn't something from DC itself. Is the Mayfair map of Central City likely to be used as the template for it when (if?) a Flash film is made, or to be used in a comic book? No, not likely.

The map of Gotham, on the other hand, pretty much stuck from the moment it was introduced in NML.

The Opal City "map" was a 3D drawing of some blocks in downtown; it was mostly about the tone of the city rather than the geography. It was lovely, but more of a tease than a map.

The map of Metropolis in its B13 Phase was interesting. But again, it was a 3D drawing, and Metropolis looked way too small. Plus, the whole island waterfall thing? I can't believe that design of Metropolis is still in continuity (whatever that means, LOL!).

"Kurt Busiek's great Metropolis ideas, like the Avenue of Tomorrow"

Hey, Kurt; I know you're out there!

Can we get you to draw a map of Metropolis? I'll buy an extra copy of one of your comics, if you do!!!

I think James Robinson has said that he and Tony Harris had worked out a map of Opal City at the start of their run, to keep the streets and everything consistent throughout.

I think DC Editorial has bigger problems right now than having consistent geography within the cities now. Although I do wholeheartedly agree with the idea. I'd totally buy those maps.

The map I'd like to see is New Venice, FL from the early-80s Aquaman stories! A half-submerged town! Think of the possibilities! Fast-food restaurants and banks with "Sail-Thru Windows"! Floating island city parks! Street cleaners with pool nets instead of brooms! Pest control services advertising removal of crayfish instead of cockroaches!

They keep *trying* to draw the maps-- but Danny the Street keeps popping up and FUBARing the exercise. Means that the cartographers can't draw the same map two days in a row.

No, that's true. But: I recently took position of the DC RPG sourcebook about the 5YL Legion, and it has numerous details in there that a) were never established in comic books, but b) were later acknowledged by DC as having been proper continuity. So I say that the Mayfair stuff will bear at least some of our weight.

1) The Mayfair game benefitted from extensive input from DC editors and creators. It was a very accurate system by most standards, often referenced at the time.

2) I considered scanning Metropolis from the Atlas for you, but I'm certain it would not be of satisfactory detail. It's lightweight.

3) It would also be nearly twenty years out of date, and Mayfair data as a whole falters by the early 90's.

There was an excellent map of Gotham City

So where did the Metropolis map in the post come from? I've never seen that version.