J'onn, I'm so glad I caught up with you!

The editors of DC Comics are coming; they're coming to kill you! 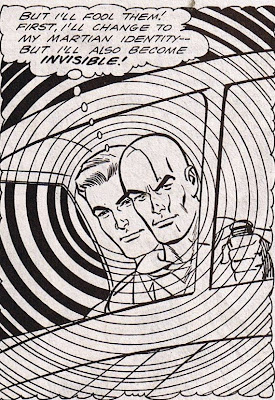 I don't think that's going to help, J'onn. They can still see your thought ballo--errr, ah, I mean they can, um, detect you with their telepathy. Besides they've got unearthly powers of their own, and your own powers are so inconsistent that-- 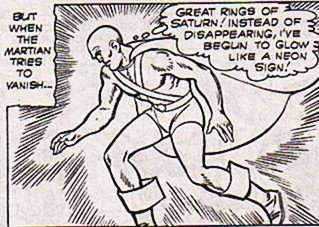 Ooh, I was afraid something like that might happen. I don't think hiding going to work very-- 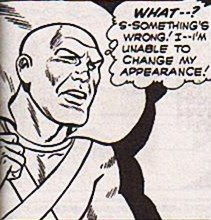 Well, you did, but the Skrull-Gumby look didn't really help, I'm afraid. 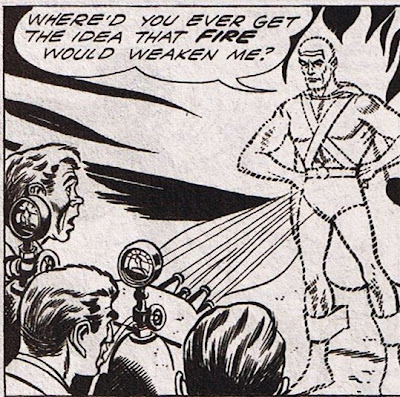 Oh, yes, I know they keep removing your weakness, J'onn. But you should know that only lasts until the next time they use you in story.

Dan Didio, Geoff Johns, and Grant Morrison are going to kill you, believe me. 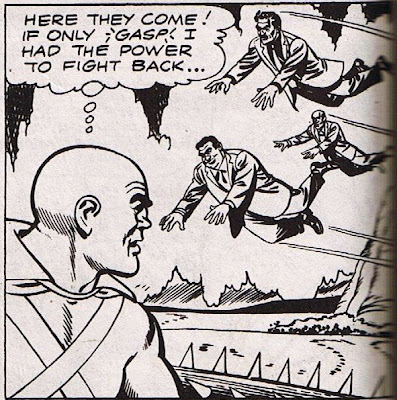 Yeah, it's never enough power, is it, J'onn?

Maybe if you reinvent yourself; you did so well in the comedic antics of the JLI... 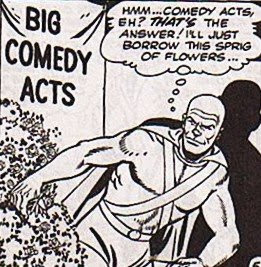 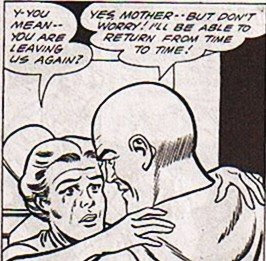 Um, yeah, Mrs. Martian? Don't stay up waiting for that.

Like I've said before, in a League full of Stooges, J'Onn was Vernon Dent.

Totaltoyz is absolutely correct. Given the emphasis on wordplay, however, I would suggest that he is Zeppo to the league's Harpo, Chico, Groucho and (occasionally) Gummo. At the best of JLI, MM had the kind of wounded, crumbling dignity that only the best straight-men (Ted Knight and Jason Bateman come to mind) can project.

Thank god you posted the "comedy" panel after the really scary DiDio/Johns/Morrison one. That one gave me the chills...

You know, his death was anti-climatic for me when I read it. But the last two panels you posted actually made it kind of sad for me...

Ragtime, that picture was probably from when John Jones couldn't access his Martian powers while in human form.

Best Shot: "Dan Didio, Geoff Johns, and Grant Morrison are going to kill you, believe me."

To the reader he does. Transquartomuralistic address is one of the Manhunter's powers.

I have to amdit that the Johns/Didio/Morrison panel just cracks me up every time I reread it. THAT is how I now picture the offices at DC.

Yeah. People flying around in business suits and stiff poses with evil grins; it really is just like that, you know!

J'J' still around or will be in the future; the far, far future.

After all, wasn't he in one of the DC One Million books, done under the auspices of... Grant Morrison?!

I assume that (in some half-assed way-- see the transition from Death of the New Gods to Final Crisis) the end of Salvation Run is supposed to set up Libra's capture of J'onn before killing him. Of course, I don't know why J'onn would survive Luthor setting fire to the whole planet but not the subsequent firey pointy stick, but there you go.

So that means that J'onn's capture in Salvation Run # 5 (?) is what set up his death.

a) I wonder whether we'll see Catwoman feeling guilty about that.

b) That also means that J'onn's apparent inability to remember roughly 2/3 of his powers in that scene is what ended up gettin ghim killed. Invisibility and intangibility are useful defensive skills-- but only if the writers let you use them!