We All Screen for I Screen 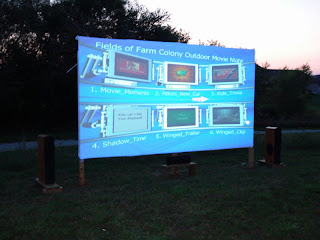 My newest project is making video CDs for Big Monkey. They play like DVDs do, and we'll be showing them on the big flat screen. You can add audio to them, but I prefer them to be silent; otherwise, they would start to drive the staff crazy, like the old "Welcome to Our World of Toys" jingle that used to play non-stop at FAO Schwartz. Gods, I hated that song.

Each disc is to have six "chapters". Each chapter is essentially a slide show between 11 to 15 minutes longer (at the rate of change and with the transition modes I'm using, that's between 30 to 55 slides).

I want to make many of them (at least eight, to start with), so that the same disc isn't playing every hour of every day. Here are some examples of the slide shows I've already composed.

Character Precis
Designed to familiarize neophytes with various characters. There's two slides for each character: one that's a picture or wallpaper shot with a sentence of two about the character, and another that shows various titles and books in which the characters appears. And which you should buy. A lot of.

History of the Golden Age of Comics
Basically, the "Golden Age for Dummies", presented chronologically.

Memorial to a Martian
Lots of (mostly wacky) pictures of the late Martian Manhunter, unannotated.

The Art of Neal Adams
A picture or two of the artist himself, then lots of examples of his work.

The History of the Black Canary
Kind of like the Character Precis, but focusing on one character, showing and explaining the stages of their evolution.

The Senate versus Comic Books
Explaining the Senate hearings, the Comics Code Authority, and how the "Wertham Era" was the transition between the Golden Age and the Silver Age. Lot of work to make, but very educational.

The goal is for the six chapters on any disc to be of different types, for variety's sake. Some light character and content overviews, some deep character profiles, some broad industry history, some creator profiles/galleries, some simple themed galleries of pics. You know; like a mix tape for a party.

Already, I can perceive some "standard" slideshow formats:

The Character History
Particularly useful for focusing people on whose books could use some pumping.

The Themed Gallery
Some simple, like pics of one particular character. Some more topical like "Heroes Getting Hit With Pies". Some combos, like "Hal Jordan Getting Hit in the Head".

Industry History
Having done the Golden Age and the Wertham Era, how can I not do the other ages (Silver, Bronze, Iron, and Platinum)?

Comics Explained
It's so easy to take what we know about comics for granted. Having some of it explained simply would help a lot of newcomers: "Comic Book Terminology"; "The Creator Roles"; "The Anatomy of a Comic Book".

The Character Precis
I think this sort of on-going in-house "Who's Who" project is essential for helping mainstream comics make sense to people.

Genres Explored
All About Western/Sci Fi/Horror/Etc. Comics. A little history but focused toward relationship with other media and What You Can Be Buying Now.

The Quiz
Like they play at the cinema before the film begins.

I have some ideas that particularly tickle me, like the Comics Code Illustrated, clause by clause. "Gallery of Sound Effects". "Villains Screaming". "The Comic Book Family Photo Album".

But I could always use more ideas. If this were at your store, what would you like on the screen? What do you think would be good to edu-tain newcomers to comics?
Posted by Scipio at 6:10 AM

Well now I'm gonna have to drive all the way down to DC to see this.

There's gotta be a "video brochure" from the Apex City, Florida Tourism Board!

These will be available for order via this lovely website...right Scip?

This is such a cool idea! The only way that it could possibly be improved would be a Green Lantern video of course, with Hal either being hit on the head, or posterior shots of all of them.

Maybe you have it already covered in the Character History, but Character Visual History would be cool.
I was looking at the latest version of Hal's costume, and it's interesting how the same basic idea has been tweaked over the decades to make it more contemporary, yet retaining all the basic elements.

"These will be available for order via this lovely website...right Scip?"

Hm. I actually hadn't thought of that.

I know that they cannot be played on all DVD players; for example, I can't play them on mine at home. But they work find on the newer player at the store. That makes me hesitant to sell them.

This is a great idea!

Well I am always partial to a Wonder Woman theme...Braclets and Bullets...the evolution of a princess...and theme of all pictures of her withe her hair blowing around her head :) Oh maybe a theme of pictures called Lasso...each picture has a different villian or person captured within her lasso. :)

Oh and another theme...Nightwing shirtless...but that might be a CD you play after the kiddies are asleep...or maybe I can just play that one in my home...late at night, alone. LOL

But keep Wonder Woman in mind for sure!

I was thinking of a slideshow of all the weird Wonder Woman bondage shots... but then again, the CD only has room for so much data!

"I was thinking of a slideshow of all the weird Wonder Woman bondage shots... but then again, the CD only has room for so much data!"

LOL...Better make it a multi-volume set ;)

Not legal to sell, probably, but giving or trading on a personal basis would likely be "fair use."

That said, how about "Curt Swan and His Inkers"?

Maybe a Recommended Reading of specific trades/GNs.
I think of the many times I've recommended (explained my love for) the Preacher series to a friend and sort of wished I had it all recorded somewhere.

First off, this is an amazing idea. Your store must be so much fun to browse and shop at!

Here's one idea: panels of characters "pushing" themselves (going past that previous level of fatigue to do a feat that normally would be impossible for them). It's perhaps more of a Marvel thing but along with the hyperbolic caption boxes that accompany such panels, it's the essence of superheroic drama.

"You can't contain the action!" -- a montage of characters bursting out of panel borders.

The Many Armors of Iron Man

The Sidekicks, From Aqualad to Woozy Winks

I like the fictional tourism brouchures and the sidekick themes myself. You could also include Resurrected characters (the many deaths of Jean Grey, perhaps)and famous meetings (JFK and Superman, Capt America vs. Nixon, etc)