Punjab the Tailer having explained why CAW attacked the Midway Museum and the whole Talking Head/Solar Lamp schtick, the Hawks use the Absorbascon to determine the location of each.

The Absorbascon is sort of a search engine that plugs directly into your brain, somehow sucking in the collected knowledge of humanity and finding the piece you ask for.  Just like Bing.  But it can be a hassle to sort through it all, particularly for people who spend most of the day hitting people with maces while dressed in animal-themed dominatrix gear.  So basically, despite having a device that can tell or teach them anything, the Hawks use it only when it speeds the plot along.  I would make fun of them more for this were it not for the fact that most of us use the internet in exactly the same spotty way.

The Absorbascon whispers sweet somethings into your era, like an extremely informative Latin lover.


Can you imagine how this makes poor Batman feel? "Just give me FIVE MINUTES with it. This is Batman, BEGGING you."  Think of what a time-saver it could be for the World's Greatest Detective: "Where is the man who killed my parents? Who is the Joker?  What was Killer Moth thinking? And what about...Naomi?!"

I'm sure it only works on superior Thanagarian brains or some such.  If you are wondering why they don't use the Absorbascon to simply ask where the damned lost treasure of the Nine Unknowns is, which is the reason they are looking for the Talking Head to begin with...

well, then, I'm sorry, you are too sensible to read Hawkstories.  Go back to something more logical, like the Martian Manhunter.

Speaking of logical, let's examine the Hawk's choices of weapons as they head off on their separate adventures.  Because every Hawkstory is really about:

All of which makes them perfect foils for CAW, who pretty much have the same M.O.

"I'll take Paris for my beat, while you hightail it to nab those Ratzis at the Dunkirk munitions factory!" Poor Hawkman; still thinks he's in a Justice Society story.


The Thermodetector is a high-tech heat-based magnifying glass formerly known as Prince; the medieval war mace (as opposed to the less popular PEACE maces made by Nerf) has been tricked out with disguised sci-fi tech, which completely spoils the whole point of using ancient weaponry. Hawkgirl demurely picks a delicate lady-like spiked caestus.  And no bra.  Hawkgirl never forgets not to wear a bra.

Hawkman arrives in Paris (right past the Eiffel Tower, because the Hawks are nothing if not showy) to the Montmarte Marche Aux Puces, where he discovers CAW has already beaten him to the Talking Head. It was sitting in a flea market basement as unsellable crap (which without the solar lamp to power it, it pretty much is).  The key thing to note is that CAW could have just bought it for a few francs.  But instead, they stole it.  Because they are not the Buyers Alliance of the World, you know. 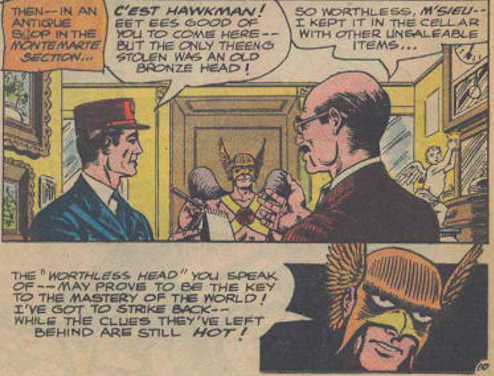 "Strike back while the clue's hot." is an old Thanagarian saying. Weird people. If you hadn't already guessed that from the headgear. 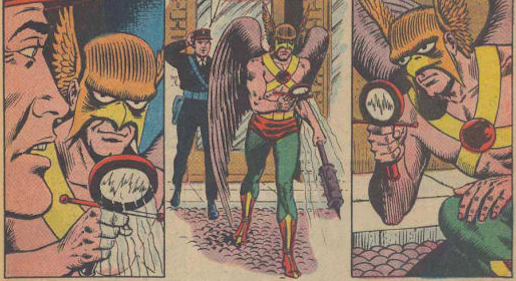 I am sparing you Hawkman's three-panel lecture on how the Thermdetector works, and you are grateful to me for that.

Purely through heat-detectiong, Hawkman catches up with the CAW goons, who, because they are criminalizing in Europe, are driving a convertible, which is pretty much exactly the wrong thing to protect you from a winged flying guy.


Five francs just to buy the damned Talking Head would have fixed this, goons.  And there would have been nothing Hawkman could have done to stop you.  It's very CAW.  Millions for defense, but not one cent for tribute.

What IS it with you, Pikachumobile?


Naturally, the CAW goons have another one-time high-tech hand-held weapon at their literal disposal. 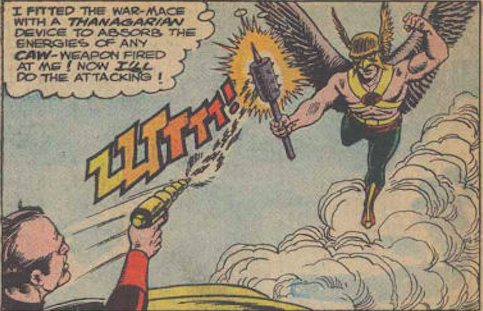 "Fortunately, I keep my feathers numbered for just such an emergency."

But where the sci-fi gun fails, the car top succeeds:

Did I mention before that the Hawks don't do dignity?  Because they don't.


It's kind of a wonder Carter Hall and Hal Jordan didn't hang out together more.  They're both clumsy meat-heads with sci-fi weaponry.  They should form a club.  Then get hit with it. 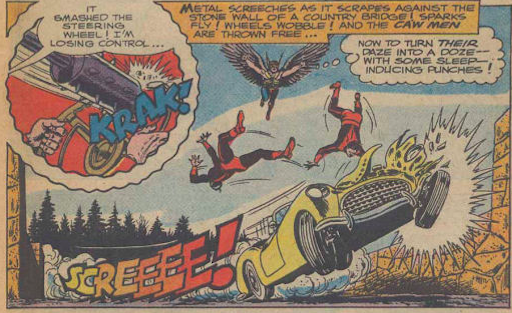 CAW goons, defeated by a blunt object. AND his mace.


Right after Hawkman klonks one of these goons, the other decides to get sassy. VERY sassy.

Gurl, puh-lease.  A rear attack is NOT going to defeat Hawkman, Mr. Whipple. 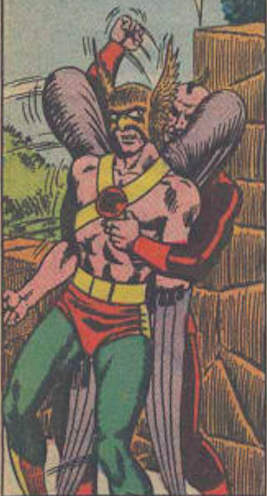 If I had a franc for every time I've seen this sort of scene on the streets of Paris,
I could buy a Talking Head!


The dialog seems to imply that this guy intends to ...throw Hawkman off a bridge?  Not the best plan. 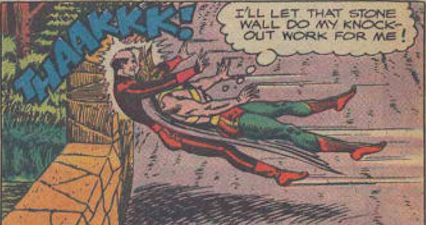 
So, Hawkman, with just a bit of fuss, has recovered the Talking Head.  And then he asks the question we've all been wondering... 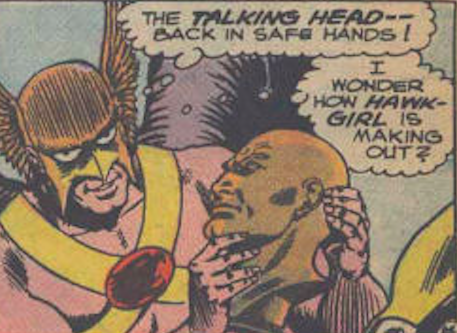 "I wonder how Hawkgirl is making out?"
With the mask still on, Hawkman; no doubt.

Which we will see for ourselves tomorrow.
Posted by Scipio at 5:47 PM

All right, I have to call fraud. An ancient Indian bronze head featured in an old Pulp serial has got to be way more sellable than--just examples, mind you--the naked cherub changing a light bulb or the painting of the Watchmen's Nite-Owl punching Mr. T produced twenty years before either was in the public eye. C'mon, what kind of crap operation do antiquers run in Montemarte...?

Also...did Hawkman delay arriving at the shop so that the CAW MEN (that's what the caption calls'em...) would steal the head and he could steal it from them (getting clocked by a fabric convertible top in the process, or course) instead of buying it? I bet he's going to tell the Indian government (and Talbot Mundy), "if you say yes to one you suddenly find the British--err, Midway--Museum would be empty. I am afraid to say, it is going to have to stay put," too.

The Thanagarian Hawkman was never a member of the Justice Society. >TWEET< Five yards. ;-)

I wonder if the golden age Hawkman (and Hawkgirl) had even weirder adventures than the silver age versions. It's arguable that the Justice Society did. I guess. Sort of.

cybrid; I know; that was my point.

Heh. It's been nagging me as to where the line came from, but now that you mention it, the Hawks are almost tailor-made for PBS, aren't they? An obsessive, but...let's say "selective" drive to educate the reader, big words that are barely relevant to the plot, brilliant omniscience (with a magic education box!) that has no effect on the plot, and a weird inability to grasp even the broad strokes of the human world. Hawkey Super-Stories could've been a spectacular book...

We all know why Hawkwoman chose to go to Bangkok. After all, the Hawks probably have a hotel suite permanently reserved there.

"t's been nagging me as to where the line came from"

I assume you are referring to "And what about...Naomi?"

It's from Electric Company's "Love of Chair"...

Yes, I noticed your remark about a rear attack. I suppose that either the (Hall Jordan) Green Lantern or the Elongated Man should have been a guest star here.

I do, in fact, miss the happily married couple, Hawkman and Hawkwoman. In fact, I miss both the golden age and silver age versions. Everything else following this has seemed to be needless and unpleasant.

I really don't know why Hackman even bothers with that silly mace, since he does seem to be enthralled with the Hal Jordan method of just banging things with his head.

Scipio, I probably should have phrased that as "It had been nagging me..." That's where I started thinking about PBS and the old Spidey Super-Stories series that, if you haven't read, imagine a series that (intentionally) makes Hawkman look like high drama, like having Thanos laugh at our hero as he gets into his self-branded helicopter. Great stuff.

3) There's also a bow and quiver on the Wall of Armaments which would give them ranged attack. Which OF COURSE they ignore. $10 says they don't want to be confused with the Emerald Archer who is also known for fancy masks and bizarre sexy-times.

5) "The foot-trail ends here! They must have left by car!" Says a flying man going up against an organization named CAW with future-sci-fi weapons. Absolutely no way they had any aviation means at their disposal. Nope. Has to be a car.

5) The car is a yellow Morgan. Between this and the Fancy Red Flechette Loafers (FRFL), I may just join CAW myself.

6) Hawkman uses the mace to stop the car, then uses the bridge to stop CAW. Yup, that's 100% Hawks right there.

You KNOW WHAT KIND OF CAR IT IS?

No matter how long and well I know you...you are still so weird.

Which makes me want to join CAW even MORE.