The Only Pic You Need Today 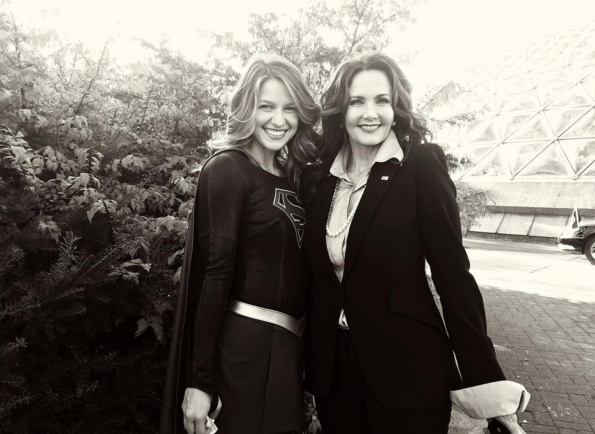 Sexist alert:  (super-)women are the shining light of hope for what superheroes SHOULD be in popular media.  Powerful but sympathetic moral exemplars.

Lynda Carter nailed this perfectly, utterly, and forever as Wonder Woman in her 1970s show.  Wonder Woman was no-nonsense, but never mean.  She was always ready to help reform and not merely punish.  Wonder Woman didn't get angry at you for being a bad guy; she was disappointed in you.  Just as your mother would be.

Melissa Benoitte has brought a similar quality to Supergirl and it's been a welcome lamplight in the otherwise dark and gritty landscape of live-action superheroism in the modern era.

Is that sexism, because we want 'girls' to be sugar & spice?  Is it just realism, because women tend to embrace situational ethics while men hew toward rule-based utilitarianism?  Is is just men taking men-heroes too seriously, just as they do themselves?  When did being an actual good guy start to seem too weak for people?

And lo, all is right with the world once more....

I've been watching old WW reruns of late, and it's not just the jiggly eye-candy I thought it was when I was ten. Sure, there are things I don't like about the gender dynamic of the show, but Wonder Woman does what is almost unheard-of these days: she talks to villains, she tries to comfort them when they're motivated by pain, she offers them a chance to surrender. That's how both male and female superheroes should be.

So yeah, I'm damn pleased that "Supergirl" gets it. I've officially switched in my head: Supergirl is the real deal, Superman is the inferior knockoff character. That's how good the "Supergirl" show is at getting it.

For modern audiences who can't imagine male heroes talking first and punching later, I will direct you to the "Fargo" TV series (especially season two). Now imagine superheroes behaving that way. It can be made to work.

I see "dark and gritty" as more of an absence of fun than the presence of anything. Which would explain why things that aim for it rarely hit anything.

Based on our culture's entertainment these days, ONLY women are heroes... men are now either villains or buffoons (or heroes in spite of themselves). Been evolving that direction since the days of Roseanne and Married With Children.

Star Wars is "ate up" with that thinking. Poe Dameron was the only new straight-up male hero in TFA. Can't say for sure about Rogue One, but it too is pushing the "BA" chick for the lead.

Back to the OP, I'd be more concerned if males DIDN'T see female characters in that "sexist" way, meaning "as females." The day males don't look at females and think of their hard-wired destiny of mating will be the day we all become nothing more than robots for the economic machine. Doesn't mean we should be rude about it, but still. It's an absurd discussion that says males are wrong for thinking about it.

"The day males don't look at females and think of their hard-wired destiny of mating will be"....

every day, for quite of few of us Mr P.

Also, you seem to be conflated 'sexist" with 'sexual". If so, I'm guessing you get in trouble A LOT.

I think it's sexist, only because I believe that this is also how the male superheroes should be acting, on average. If I am capable of stopping people from doing stupid things without punching them (and I am), then I don't think it's too much to expect the same from Superman.

And I'm also pleased that the Supergirl writers were able to make the opposite point, as well, that there's nothing wrong with a woman getting angry about whatever she's dealing with and that lashing out is occasionally a good tactical move.

I definitely need to rewatch the old Wonder Woman series, though. I haven't seen it since I was a kid and didn't give it a solid chance.