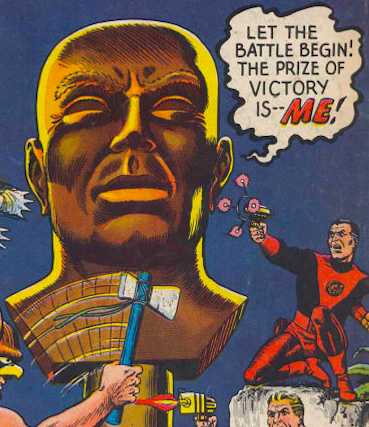 "Mr. Trump does not wish to see the bust until AFTER the hair has been affixed, thank you."


It begins with everyone's favorite swingers, The Halls, returning from another one of their wild, ribald escapades. 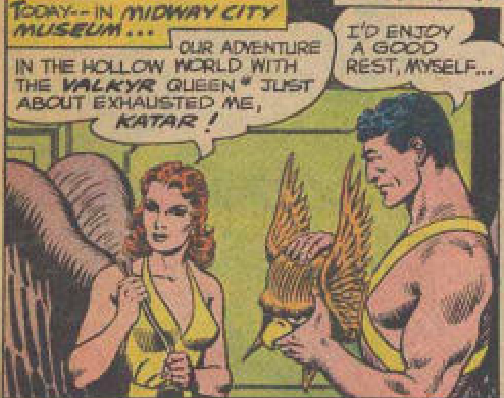 Oh, those queens and their 'hollow worlds'.  The less said about that 'adventure', the better, Shiera.


Actually that's a lie.  It begins, like most Hawkman stories, with exposition. Lots of lots of it.  Like, World Fair's levels.

Find the Head. Find the Lamp. Save the Cheerleader.
It's always SOMETHING, isn't it?

Note that the opener mentions one my personal faves from the later Silver Age: the Criminal Alliance of the World, a.k.a. "CAW".  Unlike many such groups, "CAW" does have a perfectly reasonable acronym. It's nice and businesslike, and doesn't stink of strain (like, say, the Organization for General Revenge and Enslavement or the Hierarchy for International Vengeance and Extermination, both of which miss badly the personal nature of revenge/vengeance and the ungeneralizability of the concept of enslavement/extermination).

But despite C.A.W. being a reasonable acronym, let it not be overlooked that having the Hawks fight an organization named "CAW" is hilariously onomatopoetic.  It's like having Batman fight S.K.R. E.E.. or Flash fight Z.I.P. or Hal Jordan fight K.L.O.N.K. 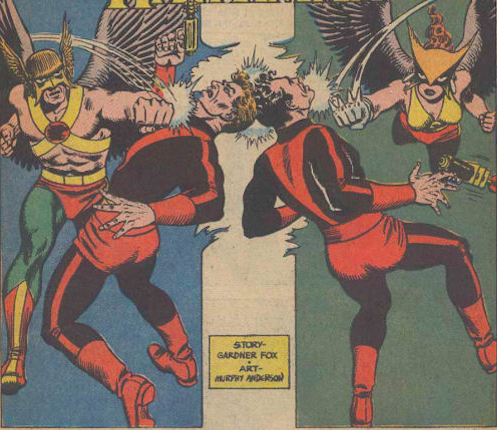 C.A.W. goons had matching jumpsuits, a love of visual symmetry,
and enjoyed breaking the fourth wall.


The story also features a bronze ancient mechanical oracle in the shape of a man's head and a light bulb from the Freeman Dyson Collection.  It's like what you'd get if Apple put Salvador Dali in charge of product development. 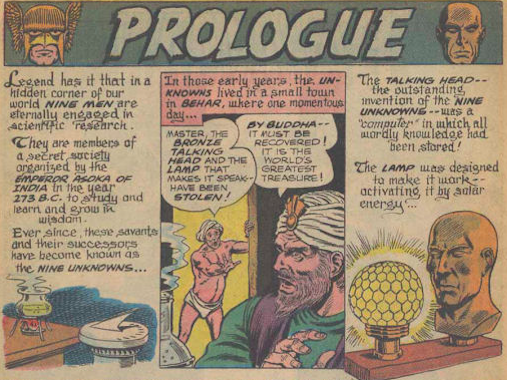 Because nothing says "scientific research" like Olde Tyme Phonts.


Since name-checking noted killjoy Asoka the Sorrowless wasn't nearly historicalicky enough for a Hawkman story, the endless exposition also brings in noted geek and armillary aficianado, Pope Silvester, Junior (because a Bronze Talking Head is really the kind of thing he'd go for). 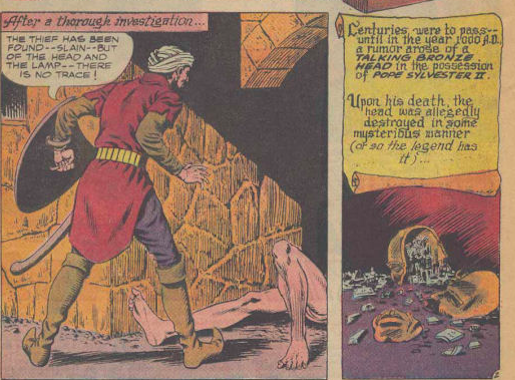 Oh, and a naked guy in an alley who probably partied with the Hawks the night before.

What on earth could all this have to do our favorite Flying Furries?  We'll find out tomorrow.

"Find the head! Find the lamp! And when you do--you die!"

Sounds to me like all the Hawks need to do is just sit back and let the Head-Lamp do their dirty work for them.

Also, like an approaching storm, I can already sense the bad jokes lingering on the horizon....

In William Gibson's seminal cyberpunk novel "Neuromancer" the Maguffin was a jeweled sculpted head that turned out to be a remote link terminal to an AI. Who knew he was a Hawkman fan?

Hal fighting K.L.O.N.K. sounds so natural, like something that really happened in the Silver Age. We had better be careful with it or people will think it's real and it will soon be all over the Internet was a real fictional organization that menaced Green Lantern on a regular basis (i.e. three times) in the Silver Age.

Soon it will be over the InterWebs. And people will think it is real. And Grant Morrison (or James Robinson) will be hailed as a meta-genius for reviving K.L.O.N.K. in the modern world when nobody else was brave enough.

Ah yes, K.L.O.N.K., aka the Killer Lanterns of New Korugar, who totally existed.

"Killer Lanterns of New Korugar, who totally existed."
Yeah, but their second album was a terrible disappointment!

I'm pretty sure they used to sell that lamp at Spencers, next to the infinity mirrors, wave gizmos, and lava lamps.

I love how "the head was allegedly destroyed in some mysterious manner," when it looks like it just got knocked off a coffee table.

Incidentally, The Nine Unknown was a 1923 serial in Adventure magazine, by Talbot Mundy, and no matter how many times DC uses it as background for their stories (like Seven Soldiers, I believe), it ain't their's. And yes, that does mean that the the story begins with not just exposition, but a book report!