Talking Head Week #3: Have a Nice Trip See You After the Fall!

When last we left her, Hawgirl was, as the Hawks are wont to do, flying headlong to meet an onrushing doom.  This time, it's at the hands--well, the feet, actually-- of a goon from CAW (the Criminal Alliance of the World). 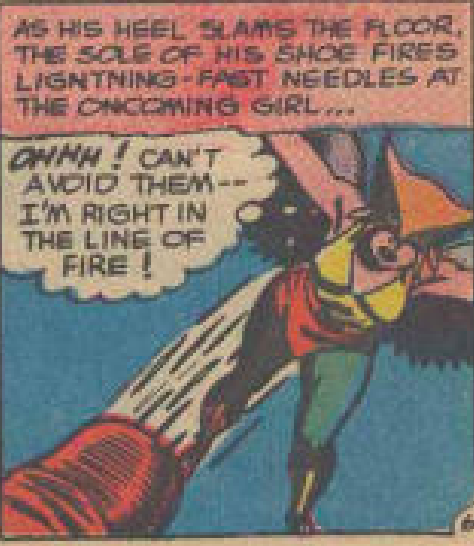 Shoe-shopping with CAW:
"Well, yes, the red is stylish, and the death-needle fusillade is a great feature, but are they comfortable?"

Of course you can't avoid them, woman. Because, as always, you are literally flying headlong into death. Stupid Hawks.

What ingenious method does our extraterrestrial lawwoman use to save herself from this deadly (really?) attack?

The Hawks are about many things: sci-fi, archaeology, kink.  But they are not about dignity.


Actually, in all fairness, she doesn't trip. She IS tripped.  By none other than Punjab the Tailer, who, having her best interests at heart, trips her as a way of changing her pitch down, just beneath the flying feet-needles of doom.

Convenient. A bit embarrassing, though.  Still, even ignominiously splayed face down on the floor....she's still Hawkgirl. 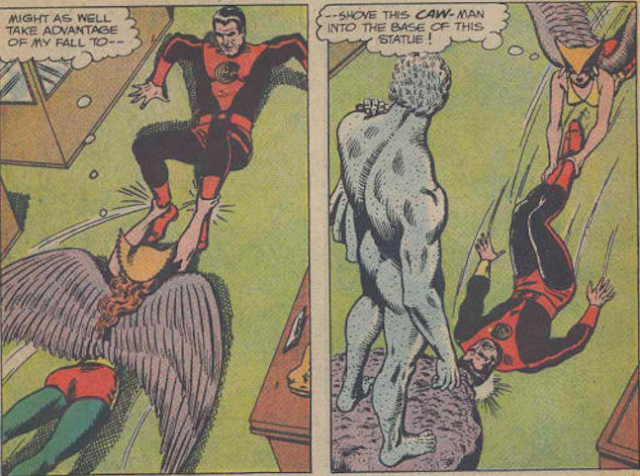 And, thus, she still kicks ass.

Gotta love the Hawks.  Sure, you can come at them with weapons that would make the Romulan Star Empire envious.  But, once those have failed, they will not hesitate for one second to crack your braincase open on the closest rock. 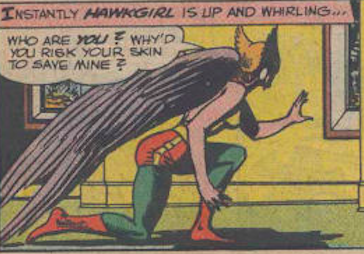 
So, Sargon-lite explains everything about himself and why he tailing the Hawks. Without mentioning his name.  Because that would take up precious exposition space. 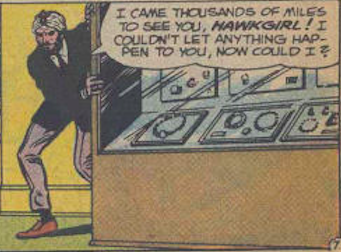 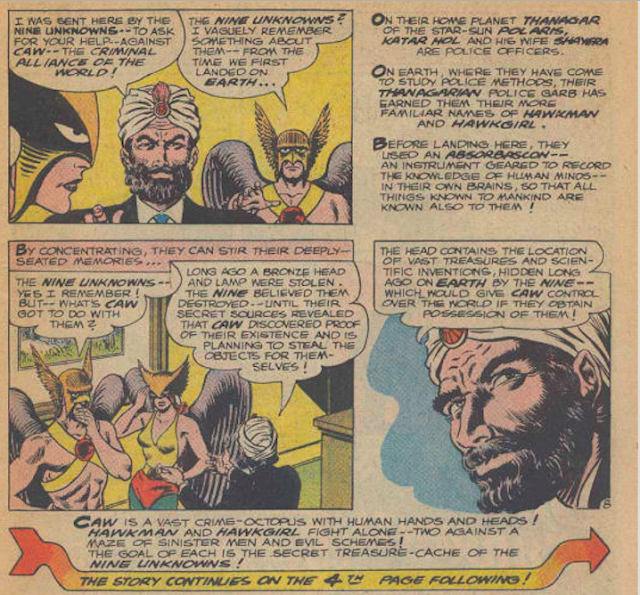 The Absorbascon? What kind of stupid name is that?


So the Nine Unknowns (we don't ever meet them by the week, they are the MacGuffin Clan) have been pumping out scientific marvels for over 2000 years, including ones that (somehow) told them who and what the Hawks were.

These are same people, I remind you, who simply forgot where their hidden treasure-trove is once they put the info into the Bronze Talking Head.  And they lost the Head.  And never built another one, or the Solar Lamp that powers it.  I guess some people just like to publish papers. 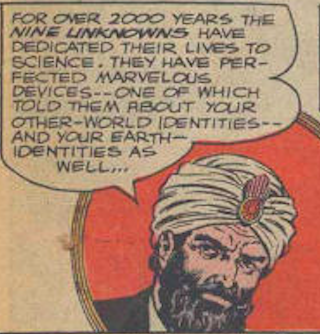 At first I thought it was a rubied turban. Now, given the brain damage all that exposition must be doing to his head, I suspect its actually a bandage and scab. 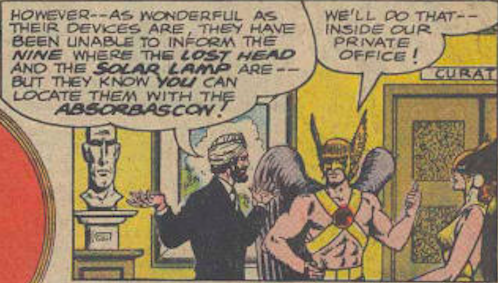 Remember: there is very little the Absorbascon cannot tell you, when used properly.


Tomorrow: see the Absorbascon IN ACTION!

We must be missing part of the Silver Age Hawkman's origin where he worked as a corporate drone for years, because he's way too excited about having a private office. Like, "hey, I've got to go grocery shopping in my Porsche, does anybody want anything?" kind of excited. He's completely ignoring the bronze head story and the semi-conscious criminals interested in his secret identity strewn about, not to mention the stalker fanboy.

And Hawkgirl is, indeed, impressive, if she can be tripped in the air and fall in an entirely different direction in a few feet!

I think you have a point with Silver Age Hawkman and his private office. And that costume, it's like he's saying, "for me, EVERY day is Casual Friday!"

Hawkgirl's not wearing a bra, I can tell you that. Good thing she's an alien, I guess.

I need to see a vast crime octopus with human heads and hands. Because that is WAY too awesome to be purely metaphorical,

It's a lot more fun than any other version of the Hawks I've seen. Maybe it's because the other Hawks are all about past lives, the wonder of flight (which is not much of a wonder in comics), and relationship issues. These Hawks are more like MacMillan and Wife, and their wings are primarily a plot device to get them into more fistfights faster.

And the IQ Gang! Can't forget them!

1) Hawkgirl flying headlong into death is tripped and falls face-first on the ground? That's...not how physics works on Earth.

3) In keeping with all CAW weaponry, there's enough time from when the agent fires the Fnacy Red Flechette Loafer (FRFL) that Hawkgirl can A) see the darts coming, B) think about her mortality, C) get tripped D) fall, E) think of a funny quip.

4) 45 minutes of exposition, yet neither of the CAW agents are tied up?

5) "CAW is a vast crime-octopus with human hands and heads." Not only is "Crime Octopus" the name of our next quartet, but I have a feeling The Octopus might take issue with that comparison. Or does he run it? Now THERE'S a crossover one-shot I'd read!

Good gravy, they just don't write them like they used to!