When last we left


Mr Weems has more than one means of unusual crime-fighting instrumentality as his disposal, thanks to his R&D director, Mr Lee, and he intends to use them.

And his next target; the insidious BIFF HIGGINS!

You know, I could spend a long time trying to come up with a less sinister or threatening name than "Biff Higgins" and still fail.  Who's his moll? Muffy Peterson?

Biff Higgins doesn't sound like a shadowy criminal lieutenant.  He sounds like some sort of chino-draped J.Crew model who spends all his time hanging out on his personal yacht.

What a shock. Biff Higgins, hanging out on his personal yacht.  Who will net this (allegedly) criminal fish? Why, the crew of the S.S. Apex City Chamber of Commerce Vigilante Committee, under the command of Captain Chairman Weems!

Wow, snagged, Biff's really flying through the air!  Uh-oh.  That's not good. That's an unauthorized incursion in the restricted air space of Apex City, which is the sole domain of... the Martian Manhunter.

I like to imagine J'onn just swimming around off the coast for 24 hours waiting for some vigilante-based action.  Anyway, instead of interfering directly using one of his powers, JJ does one of his 'domino routines'... 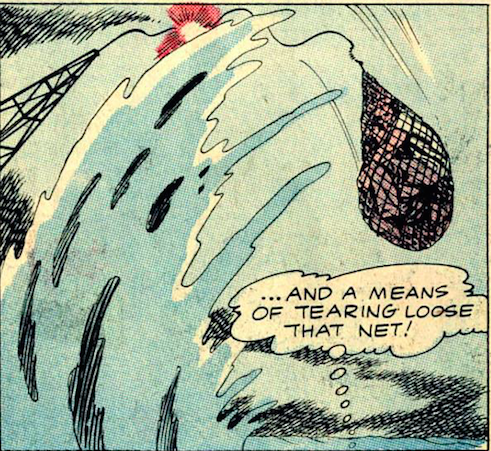 
Weems and his Vigilante Committee lost Higgins, but there are lots of good fish in the sea.  One jangle later, they get a great tip as to where they can find the big crime boss himself!

Several things here to note.  First,  "Fangs" Frazer is not currently indicted or warranted. He doesn't need a 'hideout'; he's a free man, just like Yacht Guy and Yellow Convertible Guy.  That's precisely what makes the vigilantes...vigilantes. Second, is it intentional comic book irony that the hoodlums all look like respectable citizens and the vigilante businessmen all look like hoodlums? Third, everywhere in Apex has a specific location.  If you read Batman, Superman, etc., stories of this period, you seldom read any addresses. Hero-man just says "I've located their hideout" or "I know where they'll strike next; at the Diamond Exchange".  In Apex City, everything gets named and google-mapped.

So, armed with this unquestionably reliably information from an anonymous informant, the Vigilante Committee enacts its plan to get the Martian Manhunter, an alien detective with 13 senses, off their back by having Weems' chauffeur drive a limo filled with dummies of them elsewhere for him to follow.  What could possibly go wrong?

"Fangs" Frazer,  however, is no stranger to comic book irony. He, of course, is the one he gave them the anonymous tip so as to lure them into a trap!

And with J'onn miles away following a car full of dummies!


Fortunately for the Vigilante Committee, J'onn evaded their ruse by using the one power no one would expect him to use:


Sadly, it turns out to be just another power that J'onn uses only once, forgets about and then never uses again!

"Fellow vigilantes, let's rush into the hidden lair of known gangster, Fangs Frazer, and arrest him, compelling him to obey with our strongly worded declarations."

What could go wrong?

Again, if they had only thought to wear thematic uniforms, they could've spun off into their own series instead of getting taught a valuable lesson by (alleged) criminals out vigilante-ing them and possibly out-rich guy-ing them, since "across the street from the harbor" is traditionally pretty ritzy for "a hideout."

And that's probably aggravated pestering, what with the property damage and blue-suit, I think, wearing a monocle. Add in the multiple counts, and I think Fangs is probably on the level.

Hey, is Weems based on a celebrity? He looks absurdly familiar to me. I want to say he looks like a fat Andy Griffith, but that doesn't fit the "what hath God wrought" expression, which is clearly the same model.

I'm assuming 5 life-like dummies were another "unique weapon" the committee commissioned. But if you can build an H-34 that can lift a giant iron hook AND a 5000 lbs Buick, as well as build a boat with the most accurate fishing net firing mechanism ever created, wouldn't you think to add some weight to your dummies?

Then again, JJ would have still realized [key clue] using his [one-time-use-power] and [not-flown] to save the day anyway.

Reading this entry made me wonder: how has there never been a Justice League of America #1 homage cover with HeroClix instead of chess?!

Well...it already looks exactly like heroclix to me (except for the black and white board).

Apex City looks like such a wonderful place to live! So much going on!

And by that, I mean, it is full of very strange people. Sorry, got a bit confused over my posting. I'm incoherent today.

Apex City is exciting. There's always something tumbling from the sky. It's like high-stakes, cosmic Whack-a-Mole.

That's ALLEGED hoodlums, J'onn. Ironically, Fangs and company might be able to reasonably argue that they drew their guns in self-defense. A pack of upstart proto-Limbaughs who've already committed two kidnappings bursts into one's house, who's NOT going to draw a gun? That scene reminds me of a "Doonesbury" strip in which Duke almost shot an NRA guy.

Maybe, aside from his basic "consistent" power set, J'onn can only use a brand-new ability that he just thought up only once, which is why he has to keep thinking up new ones. "Okay, now, how can I do exactly what I did last week in a completely different way?"

"You know, I could spend a long time trying to come up with a less sinister or threatening name than "Biff Higgins""

I was originally going to make a "Mr. Huh-Wiggins!" joke but The Carol Burnett Show was a long time ago...

Actually, that's covered in some panels I didn't include. Fangs admitted that he himself made the call luring them there. Plus, they vigilantes are unarmed and they shot at them. J'onn had them arrested for attempted murder.

"Fangs admitted that he himself made the call luring them there."

Depending on who he admitted it TO, though, it might be count as hearsay.

"Plus, the vigilantes are unarmed"

Fangs and pals had no way to know that. What kind of idiots burst into people's houses making threats without having enough sense to bring guns? Reasonable belief that bodily harm is imminent equals justification for self defense.

Then again, the judge might rule that it should have been self evident that the CVC members were that kind of idiots.

"A pack of upstart proto-Limbaughs" is my new favorite phrase.

"if you can build an H-34 that can lift a giant iron hook AND a 5000 lbs Buick, as well as build a boat with the most accurate fishing net firing mechanism ever created"

You don't think those guys built that stuff *themselves*, do you? Who do you think they are, Killer Moth? ;-)

Obviously, they picked it up cheap by cruising police auctions in Gotham City. Sure, Batman and Robin catch the super-villains, but dealing with said villains' accessories is the police's problem, and sooner or later, every police dept's evidence garage needs clearing out...