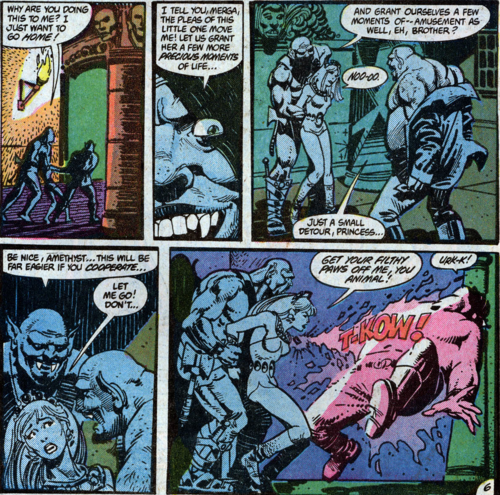 Thank you so much. This is precisely my problem with this clumsy attempt at a reboot. It takes away the core and timeless concept and erodes it to generic who-careisms.

Gone is the sturdy upbringing of Herb and Marion Winston. Gone is solving magic faerie kingdom problems with High School math and science and her mother's psychology. Gone is Taffy, dog of two worlds. No other reboot has this much hand waving at what made the character good and interesting.

My wife is also ticked about the age-change. The adolescent/adult jump made her a very interesting character, quite a jump from the John Carter types who are fundamentally unchanged when they reach a new world. But at least this version is better than the Flashpoint version, who lasted one issue before being murdered.

Also, Amethyst's original run (or the first issues of it, anyway) are being reprinted in a TPD due for release in a couple of weeks. Look it up on Amazon.

My husband, Nathan Hall, already commented on this, but I just wanted to say that you nailed my argument against the Amythest age change perfectly! That tension of being thrust into adulthood before she was ready is what I identified with as a kid who had a dusfunctional family! This was the most interesting point about Amythest, her coping with responsibilities she didn't ask for and her solid upbringing leading her to not back down from the challenge despite it being grossly unfair. I still have the entire series with the exception of two. (still on the look out). While I'm thrilled Amythyst is getting a resurrection, the changes projected aren't making this old fan happy.

My God, you weren't lying about the Chicago Spanking Review...

I liked it as much as I recall loving the original. I definitely like Lopresti's art ten times more than the first maxi. Colon, wasn't it? I never understood his getting work. It's just a different kind of fantasy cliche being used this time and Marx has written the hell out of that zero issue. Beowulf is wasted space but if it forces Marx to avoid decompression that'll be good enough for me!

Hey, I just noticed something:

And grant ourselves a
few moments of - amusement
As well, eh, brother?