When we last left Al Michaels, now known (at least to himself) as The Octopus, leader of the not-particularly-dreaded Octopus Gang, he had let his pet Octavus choose their next crime by means of the famous Octo-Alphabet Board. 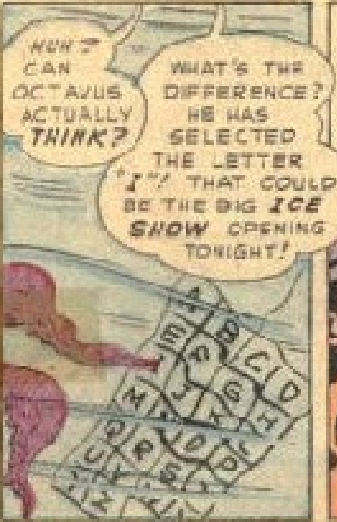 "What's the difference?" is pretty much the motto of the Green Arrow Creative Team.

An eight-themed crime?  At an ice rink? 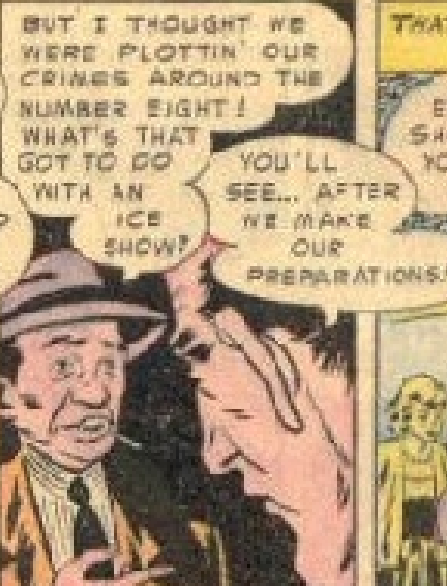 Why, I can't figure that at all!  I simply can't see any possible connection that would link ice skating with eights.  Can you, kids at home?

In case you didn't know it, ice shows are just oozing with Fabulous Gems (tm).

The list of Star City celebrities includes:
that Couple Batman Rescued from a Mugger When They Visited Gotham City,
the Sailor Who Saw Aquaman Once from a Distance,
Kay Daye's second cousin, and
that trampy gal who once slept with Basil Karlo. 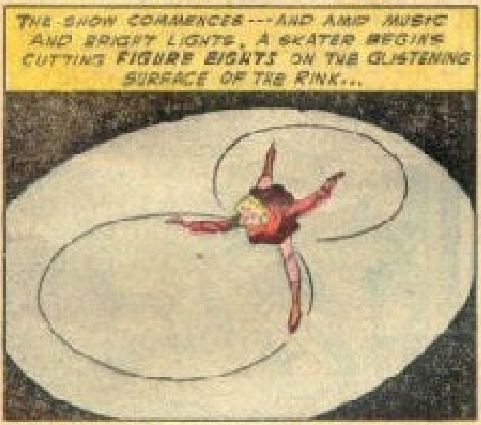 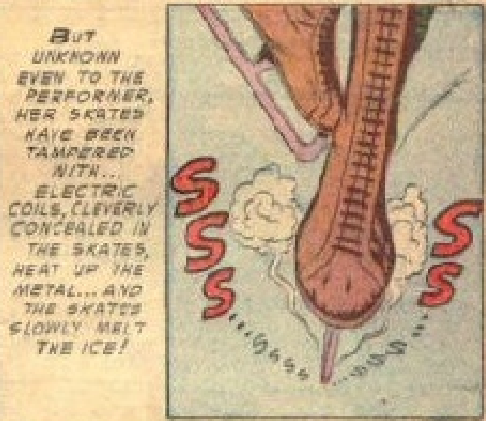 Okay, now I've seen everything.  Apparently, the Octopus's "preparations" involved inventing, in one afternoon, remote-controlled micro-heat coils, complete with power source, strong enough to melt ice that's thick enough to have an ice show on, and then somehow building them into the skates of the one skater you have somehow identified as the one who's going to skate a figure eight that night.

Michaels! Ditch the half-assed thematic criminal career and send an application in to DARPA.  Do you have any idea how much damage we could do with that kind of techno-tactical talent during our next war with Norway?  I bet they'd even let you wear your costume; that's what warrant commissions  are for.

Not pictured below: hilarious falling through the floor by the skater.  "I thought you said you were going to scare the Ice Princess?" "She looked pretty scared to me!" 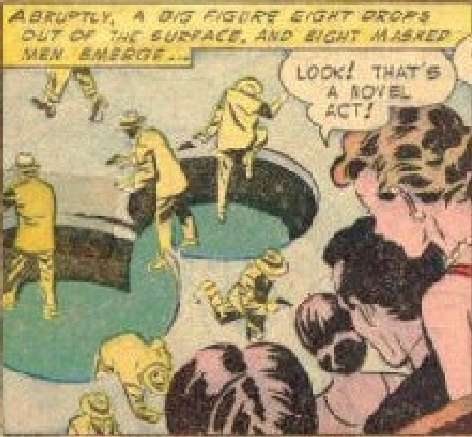 "Abruptly"?  How 'abruptly' can eight guys in suits and hats craw out of a hole in the ice?

Did you know that the ice at an ice show isn't on a floor?  It's a big sheet of ice hanging over, say, a tunnel or crawlspace or something?  You learn something new every day in Star City, folks.

Another thing I learned: the Celebrities of Star City are total morons who think armed men with hats are part of the show.  What do you think this is, "The Untouchables On Ice"? 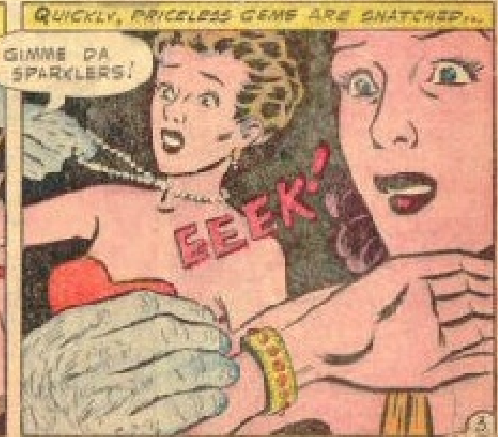 "These Halloween costume Bizarro-hands will hide our fingerprints!"
"Haw! Yer a genius, boss!'

Unfortunately for the Octopus Gang, among the moronic Star City celebrities in attendance is Oliver Queen and His Pet Kid from the Reservation... AND their boomerang arrow. 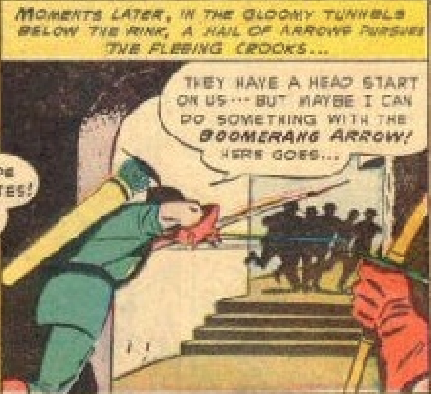 I can just picture the GA Creative Team breakfast meeting in 1953 where they came up with this, all wearing their Mad Men outfits, holding cigarettes and martinis.

I'm just being silly, of course.  We all know that, even if "GA Creative Team" weren't an oxymoron, they certainly never had meetings. 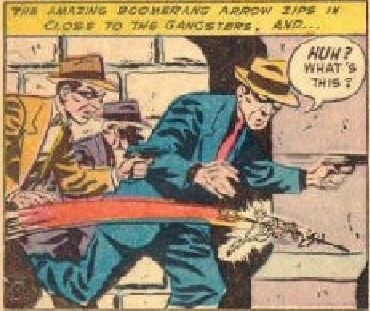 "Damn! Can't stop to shoot Green Arrow and get the jewels back;
gotta have these masks back to the Beagle Boys by ten o'clock!"

What's this, you ask, my criminal friend?  It's a total defiance of physics, let alone the very concept of "arrow", as in "straight as an arrow",  "the arrow of time", "I shot an arrow into the air", etc.  No wonder the crooks are surprised. 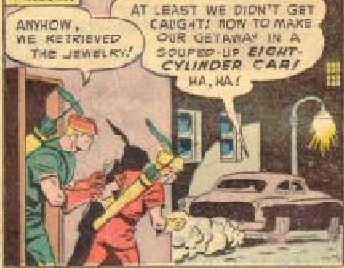 "Gosh, GA! If only we had some way of piercing their tires from a distance!"
"Yes, Roy, it's a pity.  We'll work on coming up with something back at the Arrowcave, right after we're done perfecting the hoola-hoop arrow."

Well, they flopped in this round's robbery, but at least they put on a good show.  Hey, audience,  should the gang give up this no-profit life of crime and become improvisational comedians or performance artists? Or should they ...

RETURN TO THE OCTO-ALPHABET BOARD! 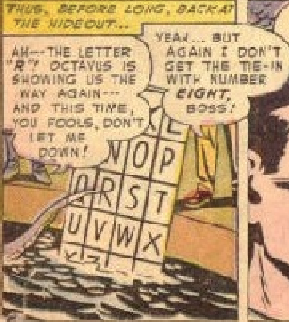 Wouldn't it be something if Ann Nocenti brought THIS guy back?

Although, really, it might be more interesting to get a closer look at the personalities of the eight guys who were loyal enough to stick with Michaels throughout all this. Maybe it's an extreme example of the "attach oneself to a super-villain" syndrome I theorized about during Giant Penny Week.

To be fair, audiences tend to buy whatever you present them with. I remember more than one mishap from my theatre days that the house totally thought was part of the show--including a girl falling from a broken swing and getting injured.

A Boomerang Arrow, eh? Not quite as fabulous as Ollie's Pearl-Vacuming Arrow, or Roy's Dead-Cat Arrow, but still...not bad.

But the planning session was spot on!