Octopus Week #5: The Octopus goes for some booty

Poor Ollie! It appears he's going to have to drag his butt off the sofa and go hunt for these eight-themed losers, the Octopus Gang.  Really, he's thinking, I've done the brainwork of deducing their crime pattern? MUST I go hunt them down, TOO?  Prowling; how tedious. 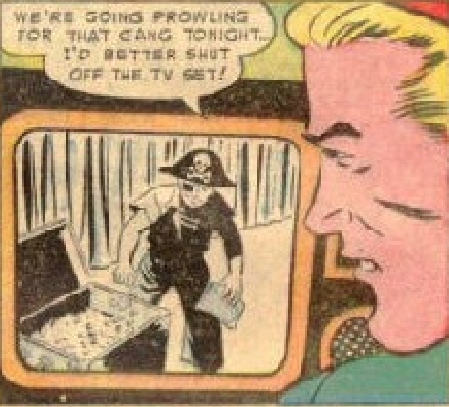 Sorry, Ollie; that's the way crimefighting works.  You can't find the crooks by just sitting your ass on the divan watching the television. 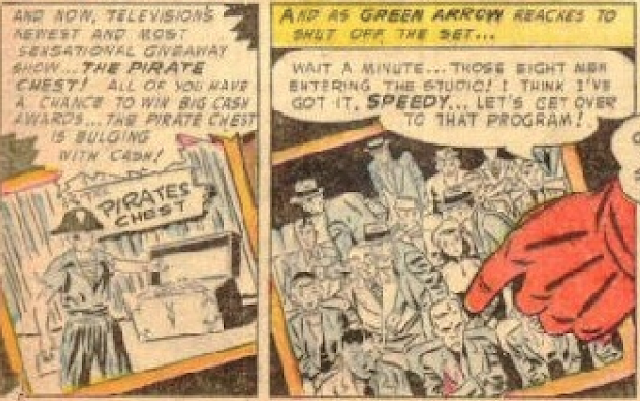 Unless, of course, you live in Star City.

Yes, the Octopus Gang, so careful to wear their Beagle Boys masks at their first, ill-fated ice show caper, have been emboldened by their recent wave of successful crimes (i.e., two of them) to such a degree that they decide to put a job in their street clothes on live television. 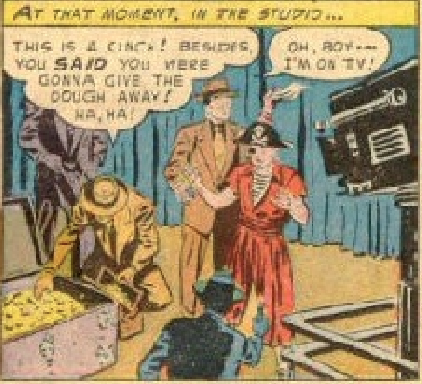 "Oh boy-- I'm on TV! I'll be able to watch this on DCUTube everyday for the rest of life in prison!"

Even Ollie can't pretend he doesn't know the Octopus is robbing the gameshow; I mean, the Kid in the Red Pajamas was standing right there when they came on the TV. Sigh!  Better get to the Arrowcar and down to the studio. 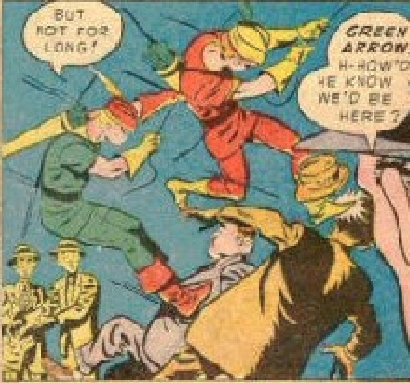 FINALLY! We get to the EPIC battle between Ollie and the Octopus Gang!

Oh.  Or just that.  More like the Octopussy Gang, if you ask me.  The rest of the gang is captured between panels, I guess, since this is the next scene: 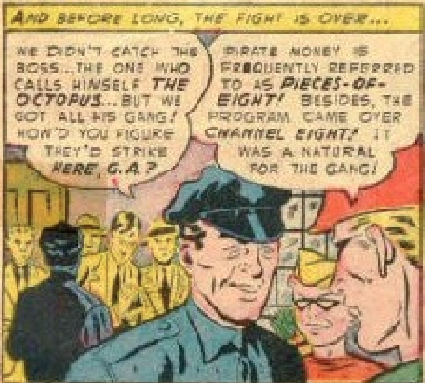 OMG STOP LYING OLLIE YOU FILTHY DECEIVER AND RIGHT THERE IN FRONT OF THE KID WITH THE HAT, YOU SAW THEM ON THE DAMNED TELEVISION!!!

I never really noticed before, but with that hat, Roy looks like he should be working the deep fryer at Steak 'n' Shake.

A few days ago, I got World's Finest #169 - in which Supergirl and Batgirl plot against their male counterparts (Superman loses his powers, has to hitchhike and walks around with a five o'clock shadow much of the issue) - and I was thinking, "Man, this is the dumbest comic book ever!"

Aw, Secret Invasion was a model of clarity and logic compared to Fear Itself.

And say, did the Octopus ever return for another duel of wits with Green Arrow?

Gosh, but this was grand. I can't help but enjoy the thought of Ollie sacked out in front of his television, watching the robbery, and having to drag himself out to actually nab the perps and claim all the glory.

You know he went straight back home, and sacked out on the ol' recliner again with a cold beer.