When we last left the Shield, his gal friend / amateur FBI Agent Betty Warren had just interviewed one of the widows of the baseball players murdered by racketeers.  So, after a host of police authorities have already interviewed the wives, the racketeers—being stupid, like most racketeers—decided that BETTY is the one they need to worry about and try to grab her.

Maybe it’s Betty’s Mickey Mouse Meatloaf Hat that intimidates them.  Maybe they’re just thinking, “Cheezit, a dame! She’s sure to wise up to our racket with her Women’s Intuition ™!”  Anyway, it’s all just an excuse for the Shield to show up to save Betty… 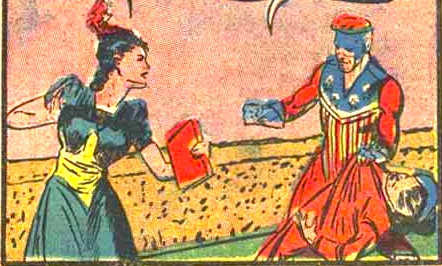 Fashion tip: if the Shield shows up and his outfit looks less ridiculous than yours,
it’s time to go shopping. 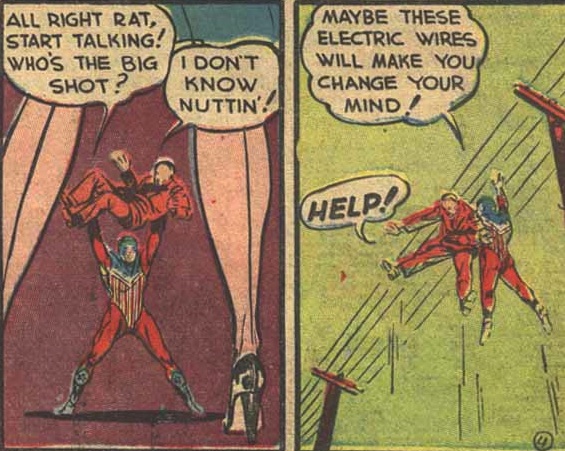 Hey, the Shield's legs open wider than Betty's!  Thanks for the perspective, ant-cam!


And saving Betty is just an excuse for the Shield to torture a prisoner for the reader’s amusement. 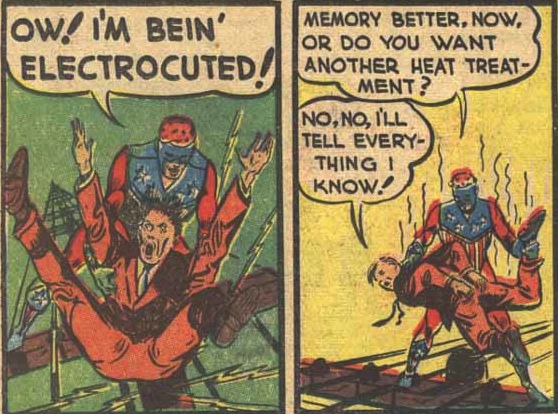 You know, that is exactly how power wires work. 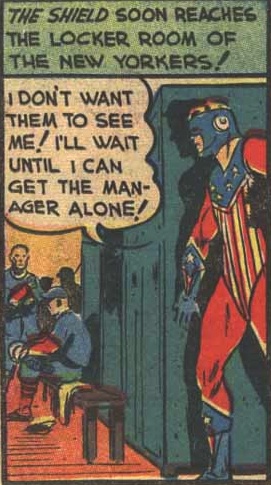 The Shield has many amazing abilities.  He is, however, not well designed for stealth.


Taking the role of a baseball player, the Shield succeeded in getting shot and went to apprehend the would-be killer with flag-based bad-assery. 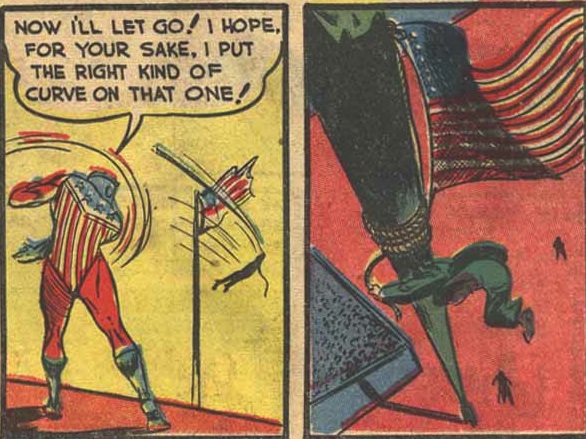 A flag-based hero tossing people around with a lasso?  It’ll never sell.


After what is I’m sure some spectacular off-screen suspect-torture, the Shield learns where the racketeers dwell (because, you know, it’s important for racketeers to all live together or at least have decent office space for storing payment records, client visits, weekly staff meetings, etc.).

Away scampers the Shield on his pointy pointy-toes taking the only logical route....

Truly the mind of the Shield is beyond the ken of ordinary persons such as we.


You know, I've thought and thought about why on earth it would even occur to you to run somewhere along elevated power lines let alone actually do it.  My conclusion is that the Shield does this for the same reason he does pretty much everything he does: because he can.

Anyway, the Shield catches up with the bad guys at their headquarters on 1313 Racketeer Lane.

The Shield? Again, not big on stealth.


Naturally, the racketeers see him coming from a mile away.  The Shield wears a root suit that would have embarrassed Evel Kneivel.  And besides, who the hell else RUNS like that?   So they are prepared... or so they THINK!  They make the mistake of shooting at the Shield; then he does something I don't think I've ever seen another superhero do before or since...

He throws the bullets back at them. 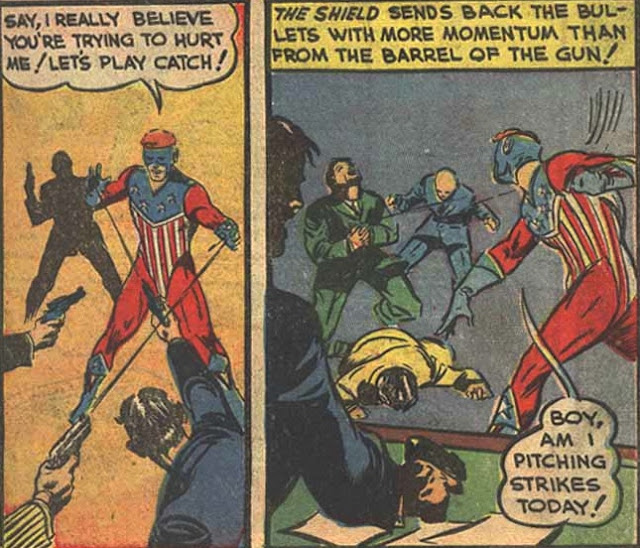 Basically, the Shield just killed three guys by shooting them with their own bullets...BY HAND.  Are you taking notes, Jay Garrick?


Then, believe it or not, things get even SHIELDIER...
Posted by Scipio at 6:42 AM

Well, why wouldn't you run along power lines? They go everywhere, and it's not like you're gonna get caught in traffic. Might run into Air Wave skating along, but that's about it. And, of course, Air Wave is in another UNIVERSE.

One thing about running on power lines: it pretty much REQUIRES pointy pointy-toes.

It always beats me WHY the shield never endured. :)

Well, I guess that explains why he runs like that. And heck, even Superman never threw bullets back at the bad guys! Not that he would, because he's Superman, but still...!

But Superman did run on power lines - in Action Comics #1, no less.

'Course, he did it specifically to threaten and torture a guy.

Heh; NOBODY ever ripped off anyone the way Captain America ripped off the Shield!

Boy howdy, comics were violent then!

Did the real-world even HAVE female FBI agents in the 1940s? If not, well, pretty progressive of the comics to just presume that it did.

Cartoon Network showed a preview for a Vibe animated short next week. Just a PSA.

Ronald: Betty wasn't really an FBI agent. But she was Joe's girl-friend, which meant the FBI let her join in on solving cases. Because the FBI's very mellow about that sort of thing.

SallyP: Yes; they were. Although readers raised on Bronze Age comics still refuse to believe it and bitch constantly about "modern" comics being so violent.

Anonymous: See? Vibe is inevitable. Anywhere on line I can see that...?

Just looked around. Seems like we'll just have to wait until next week to see the complete short. Preview isn't online.