The Shield Plays Baseball... with Death!

Hey, look below , it’s FBI Agent Joe Higgins, whom we know as the superheroic “The Shield”, star of MLJ’s Pep Comics.  At least until the advent of the red-headed devil, Archie Andrews. We've spent a lot of time talking about the Shield, about early Pep Comics covers, and about the Evil That Calls Itself Archie in past posts; check it out if you're not familiar. 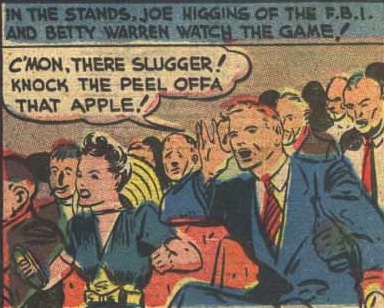 Joe’s attending a baseball game in Pep Comics #7.  Why?  Because baseball players are going to start dropping like pop flies, murdered while playing, and The Shield will go into action as a baseball player to solve the murders.


Sound familiar?  It should. This story (Pep Comics #7, August 1940) is the one KirbyandLee shamelessly aped in their “Captain America/baseball” story (Captain America Comics #7, October 1941), which I did an entire week on here at the Absorbascon.  Even some of the attacks on the players are the same (such as the exploding baseball and sniping from the stands). Eh; who can blame?  An America-themed hero having a baseball story seems almost de rigeur, and they certainly made it an entertaining story for Captain America.

Of course, this is a Shield story were talking about; although you can imitate the plot, it’s got an inimitable style.  For example, rather than the somewhat prosaic deaths in the Captain America story where the players die by blow-dart and psittacosis and desperation and other quiet stuff, the Shield story starts with:

Blowing up an expy of Joe DiMaggio. 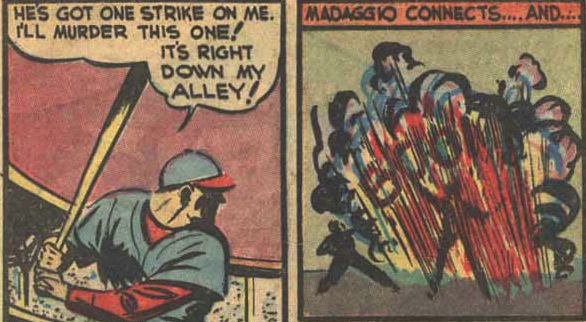 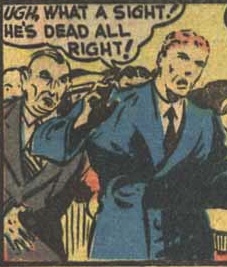 Okay, well, apparently he’s a bunch of bloody little bits spread out over the infield (possibly the outfield, too, and, frankly, before you take another bite you'd better look closely at that chili dog you were eating when he blew up ).  Can’t you just hear Mom that evening: “Hi, honey! How did the kids enjoy the big game at the ballpark?”, while Dad pours himself a double, Susie runs to her room crying, and little Wes Craven starts sketching things out feverishly on a storyboard.

The next player’s death is even more gruesome. Rather than just getting shot, he—well, see for yourself.

And the radio announcer's thinking, "I really want to say 'oh, the humanity', but now I can't".

He’s shot with a special incendiary bullet that makes him catch fire, immolating him as a shrieking horror in front of an audience of thousands, who are outraged that something exciting is happening at a baseball game (“Grab your coat, Mabel; if I went in for this kind of flaming catastrophe as entertainment, we would have gone to see NASCAR or Nicki Minaj.”). 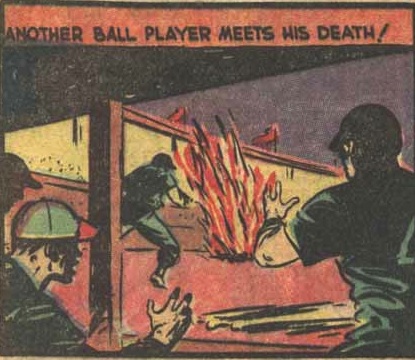 Naturally, it's all part of some goofy protection racket.  Racketeers in the comics never spread the evil around; they always focus their protection racket on something weirdly specific like MLB players.  That way there's an easy pattern for the good guys to spot. 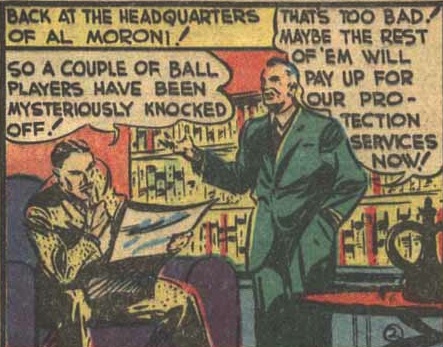 Fortunately for everyone, baseball’s an inter-state crime, meaning FBI Agent Joe Higgins and his gal pal Betty Warren can take the case. 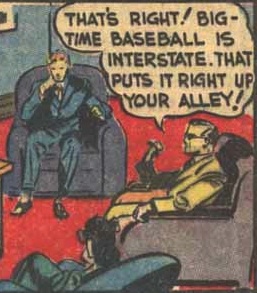 Betty does the sensible, normal thing and talks to the widows of immolated/exploded players and, using her Women’s Intuition ™, deduces that there’s a protection racket involved.

“This sister’s clutching the Fifth like her coin bag at a clip joint!  And I thought my Mickey Mouse Meatloaf hat would make her spill the beans! Gotta find a new whisk to cook this omelet!”  Because that’s how women talked in 1940, you know.


The Micky Mouse Meatloaf Hat may not impress the widows, but it certainly scares the racketeers.  Even though a host of local authorities have already come and gone, questioning the victim's wives, the racketeers decide to attack Betty out of fear that she might come to know too much. 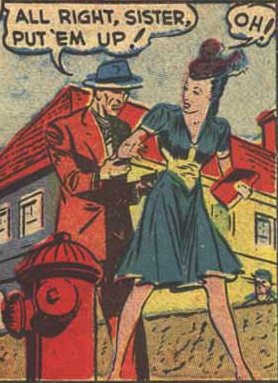 This is because, while criminals are on the whole a superstitious and cowardly lot, racketeers (mere grown up bullies) are just plain stupid, and utterly unaware of it. Or maybe I'm stupid and they are wisely afraid of the unspoken powers of the Mickey Mouse Meatloaf Hat. It's hard to tell; just like Grant Morrison, Golden Age writers "respect your intelligence" and don't spoon feed their readers that kind of info.


Joe Higgins, meanwhile, does what seems like the sensible normal thing to him: turns into the Shield and takes the place of one of the New York Yankees, hoping to get shot at.  Well, at least he picked the team that would give him the best likelihood of it.

Naturally, there are the requisite panels of ‘the Shield being overly awesome at baseball’. 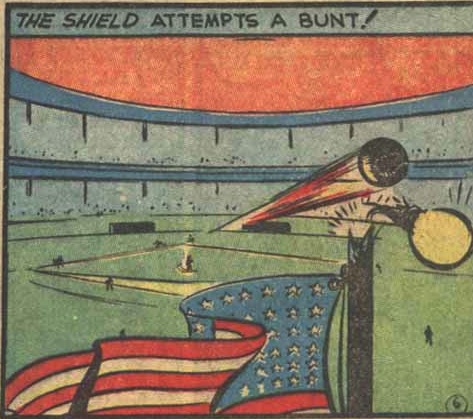 But eventually someone takes a shot at Joe, which of course, just bounces off him.  Hey, he’s not called “the Shield” for nothing. 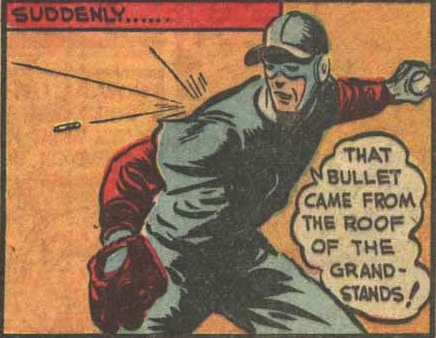 The Shield leaps to capture the sniper with his characteristic flair. 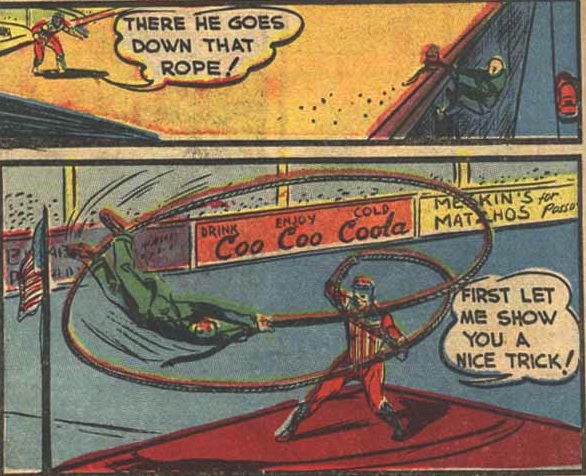 This demonstration of the principle of centrifugal force brought to you by Coo Coo Cola and Meskin’s Matzos for Passover. Wait, what-- really?

Then things start to get really, well… Shieldy (below).  More on that next time. 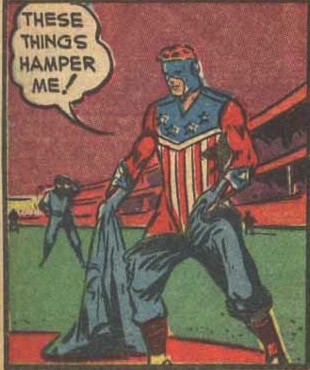 Email ThisBlogThis!Share to TwitterShare to FacebookShare to Pinterest
Labels: baseball, The Shield

So no one recognizes The Masked Marvel as the Shield? He better fire his publicist.

Excitement at a baseball game? Say it ain't so, Joe!

So one player gets blown up and another gets shot by an "incendiary bullet" (whatever that is), and the game just continues? "Oh, sorry for the mess, ladies and gentlemen. Let us scoop up the remains of Madaggio and we'll resume the game in just a minute."

Maybe they were the Greatest Generation, after all.

(P.S. One of my verification words is "incende.")

" You kids and your wimpy athletes.

Back in my day, baseball players got killed all the time while they were playing. Hell, one game I brought one of 'em grenades I used to bash in a Japanazi's skull, pulled the pin, and beamed Three-finger Satchel Louie with it. Had to bury him under third base, they did.

"'Course they kept playing! Those weren't no fancy boys who made billions to ride the pine, they needed to make a home run or all they got paid in peanuts swept up under the bleachers.

"And it was raining! And we had to walk uphill both ways to the stadium! We couldn't park because the lot could only hold ten Packards, real cars, not those electric shavers on wheels you drive nowadays.

I was going to ask how he became "Three-Fingered", but then I figured it out.

Actually, Dave, the second I read "incendiary bullet" my first though was, "DARPA, GET TO WORK ON THIS!"

According to Wikipedia, incendiary bullets were used by interceptor planes in WWII - which means there must have been a swooping fighter juuuuusssst off-panel.

you should them at TANKS and PLANES, not PEOPLE.

The Golden Age was messed up.

Typical. When I think I've learned just about every word in the English language, you pop up with something like "psittacosis" and make me thankful I keep a dictionary by my computer. An entertaining (and educational) piece as always- Thank you.