Basically, he's an evil chemical/medical researcher, the kind who tests stuff on animals. If he were a Flash villain he’d be dirty chemistry versus the Flash’s clean physics. If he were a Superman villain, he’d be a Junior Luthor, whose chemical concoctions would transform the citizens of Metropolis (but mostly just Jimmy Olsen) into all sorts of weird things. If he were a Green Arrow villain—well, Green Arrow would just be dead. Which might actually be a mercy considering how painful his current title is.
The early form of Prof Milo first shows up in Batman #112, when he infects Batman with, well, a lotus-eater gas, for lack of a better term: 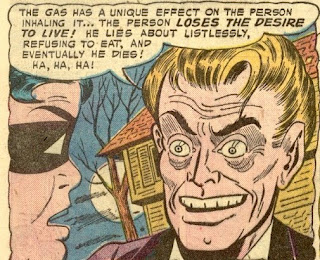 
Batman was going to literally die of apathy if someone didn't give him a sudden dramatic challenge or puzzle to keep him engaged. So Robin and Commission Gordon did the (comic book version of) the logical thing...

You'd be surprised how cozy sleeping in a cowl can be.


They committed him to the insane asylum and told him he wasn't Batman, just a crazy person who thought he was the real Batman. 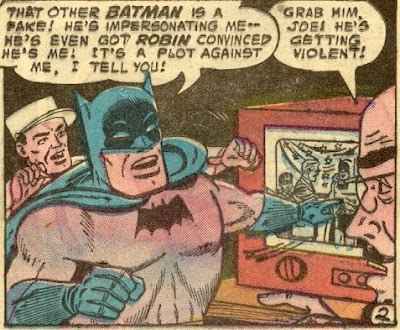 Uh-oh; someone's been skipping his bat-benzodiazepine! Get out the hoses!


No, really, the story starts with Batman escaping from the nut house. 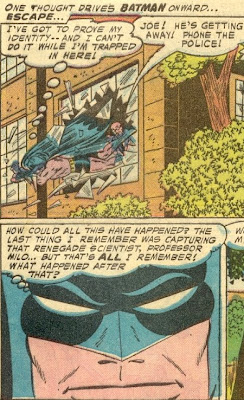 Nice to knows it's always been that easy to escape from Arkham.


Anyway, after an artist's makeover that made him no more attractive, but at least less reminiscent of Cornholio, Prof Milo turns up again in Detective 257 (1958). As Polite Dissent teaches us, Scarecrow’s first use of anything like his “fear toxin” is in Batman #189 (FEB 1967). But Prof Milo had already invented it in Detective 257 nine years earlier. And it was severely debilitating, I might add.There he used his own fear toxin... 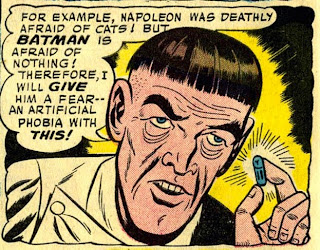 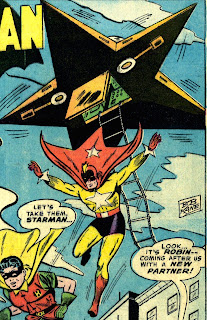 Yeah, you heard me: Starman. 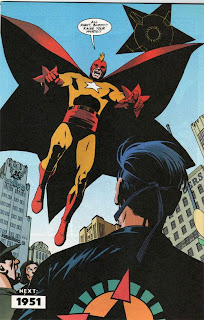 James Robinson tried to suck the whole thing into his Opal City storyline with "the mysterious Starman of 1951." Sad part is, most readers didn't realize that Robinson was actually repurposing a Batman-versus-Prof. Milo story from 1958. Here's panels from each story, side by side, in case you don't believe me.

Comics can be very confusing; sneaky stuff like this is going under right under your nose all the time. You'd be amazed. 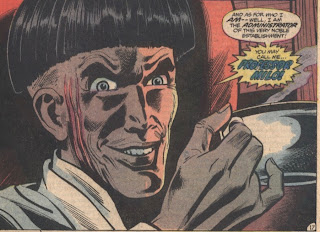 Note the scars; if you can't already guess where he got them, we'll get back to those later in the week. In this story, Prof Milo has (somehow) become the director of Arkham Asylum. He tries to drive Batman insane with, well, a gas that drives you insane. Milo wound up inhaling it himself, which is why in 1989 you can spot him in Grant Morrison's Arkham Asylum, protesting that he is sane again.


His next significant appearance is in Final Crisis Aftermath: Run, where he experiments on the Human Flame. If you don't know who the Human Flame is, just follow the link; it's worth it and I'll be here when you get back. Milo appear several times in the animated DC universes (once as animal experimenter in the "Cat Scratch Fever" episode of Batman The Animated Series; as an ill-fated STAR Labs researcher in Justice League Unlimited; and as his true villainous self in Batman: Brave and the Bold where he uses mice to commit crimes). 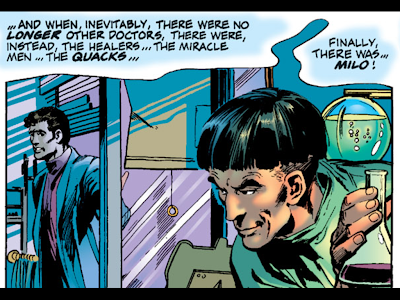 So, now that Prof. Milo has extorted a dangerous werewolf into his thrall, what does he want him to do?

When did the story appear where Milo experimented on a comatose Guy Gardner and give him his strange taste in haircuts?

Great Scott! I want a HeroClix conversion for the 1958 Starman.

And a model Starro-Plane as well.

Yes, throwing together a star-shaped hovercraft for just one story is rather over the top, even for the Silver Age Batman.

Scipio - I believe we have our first New52 Vibe siting:

What is that green thing in Milo's mouth? Spinach?

That said, the reflection in the glass is VERY nicely done.

Wonderful profile! No, not Milo, the article ...

... I never knew he had a first face, I thought he'd always been a Joan of Arc homage act.

So Anthony Lupus's choices are:

1. Deal with crippling headaches
2. Fight a superhero who can cripple him.

The Stupid Bronze-Age Batman is a very easy target, and your merciless skewering of "Moon of the Wolf" is not only well-deserved, it is also highly entertaining and even, dare I say it, educational.

But don't you think your extension of the Stupid Bronze-Age Batman all the way to 1986 is a little overbroad and perhaps a tad unfair? I (mostly) shunned the Batman comics in the late 1970s, but at the end of my teens, I started buying Batman and Detective about 1981 or so, when Doug Moench was writing and Gene Colan and Don Newton were on the art chores. The Crisis messed it up, sure, but there were 4 or 5 years there where the Batman comics were a hell of a lot of fun, with Harvey Bullock and Killer Croc and my own personal fave, Nocturna.

You're not gonna start bagging on Nocturna, are you? (Oh, dear. Maybe I shoulda kept my big mouth shut.)

If you're going to tear some more Len Wein stories to piece, carry on!

Hoosier; There are some things gentlemen do not discuss. Nocturna is one of them.

Have you read my posts on Crisis on Infinite Earths, which in 1986 features the full-on, stuttering mess that is the Stupid Bronze Age Batman...?

Scipio: I've been reading Absorbascon on and off for 5 or 6 years at least, but I don't remember any post on Batman during the Crisis.

So I might have missed it. Or maybe I just don't remember it because your post mirrored my own thoughts on Batman during the Crisis (or anything during the Crisis, for that matter) so closely that I just internalized it.

I will go looking for it.

P.S. Remember the Film Freak storyline? I re-read that not so long ago. Batman, Robin (Jason Todd), Vicki Vale, Julia Pennyworth, Harvey Bullock and Catwoman all running around after a villain who was a failed actor who used classic movies as inspiration for his crimes (after faking his own death, natch).

Thank God they had the sense to turn him into drama fodder as a casualty at the beginning of Knightfall! What an exit! A fitting end, I say!

I loved the Film Freak storyline. They should have paired him with Basil Karlo.