So "Moon of the Wolf" begins with a werewolf climbing up a skyscraper (because we all know how wolves just love to climb up cliffs and trees and such) .... 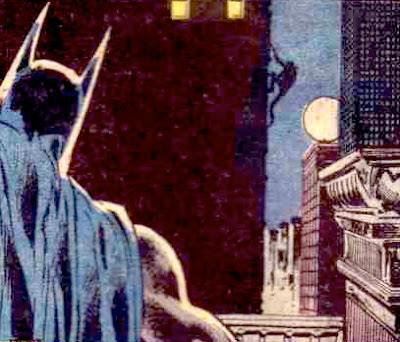 to attack a peignoir-wearing 23-year-old female secretary. Why?

Don't worry; if you watch a lot of horror movies, you know that the dog always survives. 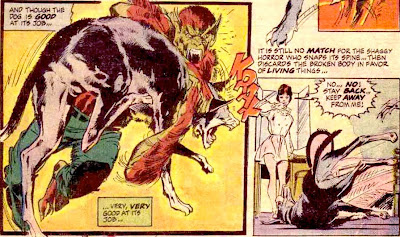 Whoops. Guess Len Wein doesn't watch a lot of horror movies.
Does the werewolf want to eat her? Rape her? Kill her? All of the above? Why her? Has he met her? Does she have something to do with the backstory? We get zero clue and won't get one. She has no connection to anything; she's merely a prop to establish The Villain as a threat. She did get a name though, because in the 1970s comics were obsessed with naming every little character; in the 1970s even the Joker's guards at Arkham Asylum had full names (Benny Khiss and Marvin Fargo). It was some sort of gritty urban personalization-means-realism thing. Because what readers expect most in a story about a rich guy dressed like a bat fighting another rich guy who's a werewolf in a downtown metropolis is realism.

Even though there must be hundreds of more easily accessible victims, this werewolf choose to climb this skyscraper and climb in this random woman's window solely so that Batman can see him and initiate conflict.

"Crud"? "CRUD"!? "Crud" is not a Batman word. Batman does not talk like a tough but virtuous trucker coming to the aid of a sexually harassed diner waitress in a low-budget action movie. Stupid Bronze Age Batman.

THAT is bad plotting. So bad the writer nearly admits it: 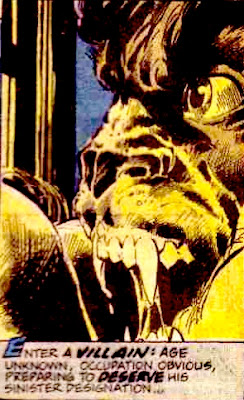 "Um, hey, readers, here's your villain and that's why he doing bad things. Like climbing up the side of a residential skyscraper for no particular reason to break into a random apartment with no motivation or goal. Hey, is it Happy Hour yet?"
When you read that sort of thing, you can tell the writer has pretty much given up, right from the get-go. But I guess we should know that from the very first narrative box, which starts with " 'tis". 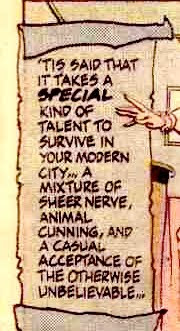 " 'Tis said it takes a special lack of talent to survive in Bronze Age comic book writing... a mixture of sheer nerve, amateur pretentiousness, and a casual acceptance of otherwise unbelievable prose and plot."
When you read " 'tis" in a narration box, the best thing to do is to put the comic down and just walk away.

So, why doesn't the werewolf victimize someone on the GROUND, where (were-)wolves actually might reasonably hunt? Well, so that the werewolf can throw his victim out the window, of course. 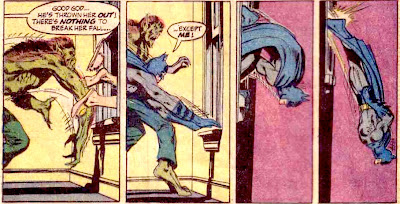 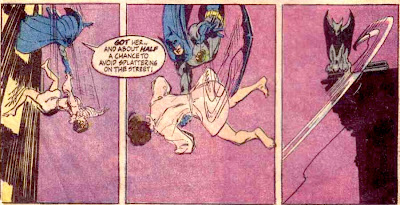 Or not.
Then Batman nearly kills himself doing something (rescuing a falling person) that in the post-Crisis DCU he does daily with no effort at all, like you or I would stretch in the morning. Stupid Bronze Age Batman.

During all of this, Batman assumes that the werewolf is in fact a guy in a costume. Now, one can understand being skeptical of assuming someone is a werewolf just because they look like one. But (a) this is the same Batman who fights Man-Bat every six months, and (b) when Neal Adams draws a werewolf you can damn well see it's a werewolf, not a guy in a costume. Stupid Bronze Age Batman.

After this awkward, dog-sacrificing incident, Batman visits Commission Gordon, who apparently can see in the dark. 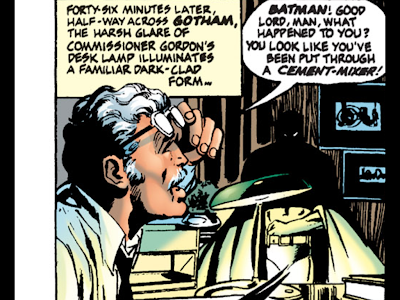 "Yer a funny guy, Jim; wanna find out just what the inside of cement-mixer is like some time? Keep it up."

Meanwhile the werewolf runs back to his, um, were-den. 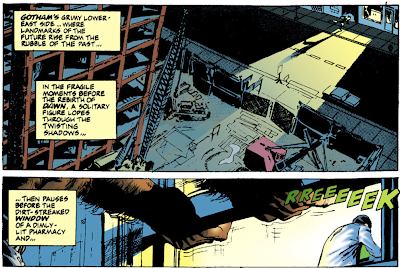 The dirt-streaked window of a dimly-lit pharmacy?
Good lord, CVS has expanded its monopoly into the DCU!

So, how did there come to be a werewolf in Gotham? Tune in tomorrow...!
Posted by Scipio at 4:00 AM

By the way, some other special touches to notice in the Janet Bonner scene:

(1) Apparently, between the time she changed out of her work clothes and into her pegnoir, Janet bought a new bed, because it's suddenly a four-poster.

(2) Janet's window is already open, with the lower panel pushed up. So Batman chooses to crash through the closed part, breaking through not one but TWO panes of glass. Stupid Bronze Age Batman.

(3) In the panel where the werewolf throws Janet out the window, the detritus of the broken glass is nowhere to be seen. I'm guessing Janet's windows have a mutant healing factor.

I'm going to give Batman a break on the batarang. Batman may do it effortlessly all the time these days, but isn't that a little fishy? A man who is explicitly not superhuman should occasionally have to work just a little to accomplish things that would be completely impossible for the rest of us. (Impossibler even than all the other impossible stuff we're talking for granted, such as safely traveling by rope every night for years.)

Also, these days Batman has his gas-propelled grappling hooks; he didn't back in the Bronze Age.

But on the balance, yes. I've said it before and I'll say it again: DC didn't need to destroy the multiverse in 1985; they just needed to get better writers, and probably more importantly, better editors.

Weak story notwithstanding, that is some beautiful, beautiful Neal Adams artwork...

Strawman: Agreed. But in a way it's sad; think how nice it would be if the story were as well written as the art is well drawn.

I'm not so sure about the artwork. Is that thing supposed to be a dog? If that came at me I'd wet my pants. It looks like the hybrid of a lynx and a wolf. Janet sure didn't pick him out at Adopt-a-Pet day at PetSmart.

Actually, that could explain the Wolfman's attack -- he smelled another unnatural hybrid creature and was compelled to attack it. Janet was just in the way (and hot, and scantily clad).

Of course, that won't happen. But somebody fire that off to Geoff Johns -- he could put something together. After crediting Dean Koontz, of course.

Well, Batman is certainly being a bit of jerk. I can only assume that the lovely Janet did something unspeakable to the poor werewolf...because let's face it, your average dog/wolf/whatever would prefer to lie around in front of a fire, instead of climbing up the side of a building.

It's also possible, that the werewolf was upset that the dog was cheating on him with Janet.

I'm just impressed Batman was able to climb the wall of a building without running into a 60's B-list celebrity.

Also, the werewolf goes through two windows. Bronze Age Batman would be out of a job if people in Gotham would just start locking their windows or at least buy decent screens.