How does one design a travel poster for Apex City, home of the Martian Manhunter? How can you hope to capture the craziness? The bizarre landmarks, like the Statue of Atlas? The ludicrous weather, like the weekly meteor showers? The strange threats like the ubiquitous flying saucers? The seaside location and the Miami-like towering buildings? And if can you do all this, how do you then manage to subtly incorporate the city's hero, the Martian Manhunter himself, into the mix? 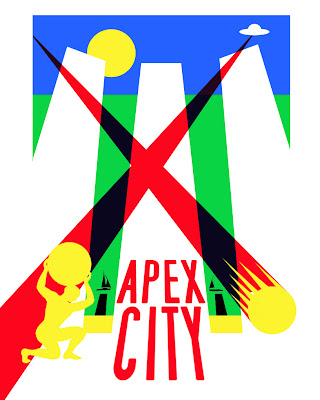 Although I may have to do another version, just to see whether I can hang the Human Squirrel off the side of one of those buildings...
Posted by Scipio at 7:49 PM

Oh my. That IS inspired.

LOL, I'm going to assume those are compliments.

Absolutely a compliment! I was trying to find where J'onn was "hiding", and then I realized where: THE ENTIRE EXPANSE OF THE POSTER.

Jeez, I keep seeing more and more. Scipio, was this intentional: the blue/green shape looks like a stylized body, with green legs, green forearms, and a truncated blue torso. J'onn wears blue underpants; did you deliberately work J'onn's arms, legs, and underpants into the poster?

I was SO looking forward to this, and I do have to say that I am not disappointed.

And the "X" made by the red beams echoes the strapping on J'onn's chest! Magnificent!

THank you, Sally. Anonymous, I wanted to poster to evoke or symbolize J'onn without him actually appearing in it. As Sally pointed out, the red meteor trail and the spaceship ray echo J'onn's red straps, the yellow circle of the meteor and the of the globe atop the statue of Atlas symbol the two big yellow medallions on his costume; the green of the sea and blue of the sky are meant to bring to mind J'onn's torso and cape.

None of these things are TOO explicit, I hope. I wanted it take a minute to soak it before you realized why it makes you think of J'onn.

The huge red "X" was what initially struck me as so inspired, but it took a minute to spot even that.

The big blue underpants were less inspired and I'm glad they were only my imagination.

I love it. The meteor streak/harness strap makes the whole poster.

Are those lit torches between the buildings? If so, nice touch.

They are piers with boats laid out to REMIND of lit candles/torches.