As we were discussing in our previous post, Bizarro's change in personality and powers when he returned in Superman #306 are examples of the Bronze Age grim-ification of the DCU.
Silver Age Bizarro was just a wacky misfit, as the in-story recap relates: 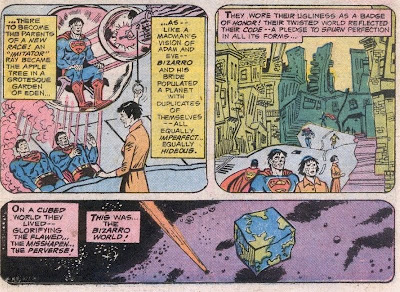 Glorifying the flawed... the misshapen... the perverse! This was... Wizard World.

But the Bronze Age story makes it very clear that "Bizarro has changed; he wasn't a threat before but now he is." Note that in the panel below, Superman implies that he used to be superior, power-wise, to Bizarro (who was, after all, "imperfect"), but now Bizarro is his equal or superior. 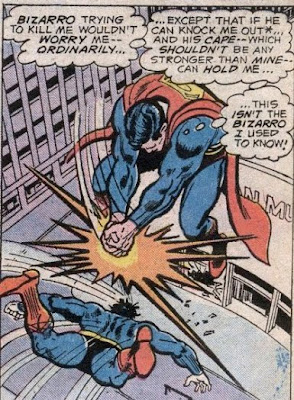 And this must be true, because Superman is nearly infallible, you know.
This is also the point at which Bizarro's heat vision and freeze breath got "reversed", surprising him and Superman both. 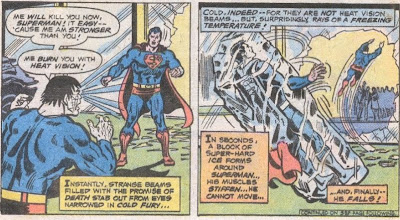 Notice anything about Bizarro's speech patterns, kids? They aren't "opposite". Bizarro says exactly what he means (albeit "imperfectly"). Only later, during the Post-Crisis Iron Age, did writers hamper Bizarro with the annoying affectation of "opposite speech", which does nothing but confuse the reader. If anything, it makes Bizarro seems smarter than us, since he understands what he's saying and we don't. DC; please start that; me am love brilliant Bizarro opposite speech.
Anyway, Bizarro was suddenly stronger, stupider, and a lot more emotionally volatile.

And, therefore, a lot easier to start using as an actual villain: 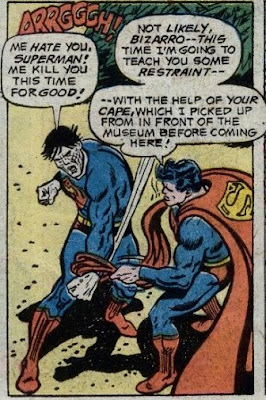 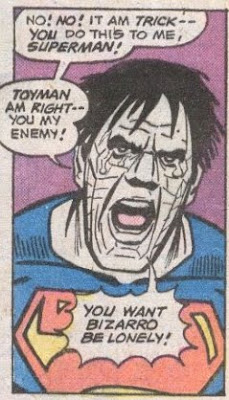 This story was published in 1976.
Bizarro joined the Secret Society of Super-Villains in 1977
and the Legion of Doom in 1978.
So Superman decides to get the bottom of this mystery, and find out why Bizarro thinks his world is gone and what changed his powers. Which I'm sure Superman will, because Superman is nearly infallible.

While the Bronze Age may have changed from the Silver Age in tone, in other aspects it was nearly indistinguishable. For example, in its reliance on utterly stupid hand-waving plot devices. Like... cosmic clouds. 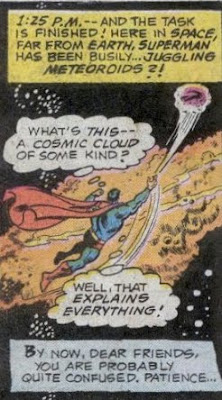 Yes, I am confused; and don't call me "Patience".

Well... that explains EVERYTHING! At least, it does if you're Superman. Who's nearly infallible, you know. 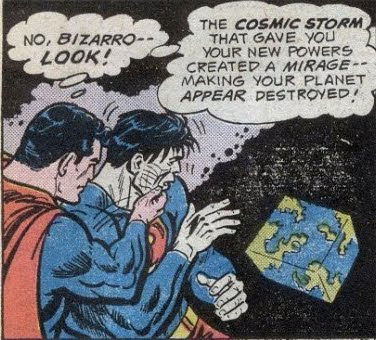 Turns out Bizarro flew through a "cosmic cloud", which changed his powers, caused a mirage that made it seem as if Bizarroworld had been destroyed, and altered Barak Obama's birth certificate to read "Born in the U.S.A.". It's just amazing what cosmic clouds can do; just ask Reed Richards.


Oh, and another thing didn't change from the Silver Age to the Bronze Age. Superman was still a total... oh, what's the word I'm looking for? 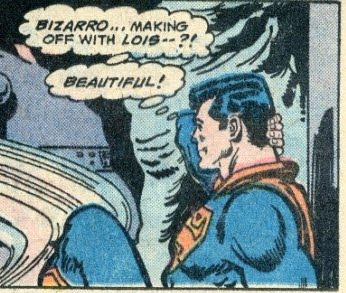 "Great Rao, if I'd know it was that easy to get rid of her,
I'd have given this bozo his own room at the Fortress." 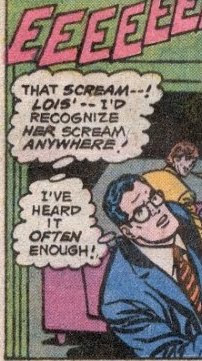 Jeez, Clark; that's TMI about your love life with Lois. 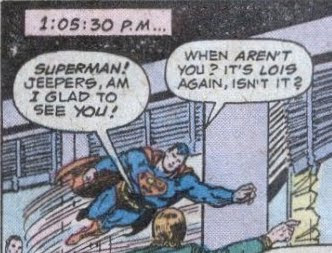 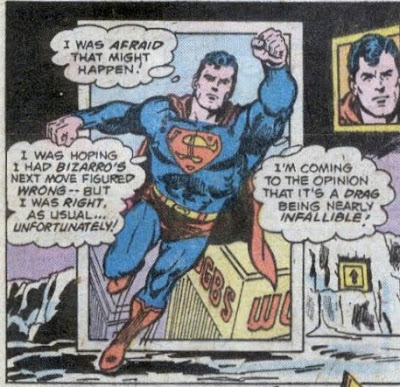 I was right, as usual. Because I'm nearly *sigh* infallible.
And yet, my face (pictured at right) is STILL not on the quarter.
Anyway, you'll remember that all this hullabaloo started with a big fight involving the Toyman at the Metropolis Coliseum. Now, I'm sure you think of the Toyman as another innocent hold-over from Superman's Golden & Silver Ages; you're probably thinking, "Wasn't his murder of Cat Grant's son (Superman #84, 1993) the first time he ever even killed anyone?"
No. No, it wasn't.
In this very story Toyman kills a host of guards and policemen as part of the battle at the Coliseum. 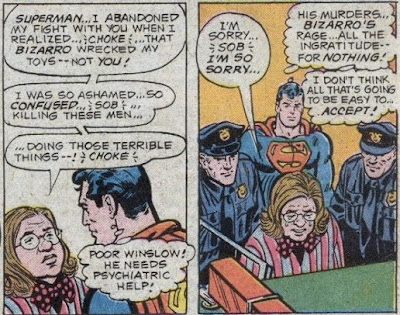 "Poor Winslow! Being alive, unlike all his victims, whose surviving friends and families I'm not thinking about at all! Why? Because I'm just too focused on all the ... the ingratitude of it all. Ingratitude toward ME. What's WRONG with you people?!"

This reads like a Marty Pasko shitacular script. He sucked.

Who *is* responsible for Bizarro only using "opposite-speak," by the way? And may I kill him?

This is the book that has my favorite line ever- "Oh No, this am part where Bizarro world am destroyed!"

Thank you, thank you for pointing out how horrendous Bizarro-speak is. It wouldn't be so bad if it held constant, but it just plain doesn't make any sense. The opposite, for instance, of "I" is clearly not "me." It's an annoying mix of the way DC used to have babies talk ("Superbaby am angry!") and the writer just arbitrarily choosing which words to flip.

Dunno what happened to my earlier attempt to comment, but:

Thanks for this - I've been wondering for a while when this switch to the darker Bizarro happened, though I realize I do have a dim memory of reading this story.

I still get a chuckle out of the silliness of the original stories (collected in "Tales of the Bizarro World" a few years back.

There used to be a guy on the Usenet rac.* groups who posted as "Bizarro #1" and had absolutely mastery of old-school Bizarro-speak and wielded it beautifully as a weapon of irony.