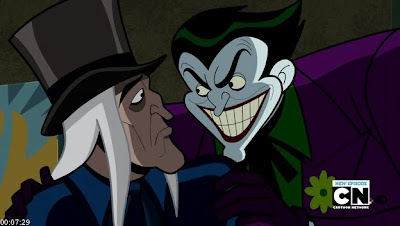 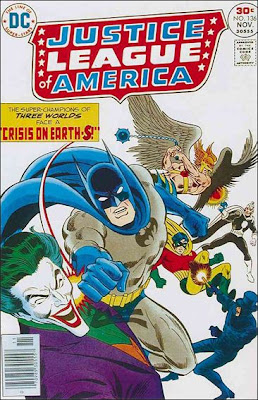 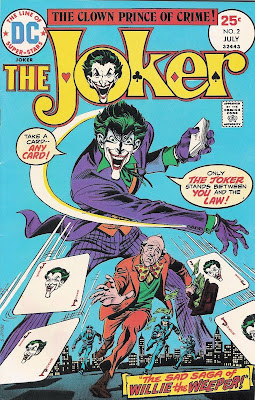 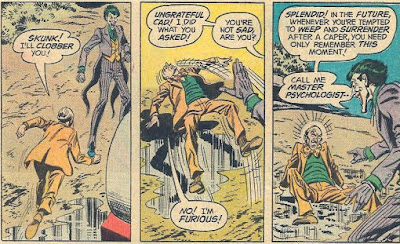 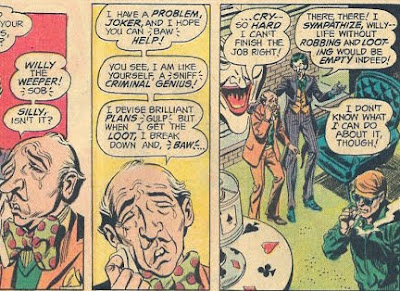 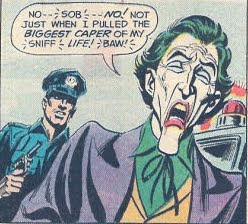 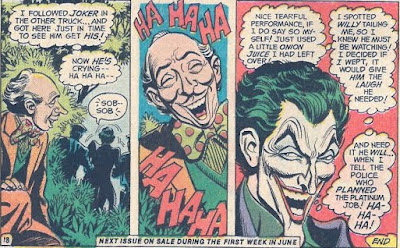 You, sir, are so amazing, it's scary. You're scaremazing. If you were a DC Universe hero, no villain would escape you. You even have a perfect comic book name. (That is your real name isn't it?)

LOL, it is, though I think now that I want to change it to SCAREMAZO!

Actually, thank you for that feedback, R. I often STOP myself from writing posts like this because I think, "Well, everyone knows that, or can find that easily on the internet already."

It's good to be reminded that sometimes just gathering such information together is a service to some readers.

I can't believe that was Tim Conway: he sounded so positively Spongebob-ian at times that I was sure it was Tom Kenny.

Huh, I would have expected him to remind you of Barnacle Boy instead...!

Cobra, I believe you're thinking of the cover done by E. Fudd.

The Earth-2 Joker fought the Huntress during her pre-Crisis bonus-story run in "Wonder Woman". Pretty good story, as I recall. I miss Helena Wayne; Helena Bertinelli just ain't the same.

E-2 Joker also had a nice cameo in the final issue of Brave and the Bold, where the main bad guy (Brimstone) comes out of a coma after 30 years, unaware that (E-2) Batman is now dead.
Brimstone: "Batman did this to me...but he'll pay!"
Joker: "I doubt it, pal; unless you've got a terrific collection agency!"

Am I the only one who thinks they went a little bit too far in making Batman an antagonist in this episode? Especially the scene where Joker and Weeper are apparently crushed by the falling statue, and he does nothing. I kept expecting to learn that this was Owlman in diguise, or Batman was suffering from the effects of an alien gas, or something.

Also, it's getting depressing to think that there aren't too many episodes of B:tBatB left :(

I had the same thought, TotalToyz, and then I realized that we're seeing Batman from the Joker's point of view. So there were lots of little things that were out of whack, like his arrogance, the totalitarianism, the brutality, etc. It was rather jarring, though, until I figured it out.

Also, Batman's anti-crime brain reader thing looked totally like Sauron from the LotR movies. That can't be an accident.

Yep, recognized him right off. I have that Earth-S issue, and it's also the first time I ever encountered Mr Scarlet and Pinky.

So, Scipio....is it time for custom HeroClix of the original Weeper and/or Willie the Weeper?