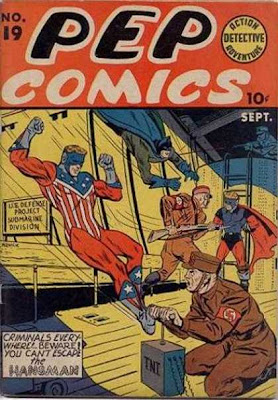 10 cover signs you are losing control of your comic book.

Some guy dressed like Batman gets a more dramatic entrance.

Instead of fighting bizarrely garbed freaks you're fighting slow-moving extras from the Sound of Music.

Your sidekick looks bored silly and disgusted with it all.

You're not Aquaman, but you're still guarding submarines.

Your opponents don't outnumber you.

The artist feels the need to draw motion lines.

You keep forgetting to point your toes.

The text warns criminals about the guy dressed like Batman, instead of you.

Your main activity is falling.
Posted by Scipio at 4:59 AM

Ah yes, even then, the Shield was losing control.

But as we all know, it is not to the Batman cosplayer that he would eventually submit...but to America' Typical Teen-Ager!

To be fair, though, those red and white vertical stripes are very slimming.

Ah, but where is the stripped man now? Uh? Tell me! Where is him?

I want to see him :P

There's not even a scantily clad damsel being tortured on the cover?

I blame it all on the Vulture's retirement. Went on to become a Broadway producer, I'm told.

I'm sticking with my theory that, when America's Typical Teen-Ager drove all super-heroes out of his clean, orderly universe, the Vulture got an ear job, went on an eating binge, and became principal of Riverdale High.

These are all also warning signs that you may have your character concept copied by Jack Kirby...