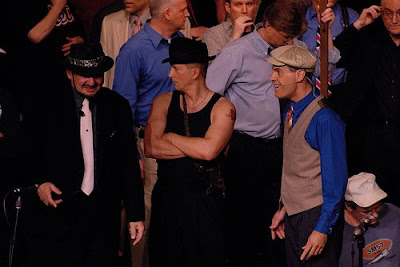 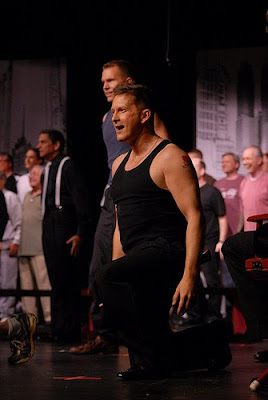 We've been very busy with shows. Back soon very soon, in force!
Meanwhile, enjoy some more pics.
Posted by Scipio at 9:54 AM

There's nothin' like Civic Theatre, for a rollicking good time.

If I may be so bold, it occurs to me that Scipio must be one of the only comics bloggers who is actually built like a superhero.

Well, I don't have my own blog, but I'm built like a superhero!

And Uncle Marvel does too count!!!

No, a friend and I wrote the script; "A Harmonizer on Broadway", the story of young actor hoping to make it big in the Big City, a surprisingly helpful cabbie whose more than he seems, and an 'entirely legitimate businessman' with an agenda all his own.

It was written as a star-vehicle for my Ken who is in the blue shirt and vest beside min the first pic...

Oh, it's just a temporary tat for the show: a heart with the name ...

of someone else on the show.

Cabbies aren't just "surprisingly helpful" here in New York. They're helpful by nature. Always willing to point out which races/religions are causing all the problems in the world. ;)

It's like that Kids In The Hall sketch, you can really catch an earful of hate sometimes. The best is when they engage in road rage incidents with their hired car colleagues...

When do you have the time to do everything?