Marvel gets it and DC doesn't.

Today I discovered that Marvel seems to completely understand something that DC doesn't seem to grasp at all.

It has to do with marketing their products.

On the desk in front of me is the "Marvel Reading Chronology 2009", a free publication send in quantity to retailers which presents "Marvel's stock of in-print collected editions inventory organized in a fun new way!"

This publication is, perhaps, the single greatest marketing tool I've ever received from a publisher. One of the things I do for Big Monkey is produce guides, both to specific publications and to topics. For example: 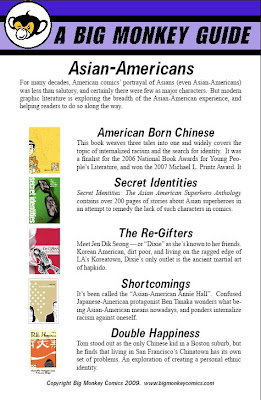 While I have done guides for eras, topics, and creators, I hadn't done any yet for particular characters. I was dreading the quantity of research needed to identify all the appropriate TPs, GNs, and HBs for all of Marvel's characters. I'm not exactly an expert on the history of the Hulk, ya know... .

Marvel, wisely realizing that customers are interested in boning up on particular characters and that it's a easy avenue of approach for retailers, has compiled these lists quite thoroughly in this new publications, which is colorfully but elegantly arranged, and includes pictures of the all the covers, what each volume contains, and who its creators were.

I spoke with my DC rep today to convince them to do something similar. I got some palaver about checklists of the titles involved in crossovers being listed on the DC website. That's nice, I said, but you don't seem to understand. I couldn't even get an understanding that retailers need a visual aid to sell Showcase and Archive Volumes (which are simply impractical to stock in full-- there are way too many, and, while they are wonderful and unique offerings, they do not exactly fly off the shelves). Yes, DC thanked me for having given them that idea in a previous conversation, and they were planning on making a checklist of those, too.

Yes, that's nice, I said. But you don't seem to understand.

I want a publication, something that... that combines words with pictures of what the words are taking about. I need a piece of writing with attendant images, a sort of... graphic literature. Can't DC produce some form of graphic literature that I can use to promote my sales of your products...? Surely, DC, you have some grasp of the power of combining pictures and words into a unified whole for the presentation of an idea or story?

But, oh, the comic book irony...! Unfortunately, it seems to mean that Marvel understands the need to create for retailers easy visual references to their products.... and DC does not understand it.
Posted by Scipio at 4:49 PM

I think this ties in with the point I tried to make a few weeks ago regarding how Marvel and DC handle pop culture references.

Marvel assumes that its customers are uniformally twelve year old boys (or their parents). Thus, endless bickering slugfests, disinterest in family life, attempts to prove themselves hip, and hand-holding the consumer.

DC assumes that its customers are uniformally forty year old men who cackle with glee at the thought that Donna Troy might return to her classic costume (whichever that may be), wish for the day when we have One True Origin for Hawkman, and dream that, someday, Streak the Wonder Dog will get a backup strip in JSA to Alan Scott's chagrin.

Obviously, I'm exaggerating both models, and there are good and bad points to each. You've just hit on one of the best points of Marvel's approach: You can't give customers too much information when they're trying to decide where to spend their money.

"Streak the Wonder Dog will get a backup strip in JSA"

Actually, your points are strong and interesting ones, John. It's not just where they're coming from... it's also their assumptions about their audiences.

No matter that those promotional magazines listed twenty titles inside and only nineteen in the alphabetical list on the back cover.

I would only be on-board for Streak if there were a writer who could handle the Kanigherity. And if it brought back bad memories of being kicked out of his own book for Alan. But otherwise, you'll note that I didn't say DC was very wrong in their assumptions...

I do, though, think they envision obsessive fussbudgets who already KNOW where everything has been published and need guidance on new (higher-markup) material to buy. So crossover checklists but no PBS-like "to learn more about this character" notes. Maybe it's because DCUGuide.com exists, too--why publish an Itty checklist when the customers have already done so?

Hm. It's been a while since I last picked up a Marvel book, but they still do the inside-cover recap, don't they? That's really just the old-timey footnotes rearranged so that it doesn't cover the art, right?

Hee. The aforementioned DCU Guide states that "This page and all text herein is Copyright © 109." The Y2K Bandit strikes again! But otherwise, if you're interested in developing character guides for customers, they might be a good place to start. Or just ignore their supposed rights, since a list of data can't be copyrighted.

Yes, they did. And those are nice. It's twenty titles in detail; it's much like the individual guides I make for works in our Comics Canon.

But a sweeping catalog arranged by character and team it's not. It's not hard for them to devise; they just don't seem to see the utility in it.

I'd start buying Supergirl again if it had a Streaky back-up feature. Best super-pet ever!

With all the Crises and what-not, it might be difficult for DC to decide how to list its trades. Does everything Superman go under "Superman?" Do you break it up into "Classic" vs. "Modern?" Where do non-continuity (but not Elseworld) tales (e.g. Superman: For All Seasons) fit in? Is "Man of Steel" still canon, or "Birthright?"

Marvel, at least, has a fairly linear continuity. I don't care if a story "counts" or not, but other readers do. DC must have a harder time sorting its backlist. That's not to say that they can't or shouldn't, of course.

As an aside, I can ignore pop-culture references in old comics, but not outdated technology. Big cell-phones and dial-up modems take me out of a story faster than someone talking about The Beatles.

Sadly, this could also be indicative of the amount of money budgeted to each company's marketing department. Yes, advertising sells, and you CAN do a lot with a limited budget, but limited budgets only go so far. Historically, DC has always done well (in the long run) with word-of-mouth -- which is the primary seller of their Vertigo titles and trade publications. Since DC trades consistently outsell Marvel trades in main distribution chains, that approach seems to pay off for them. DC's backlist (consisting of many bestsellers with VERY long shelf lives, such as Sandman and Dark Knight Returns) is the envy of ANY publishing company.

However, DC also seems to think the word-of-mouth approach will work with their main comic book sellers. NOT usually the case, as you know (though, lately, Green Lantern seems to be an exception). Marketing departments are also VERY stubborn and don't like it when people give them reasonable, logical, outside advice. It usually gets them into trouble in the long run -- and gets them layed off.

Then there's Marvel. Marvel spends marketing money like they have an unlimited supply. Sure, it gets people to buy comics, and it packs the theaters. However, I can't help thinking that it's also partially responsible for Marvel's fiscal problems of the last decade. That, and how much are they sacrificing in the name of quality just because they (seem to) think they can make something "better" by throwing money at it?

In my opinion one and all should browse on it.
cheap automobile insurance | create photo album | hotels magnificent mile chicago illinois | bhutan travel | jobs in Halifax

Goodness, there is really much useful material here!
metal buildings