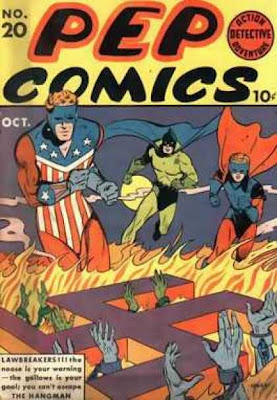 Pep Comics heroes do not mess around, boy.

They will simply chain you in a pit, and set a crushing, oily iron swastika on top of you. Then they'll set it on fire.

And just stand there and watch.

Do not mess with Pep Comics heroes.

I don't know; looking at the cover, I'm not sure it's not supposed to represent the Shield, Dusty, and Hangman racing to the rescue of the millions held under the oppression of the swastika.


(But then, I think the Mona Lisa is smirking because she just cut an SBD.)

I like to think that the Nazis accidentally tipped it onto themselves (like the guy on the vending machine warning signs) and the heroes are lending them a hand. I mean, those poor Nazis always get the short end of the stick. What'd they ever do to anybody?

OK, then. Thematically, wouldn't it be more appropriate for the Shield to (ahem) put out the fire for them?

And chain you up too. A nice little extra touch.

Actually the Shield is just dancing a little dance as he watches people burn to death in his Nazi Death Furnace.

Dancing no doubt to disco versions of Sousa songs.

I was going to comment on what an absurd concept that is. And then I remembered Walter Murphy's A Fifth Of Beethoven. Still absurd; just not implausible.

And,
in case never noticed,

That's why you can't dance to them.

No, I never did notice that. But then, I never noticed that Redbone's Come And Get Your Love is set to a Native American tribal chant until it was pointed out to me. My ear is so tin you could pack sardines in it.