All heroes/villains are not interchangeable. Oh, back in the day, perhaps, there was an almost disturbing similarity between characters; every hero was pretty much the same as every other, just with different abilities. Villains sometime had a theme that helped distinguish them from one another, but that seldom amounted even to a difference in style let alone substance.

Nowadays, we've put some more tools in our literary toolbox to make the writers' job easier. Not only are there varied heroes, villains, and secondary characters, but many are specialized tools for special jobs. They are the "go-to guys" of comics, and deserved to be recognized as such.

For example: you want to write a story where crazy, impossible things happen, particularly ones that are cool to draw like protagonistic dismorphia. And you may to set a bizarre situation or problem to solve, not just a simple bank robbery. But in the end you still need a villain who can be taken out with a punch in the jaw. Who do you go to....? 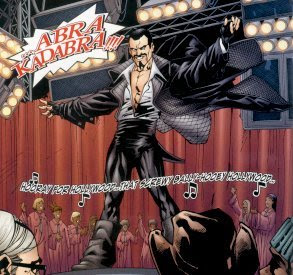 He's as goofy or as terrifying as you need him to be! 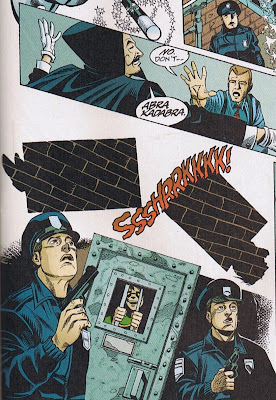 Let's see, with Abra Kadabra I can... 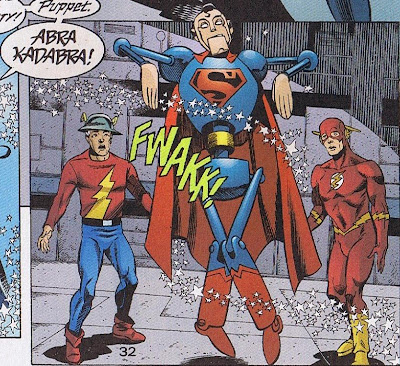 turn Superman into a puppet 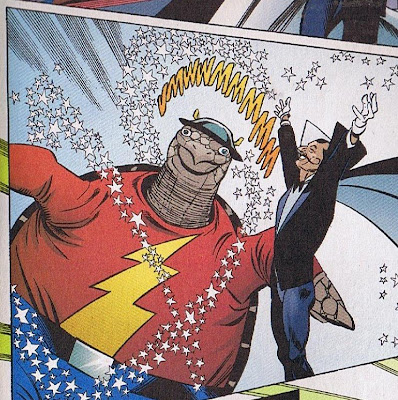 turn Jay into a turtle 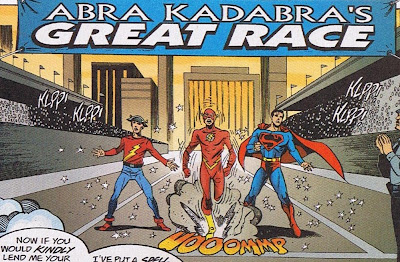 and force heroes to race to their deaths.


And why...? That's the best part. Abra Kadabra's motivation is the same as the writer's: 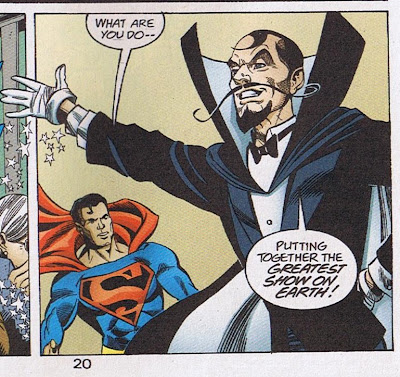 he just wants you to be entertained.

Ladies and gentlemen, a big round of applause for our first Go-To Guy: Abra Kadabra.

Email ThisBlogThis!Share to TwitterShare to FacebookShare to Pinterest
Labels: go to

Oh, this is going to be fun. My mind is already categorizing various "Go-To Guys."

Marvel Comics has their own "go-to-guy", or rather an exit strategy.

Written yourself into a corner? Trapped in a storyline that seemed like a good idea at the time? No conceivable way out?

He turned out to be behind the whole "Heroes Reborn" train wreck, as well as "The Crossing", and I suspect he'll put Tony Stark's personality back the way it was any day now.

I agree with Sally. The only thing that might improve the panel is if the following panel was the two Flashes just...walking out.

Although cropping it so that the most prominent feature is the word balloon saying "puppet" certainly helps.

Oh, this ought to be a fun exercise! My mind is already roaming through characters trying to think of some likely candidates to have made Scipio's list. I'm betting a Legionnaire or two may make an appearance. G'Nort seems likes he might fit in here somewhere, but I can't quite put my finger on the unique dramatic purpose he serves. I just start thinking about him and I begin to chuckle a bit.

Dude. Will Arnett really needs to play Abra Kadabra in the movie.

My 3-year-old nephew discovered Abra Kadabra today in Super Friends, which he calls "my magazine". The Flash is his new favourite although he also likes the look of Blue Beetle and Wonder Woman's pony.

G'nort is easy: you want him when you need indestructible comic relief. Someone who can add humor to situations where any other possible clown would get blown to bits, but who doesn't control or subvert the underlying situation.

(I expect that all of the big JLA villains whose names end with the letter 'o' have a place in this category, by the way. At least the ones with a single-word name.)

Reading the lead up I thought you were going to say Mirror Master.

Maybe it's because my first Flash comic involved the Flash in a house of mirrors and his body kept on changing to match his reflection.

I am deeply envious of that mustache. I mean really, great villains need either great mustaches or no hair at all. (Not sure how I feel about bald guys with mustaches...)

I know this tends to be a Marvel-free zone, but when a new hero or team needs to defeat some mooks to prove their worth, just trot out The Wrecking Crew.

Whatever happened to Abra Kadabra? He showed up to help kill the worst series relaunch in recent memory, but was then conspicuously absent in Rogue's Revenge. I remember a one-off reference by Libra about how important he was to his plan, and then nothing.

TTWLAM: The DCU equivalent of the Wrecking Crew is the Royal Flush Gang.