The Size of Central City


The squaring of the circle?
Perpetual motion?
Retooling the Republican Party?

I scoff at these minor puzzles.

For I have achieved a working estimate of...

THE SIZE OF CENTRAL CITY.
One picture. One picture out of the zillions of pictures of the ridiculous geography of Central City has made this estimate possible. Here it is: 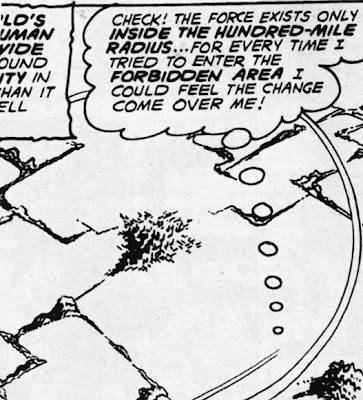 Note that Central City has no apparent rivers or roads transiting it. There is no escape from Central City, unless you can achieve escape velocity, like Flash.

Flash states that he's traveling at just outside a hundred mile radius from the center of the city (in fact, the point where Gorilla Grodd is standing-- but that's not important right now). Now, the perspective makes things a little tricky (in Central City, perspective is always a problem). But with a little measuring, I estimate that Central City is roughly a square whose diameter is 37.5 miles.

That would make Central City about 1406.7 square miles.

Let's put that in perspective.

When you exclude consolidated city-counties (which are just plain cheating, and a different animal entirely), the U.S. city with the largest land area is Oklahoma City (no big shock there), with 607 square miles. 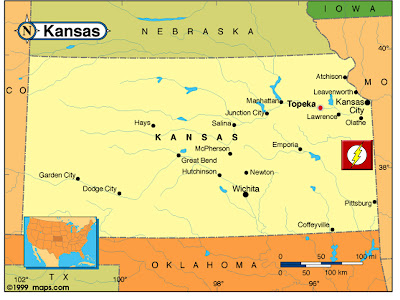 Kids; see if you can spot Central City!

Yes, that's the approximate size of Central City compared to the state of Kansas. Central City is the only city with a multi-story phone book.

So, how many people live in Central City? It's a toughie, but we'll guestimate it anyway. As mentioned, Central City is about 62 times larger than Manhattan. Let's start with that. Now, on the one hand, Central City seems to be full of nothing but ridiculously broad avenues, sidewalks and plazas (all the better to fight Rogues in). That would make it seem much less dense than Manhattan. BUT...

Manhattan's population is about 1.62 million. And Central City is 62 times larger than Manhattan. Ergo,

the estimated population of Central City is at least 100 million.

Central City has the equivalent of three Californias worth of citizens, or four Texases, or five New Yorks. No wonder Flash has trouble finding the Rogues!

Comparing Central City's population to country populations, Central City is just smaller than Mexico and just larger than the Phillipines. It's a good chunk heftier than Germany and Vietnam. And it's got France beat without breaking a sweat (not that that's particularly difficult).

The way West always talked made it sound like Central and Keystone City together were smaller than Dallas or even the greater Metro Denver area...

Thats really why we needed Barry back, no more endless speeches about small-town America.

Who knows how big those cities are in DC earth, though? I seem to remember in the JLA/Avengers crossover, the JLA noted that Marvel Earth was considerably smaller (also dirtier, and filled with desperation and hate) than the JLA's Earth--thus making room for all those extra cities.

So that's why they need all those Flashes.

Are there any Central City heroes besides speedsters?

One concept that is often explored is "Could Batman handle Metropolis/Superman handle Gotham?" I think a better question might be "Could any other hero protect Central City besides The Flash?"

Of course not; no other hero could even make it across town.

I love this. Central City is more than four times bigger than New York City taken all together. But I propose we take the population density of Chicago, not that of Manhattan, as the baseline. Part of why Central City is so huge geographically is because, like Chicago, it sits on the Great Plains, with vast flat empty space to spread out into. I can believe a man running faster than the speed of light, but can't believe the economics involved in getting Manhattanite densities when there's apparently completely empty space sitting right outside the city limits.

Chicago's density @ 1406 square miles still gives us a comically (so to speak) unreasonable population of 17 million, twice as many as New York City.

I just now figured out why I have "Kansas City" running through my head.

And after going back through the older posts, I realize I had the wrong song from the right show. *oops*

I was told there would be no math!

Well done, there! Now, with Keystone and Central being referred to as twins cities, can we assume KS is a biggie too? Or is that twin as in spreading out from opposite-but-equal spots on either side of the river?

Maybe it's similar to Doctor Who's Tardis with folded-in internal space or somethin'.

I think Keystone is like Kuato in "Total Recall", stunted conjoined twin that only makes itself known on occasion.

Which city is Howser then?

I'll bet that there are people who have lived in Central City their entire lives, without ever having seen the other side.

Given the picture upon which the calculations were based, there may very well be a river running through the urban area that is unseen because it is so far away from the camara.

Having personally driven through that section of Kansas where you put the graphic, I can attest that it could use a Central City. There's absolutely nothing there.

My theory is that Central City (as well as Keystone City) exists only in a pocket dimension which is tied directly to the Speed Force. The size of the pocket (and therefore the City itself) is directly tied to the speed vibrations (and dynamic personality) of whichever Flash exists there. So Central City contracted when Wally protected it, but now that Barry is back it will begin to expand again.

However, Oklahoma City has 3 interstates, two bypasses and a turnpike and it is the only city where during rushhour you can get a ticket for speeding (at 75 mph)

With some quick calculations, we can figure out that in episode 2 of the Flash series, Barry runs at a speed of 1,200 mph.