Pep 14: I think the blind guy nodded off 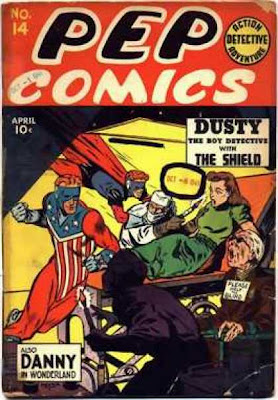 Okay, let's go down the Pep Cover checklist, shall we?

But, wow... helpless blind guy in wheelchair? Now that's over the top!
Posted by Scipio at 5:56 AM

Sheesh, Dusty IS flying in again. He seems to do that an awful lot.

As the battle is commencing, can't you jsut see that poor blind guy, sitting there and yelling "what, what?" the whole time.

If I know my Golden-Age comics, that "poor blind guy" turned out to be the fully-sighted mastermind of the whole criminal operation.

I love how he's actually got a sign that reads "Please Help, I'm Blind". Gotta love those Golden Age preconceptions of differently abled people being utterly helpless. Age the Doom Patrol's Chief thirty years and take away his sight and he'd still be one of the most dangerous people in the room for my money.

Of course, the sign could read "Please help THE blind" and the help he's asking for is of the economic variety, which is something you can still see on the streets every day.

And "Danny In Wonderland" sounds highly interesting to me.

"Danny in Wonderland where the Queen of the Fairies whisks Danny off to a magical land. In his first story, he manages to burn an evil giant to death. He has a dog named Snapper and acquires a dwarf named Kupkake as a companion."

Sounds like a great set-up for Vertigo Visions: Danny in Wonderland to me.

In a Dan Didio comic, Snapper would most probably eat Kupkake.