Ah, revisionism. Younger or newer readers often get snowed by the DC press machine into believing that a character has "always been a certain way". Many readers, for example, would assume that Alfred's always had a biting dry wit. Not so; that characterization began entirely with Frank Miller. In fact, for the entire Golden and Silver Age, Alfred was pretty witless. Read old comics, people; there's a lot to learn from them.

It's come to my attention through recent conversations about Flash: Rebirth that there are a lot of people whose idea of what Barry Allen was like has been formed entirely based on the saint-like reverence of him by modern characters. Based on that impression, they've been objecting to how Geoff Johns has portrayed Barry Allen in Flash Rebirth. Well, I have news for you; odds are Geoff Johns has read more Barry Allen stories than you have. Odds are, he's read all of them.

"This no time for anything but crimefighting attitude isn't like Barry Allen at all."
Really? 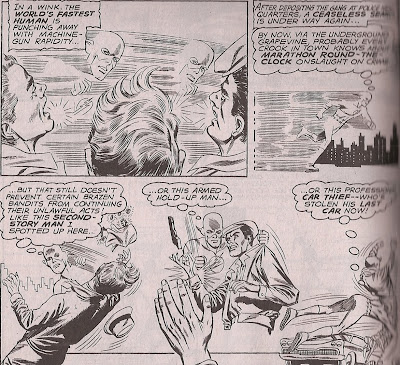 "Barry was never such a hard-ass."

Here's Barry, who's a police officer, pressuring a lawyer to violate attorney-client privilege. 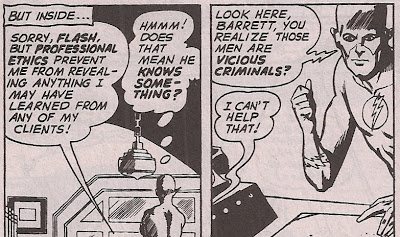 Here's Barry refusing to believe one of his foes has reformed, purely out of instinct, even though everyone else believes it. 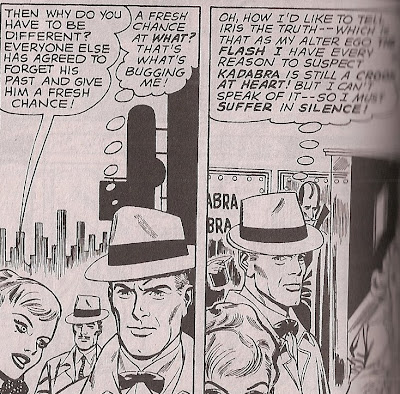 Naturally, he was right. But that's not really the point, is it?


"Barry was never so humorless."
Really?

Here's Barry using superspeed to begin to incinerate an opponent; and laughing about it. 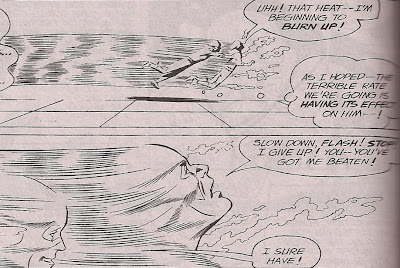 Look, I'm not saying Barry was a bad person. Of course he wasn't. Hey, I could easily post panels that show he enjoyed vacation with his friends, liked kittens, and was, in fact, a very good mentor to Wally.

But he was a rather serious policeman, with a no-nonsense approach to justice, and little inclination toward coddling crooks. Just because a character's stories are full of talking gorillas, giant insects, wacky villains, and absurd pseudo-science doesn't make the character a lighthearted jackanapes. In fact, Barry took all those goings-on deadly seriously. You may consider them crazy and funny in retrospect, but Barry Allen surely did not.

If you fact if you want a Flash who's fun, and light-hearted, and thinking all the wacky Silver Age is funny, well, then you want Wally West, not Barry Allen... .

P.S. Iris Allen was mean, and she and Barry were not the Most Perfect Couple Ever (tm). 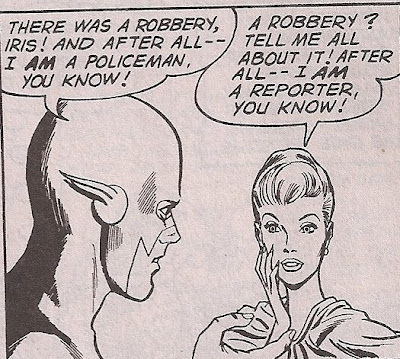 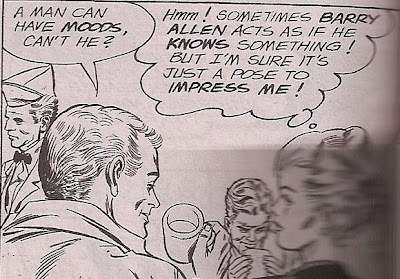 I always appreciate history lessons like this, especially when coupled with "photographic" evidence. I love that DC writers like Robinson and Johns stopped rewriting continuity long enough to inform their revisions with back issues rather than hearsay and presumption. Plus, I only read Barry Allen under Cary Bates, so I could really use the help myself.

Oh Barry definitely didn't believe in coddling. Frankly, I think he's going to be in for a rude surprise when he actually gets together with Bart and HIS attitude.

True. Barry also tended to flirt with the ladies in those early stories (though not nearly as outrageously as Hal Jordan did/does) -- so his bond with Iris wasn't as tunnel-visioned as everyone likes to think it is.

Barry was aboslutely a no-nonsense guy who was wholly dedicated/obssessed with crime-fighting. Sure he could let his hair down (metaphorically of course) when crime was in a lull, but that was just spare time behavior.

And there was no hero more capable of out-witting his foe than my man Barry.

I understand and respect the desire to go back to original stories, but bear in mind that the "Flash" comic was also chock full of material that I'm glad to improve upon. The Barry / Iris connection, for one, was never as good as when Mark Waid wrote it, years after Barry's death. In the original stories, immediately after the "Iris is dead, find her killer" arc ended, Barry was on the make again, with the hot flaming hot pants for his new next door neighbor Fiona Webb.

Now, whom do I want to read about: the guy who says "I've avenged you, Iris, now you can -- ayiyiyiyi! Who's that hot redhead?" or the guy who never really had room for anyone in his heart except Iris? Even if it requires serious retconning (and Geoff's just the man for the job), I take Bachelor Number Two.

Also: the Abracadabra thing is not compelling evidence of Barry's rigid belief that criminals never change. We're talking about Abracadabra here, a guy with serious issues who had tried to kill Barry on multiple occasions for not really good reasons. Barry would have to be dumb as a post to not be skeptical. He turned out to be right, didn't he?

And, it's dirty pool to make like Barry was burning Heat Wave to a crisp there -- as was so often the case in Silver Age comics, Barry didn't inflict any actual damage or even all that much pain (notice how Heat Wave is sufficiently undistressed to speak with perfect diction, even retaining enough pride to be reluctant to give up). Show me as much as a second-degree burn I'll concede the point, but "begin to incinerate" is less apt than "didn't come anywhere near to incinerating". In fact, show me a permanent injury anywhere -- Eobard Thawne that one time being the one noteworthy exception -- or else Barry didn't hurt his enemies.

I guess we can forget about all of the issues where Barry worked with the villains? ...or put faith in the idea that vilain X had cleaned up his act? ...or all the issues where he himself committed morally ambiguous acts? or all of the timelines he changed over the course of his run with no thought of the ramifications? That black and white Barry? :P I could scan art all day but in the end neither the fans that believe Flash was dark and brooding on matters of justice nor the fans that think the current characterization is newly invented have any say in his trajectory.

D'you get the sense that the Silver Age writers were endlessly trying for a Howard Hawks kind of vibe between their romantic couples, but never got the affection underneath the vicious banter to come out quite right (except in the case of the Elongated Man and Sue)?

Barry believed Al Desmond had reformed, despite his erratic behaviour that would have suggested to the contrary. He believed when Heat Wave reformed, even letting him stay at his apartment.

Not saying your points are wrong, because those scenes obviously did happen. But I think you're presenting a slightly limited picture.

However, Iris was totally nasty in the Silver Age, there's no denying that. I didn't like her until the '70s issues.

What we all may be discovering here is: Silver Age Barry and Bronze Age Barry were very different characters...

If I had a scanner, I could prove Barry Allen was a big fan of the Acid Rock of Jefferson Airplane. Nonetheless,"Flash: Rebirth" is a very ordinary modern comic book- pages of talking heads and brutal violence. The art is poor man's Perez, into the bargain.

Yes, Wally is the flash I want. In fact, I think EVERYONE (even if they don't presently don't know it) wants JLAnimated Wally as the Flash.

I most ABSOLUTELY don't want Wally as Flash. Never did. (Liked him as Kid-Flash alot, moreso during the New Teen Titans era.)

(1) Scipio provides a limited view based on scant evidence. A character who spans the intentional blandness of the 1950s, through the radical 60s and turbulent 70s, into the compromised 80s is going to see changes in how his personality is portrayed. What was normal in 1959 might look uncommonly rigid in 1985 or 2009.

(2) Yes, the Bronze Age Barry is different from Silver Age Barry. But every reader of those times knows that DC PURPOSEFULLY "greyed" up its heroes--from Superman on down to one degree or another--around 1970 to better compete with Marvel.

(3) Please do not confuse Barry's seriousness with being "dark" or "humorless." Barry wasn't a jokester, but he was about no more humorless than Clark Kent, Bruce Wayne, Diana Prince, Hal Jordan, Arthur Curry, or any other headlining DC character of his day. The best word to describe Barry is "straight-laced." Which was the norm before Stan Lee changed the game.

(4) You read it here first. DC now has its own Steve Rogers. Barry is the new Steve--a man out of his own time, serious, heroic, classic. This should be a lot of fun.

How about "Barry was boring?"
That aspect of his character has always been consistent.

I never cared about speed as a power, or as I like to call it, "Runs-Fast-Man." That's why the personalities of individual speedsters are very important to whether I can enjoy/tolerate them. Wally, except when at his jerky best/worst, could never hold my interest. However, when I decided to read up on Bronze Age adventures of Hal Jordan and Barry Allen in the mid-90s, I was surprised to find I hated Hal and liked Barry. Allen's a good guy with a solid presence, and certainly not boring.

I think Barry Allen was a bit more dedicated to friends and family throughout his entire run (even up thru Final Crisis) than Rebirth seems to portray...

The scans you've used to refute the idea that Barry is out of character in Rebirth - aren't almost all of them from one Abra Kadabra storyline?? Maybe he was having a bad day - or just has it out for AK? :P

Ah, revisionism. Younger or newer readers often get snowed by the DC press machine into believing that a character has "always been a certain way".

DC isn't the only culprit of that. Marvel, too. One day they decided to ignore 40-odd years of established characterization and turn Tony Stark into a jerk; now so many adolescent fans who weaned on Grand Theft Auto are happy to believe he's always been that way.

Three of them are from a Kadabra story; the others are each from other stories.

I believe I recognize the laywer panels; wasn't that from the story where Mirror Master impersonated four other Flash villains?

Not really accurate; you've cherry-picked a few out-of-context panels to refute the arguments but I'll let you in on a secret; I've read all Barry's stories too, and Johns absolutely IS changing Barry's personality. Case in point: Barry Allen was NEVER a "police officer" as you claim, he was a police scientist (big difference)...that's some revisionism right there.