"The Dead Yet Live!"

Yesterday, I saw someone on line I hadn't seen in quite some time, so long that I thought he might have moved or some such.

Jokingly, I sent him an initial message that said only,

"The dead yet live!"
Naturally, I was certain he'd understand what I meant, that he had been "socially dead" but was in fact was still very much around.

But he didn't, and replied with a stunned "Huh?". I quickly explained what I mean, and the conversation continued from there, no harm, no foul.

Later, however, I was left wondering how he could not have gotten the reference, which is obviously some deep-seated phrase from, say, the Bible, ancient poetry, or some great work of English literature. I mean, it felt so commonplace to me that it had to come from such a universally familiar source.

It bugged me enough that I finally looked up the phrase to find out that it's apparent source wasn't quite as "universal" as I'd assumed: Oh, the phrase must have surely appeared in some other book before this, but nevertheless, this was unquestionable where'd I'd gotten it, since I remember buying this book when published.

Yes, I was quoting a comic book cover (and a rather hokey one, at that), without realizing it, as if it were the Bible. Having done it knowingly might have been marginally cool; being intentionally geeky has it charms. But being so geeky as to have no idea when you're being geeky? Substantially less charming.

I might take some small comfort in knowing I'm not the only one of us who's made this kind of faux pas. Have you ever unwittingly made a comic reference that met with confused silence from the audience, and then later realized with chagrin exactly what had happened?

Dazzler's Dad & Mom: Tom Selleck & Caroline Rhea, because they not only look the part, they're as whiny as Dazzler is.

Doctor Doom: Let's see, Doctor Doom is a vain, preening old queen, who, like most leather queens, uses gear as an exo-skeleton for his sagging self-worth and masculinity. I guess the guy who played him in the FF movie will do just fine.

Enchantress: Shannon Dougherty is pretty much the only choice, isn't she?

Galactus: Ben Stein. If you need someone to look down on people as insects, who better? Besides, he's got the perfect voice for it. In your best Ben Stein voice, read the following and tell me I'm wrong:

Replace the name 'Galactus' with the name 'Ben Stein', and it reads even better. Ben Stein was born to play Galactus. 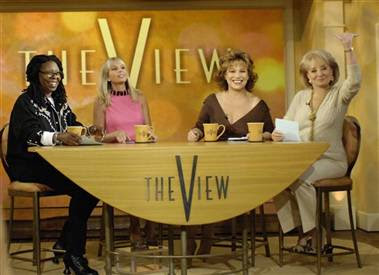 Which one is which, I leave to your imaginings.
Johnny Guitar & Doctor Sax: Hm. A guy who can ruin things with his guitar and one whose sax playing makes you want to commit suicide. Kurt Cobain and Kenny G would have been the logical choices, but I can't see that happening. Let's try Steve Zahn (because he does with his performance what Johnny does with a guitar) and Morgan Freeman (because every time he opens his mouth, it makes me want to commit suicide, and besides, federal law requires him to be in all major motion pictures at this point).


P.S. YES, I know they made a Dazzler movie within the comics. If you think that will stop from Marvel Entertainment from doing it in the real world, I have just two words for you: Ghost Rider.
Posted by Scipio at 11:58 AM 10 comments:

Dazzler was the most demanding aerobics instructor at Lesbianworth, the Penitentiary for Costumed Women. 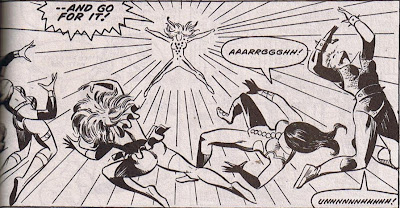 Poor Dazzler. Just like the Martian Manhunter, one of the reasons she never stood a chance is because she had such a pathetic rogues gallery.
Sebastian Shaw & His *snort* Hellfire Club.

You know those snotty rich kids at suburban schools who like to pretend they're all urban and tough, while wearing expensive designer tough guy clothes, and wind up going to, say, Bowdoin? Give them superpowers and you've got the *snort* Hellfire Club.

They send some sort of goons in Mandroid armor after Dazzler. Naturally, the Dazzler kicks their butts, saying (as only a Marvel character could)...
"Chuckles, I had one dy-no-mite debut goin', till you jokers crashed the gate. Now it's ruined. And for that, sucker, you gonna pay!"

Anyone want to guess why Dazzler, of all people, talks like Luke Cage? My guess is because she's a snotty rich kid from a suburban school who likes to pretend she's all urban and tough while wearing expensive designer tough guy clothes.

Then she defeats them all over again next issue to save the X-Men. In the words of Claremont:
She creates a lightshow so intense and beautiful that the guards minds can't cope with it! In other words... they're dazzled!

How easy is it to defeat perpetual loser Spider-Man? She flashes him once with her disco ball and he's overcome. Later, of course, they team to defeat the Lightmaster. 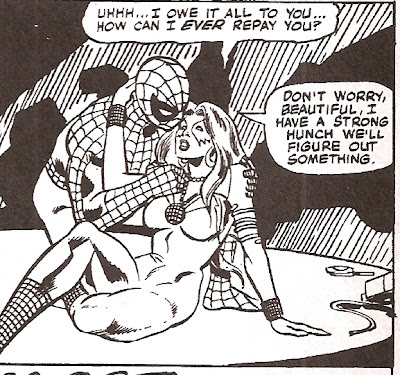 Spider-Man is one guy you really don't want to owe... 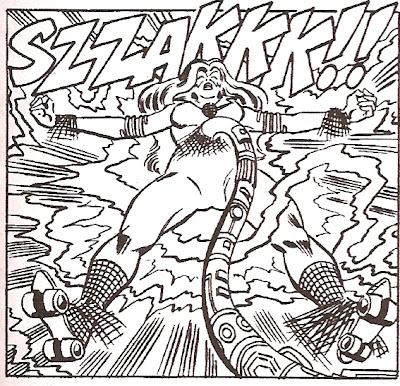 Beware, ladies, of lonely science nerds who still live at home and like to cosplay. I mean, unless you like it freaky.

Enchantress is kind of like Endorra, but without any sense of style, humor, or eloquence. In other words, Witchiepoo. She's kind of a recurring foe for Dazzler (to the degree that a character with a title as short-lived as Dazzler can have a recurring foe). 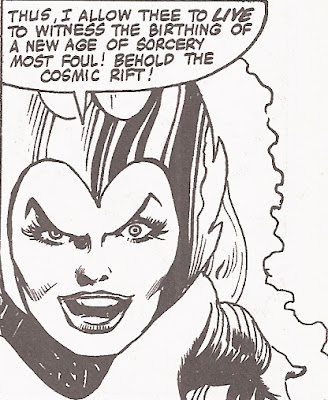 I can think of very few things I'd rather witness less than Enchantress birthing anything through her cosmic rift.

Naturally, Dazzler kicks her patootie, both physically and in a singing contest on Asgard. Personally, I think it's her "OH!" face that won it for her (hey, maybe you really can put mirrors on benoit balls!). 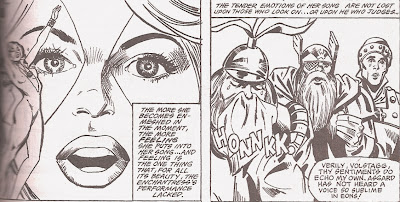 Odin hath been now awaiting Satellite XM for nigh onto a fortnight!

This guy's a tin-plated dictator (literally) of some Speckostan in Europe; it's like Ruuman Havjarti and Iron Man had a baby together. Doom is kind of like Doctor Domino, but without any sense of style, humor, or eloquence. He tries to get her to fetch him some jewels, because

(1). He's a vain, preening old queen
(2). That cloaked hood combo he sports is just crying out for a decent brooch.

Anyway, the Dazzler knocks this loser six ways to Sunday more times than I can count.

If Dazzler is Batgirl, Dr. Doom is her Killer Moth. No wonder this guy never appeared anywhere else. I mean, really, with villains this lame, Dazzler never stood a chance at being popular.

The Klaw, Hulk, and She-Hulk

She kills Klaws. Literally. When your only weapon is sound, you probably don't want to fight... The Dazzler. And Dazzler defeats not one, but two victims of radiation poisoning. Go for it, Dazz! What's that? They're supposed to be heroes, not villains? For pity's sake, give me a break; this is Marvel, how am I supposed to be tell the difference? 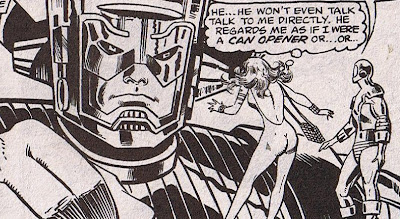 I don't understand it either, Dazz; I mean, a can opener is useful...! Still, it's nice to know I'm not the only one who thinks you're a tool.

Besides, given that Galactus looks like a giant bottle opener, it may be a compliment. Dazzler, by the way, doesn't actually defeat Galactus, but she certain gives him a stern talking to.

After Taking Over the Spirit Squad, Manny Confronts Emma About Her Bulemia 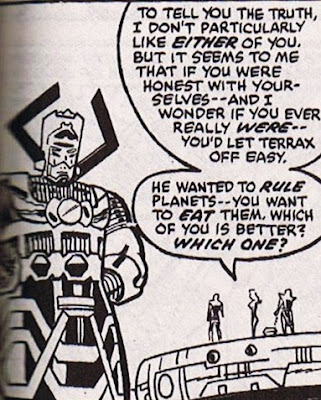 Dissed by the Dazz! Galactus cried for hours after this. 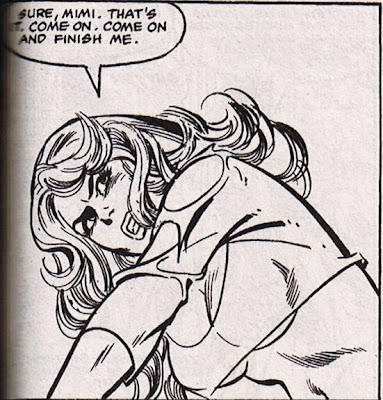 Dazzler fights someone named, I kid you not, the Absorbing Man, who's pretty much Amazing Man, only white and really really stupid.

She spends one night -- ONE NIGHT-- in prison, where is attacked by a costumed quartet of S&M/B&D dykes (Titania, Letha, Poundcakes, & Screaming Mimi; no, really!). It's six pages of the most gratuitous "titillating prison chick-on-chick violence" imaginable.

And, yes, it's just another scene where Dazzler faces a sound-based villain (Mimi, in case you didn't know). Can you guess how that turns out?

Dazzler's only serious recurring foes are, of course, her Dad and her Mom. And many of her villains are just stand-ins for them, and battles against them become replays of Dazzler trying to win battles against her parents. Kind of like how husbands and wives are used in real life.

But it goes without saying that the real stars of Dazzler's Rogues Gallery are: 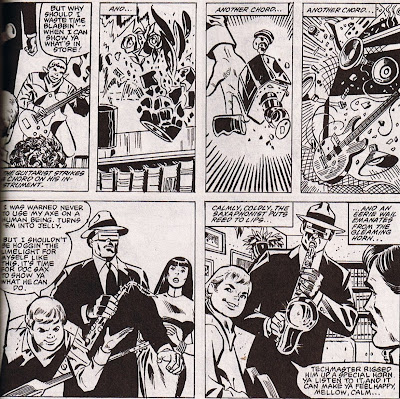 I mean, who needs any other villains when you've got them?