I bet you've never read Wild Dog.  Well, I waited long enough now that I can convince myself that I actually READ Wild Dog when it came out in 1987. Mental self-retcons are quite useful! Given enough time, I could convince myself I WROTE it, and simply forgot.

But of course I didn't read it at the time.  At the time, Wild Dog was billed as 'grim and gritty' realism, before that phrase had even been coined.  In a world of superpowered do-gooders, Wild Dog was a Reg'lar Joe (who'd inherited a fortune, of course) who simply armed himself with all the last personal combat tech to make himself a one-man SWAT Team.

This was the immediate post-Crisis world for the DCU.  On the one hand, they had just cleared the decks of (what they considered) 50 years of continuity baggage, liberating them to reorganize a bright and shiny new DCU.

On the other, 1987 was NOT in the mood for 'bright and shiny', given that Watchmen and The Dark Knight Returns were tearing up the sales charts at the time and .  Those were difficult competing impulses to balance and I think Wild Dog was, knowingly or not, an attempt at doing so.

1. Wild Dog was a mini-series.

Yeah, I can't even pretend I knew that.  I had assumed it was just one of those many series they slap up on the wall until it slides off. But it was just a four(!)-issue mini-series. After that, Wild Dog appeared as one of the back-up series in Action Comics (which during that period was an anthological title), in which he got three story arcs. Then there was a one-shot special and.... that was it.  No more Wild Dog, except as one of those odd objects in the attic that DC will let writers trot as decor or a prop in some broader story.

At first glance, this is EXTREMELY ODD. One doesn't expect a series about a shoot-'em-up vigilante character still remembered 35 years later as uncompromisingly violence-happy to be a mystery.  That's a different genre.  But DC's roots are in pulp stories, after all, where detectives and masked death-dealing vigilantes not only rubbed padded shoulders but were often one and the same.

It also helps to know that Wild Dog author Max Allan Collins was primarily a well-known and prolific mystery novelist, like Kaye Daye.

So it should never come as a surprise that something MAC is writing should turn out to be a mystery.  What is surprising is that Wild Dog didn't solve the mystery; Wild Dog was the mystery. No one, including the reader, knows who Wild Dog actually IS until the fourth-and-final issue.

There are four college friends who are the 'suspects':

This is actually the explanation for one aspect Wild Dog's costume design: unlike almost every other comic book hero, Wild Dog's costume covers ALL his skin (with his eye slits showing only The Whites of His Eyes) That's because one of the suspects (the reporter) was African-American and any visible skin would either eliminate or confirm him as Wild Dog.

On the one hand, I intend that the highest compliment, because I'm not usually amused by most comic books' attempts at humor.

On the other hand, it's a pretty severe defect in characterization when OUT of costume, the character was consistently called painfully, quiet, shy, and serious.

This might have been passed off as a "Peter Parker's Spider-patter" situation, but there is no evidence that there was any audience for Wild Dog's deadpan black humor except US. The above is perfect example; that's not Wild Dog smack-talking foes to keep them off-balance à la Spider-Man, it's just dry wit that the character can't repress.
This is an aspect of character that CW nailed, not only with their writing but the casting of naturally funny Rick Gonzalez as Wild Dog.

Max Allan Collins is a huge fan of hard-boiled gumshoe lit and was a long-time writer of the Dick Tracy comic strip. I read his run devotedly; I still remember his Haf-and-Haf and Angeltop storylines very fondly.
Dick Tracy is (still) known for his shoot-first and don't-ask-any-questions at all style, where villains die horrible Tracy-adjacent deaths.  Making MAC the perfect person to have created Wild Dog.

Wild Dog may have been funny, but he wasn't nice or gentle.  This is not "your friendly neighborhood Wild Dog."

Wild Code didn't have a Code Against Killing; he had an Imperative Toward It.  Wild Dog had zero compunctions about killing The Bad Guys as a last resort. 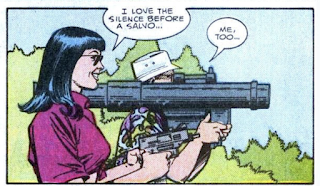 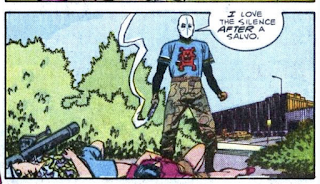 5. Wild Dog looks bad. No offense intended to Terry Beatty, who I'm sure is a perfectly nice person. But his art (at least herein) falls squarely in the uncanny valley.

For some reason I don't know there was a LOT of that phenomenon in that era, even as late as the beginning of the Sandman series in 1993 (which looks way worse than you remember). Beatty's art looks like a newspaper comic strip more than a comic book--which since he is a newpaper comic strip artist shouldn't be surprising.

There are genres that would be more forgiving of Beatty's style. But an action-packed vigilante story isn't one of them.

6. Wild Dog lived basically in same town The Music Man is set it.

I have always have a vague memory that Wild Dog lived in an area called "Quad Cities".  But as an inveterate and resolute East Coast snob, I never had any idea that the "Quad Cities" was REAL.  It never even occurred to me.  I mean, "The Quad Cities" is obviously a made-up name for a comic book fictionopolis.  But... it isn't. It's a real place. 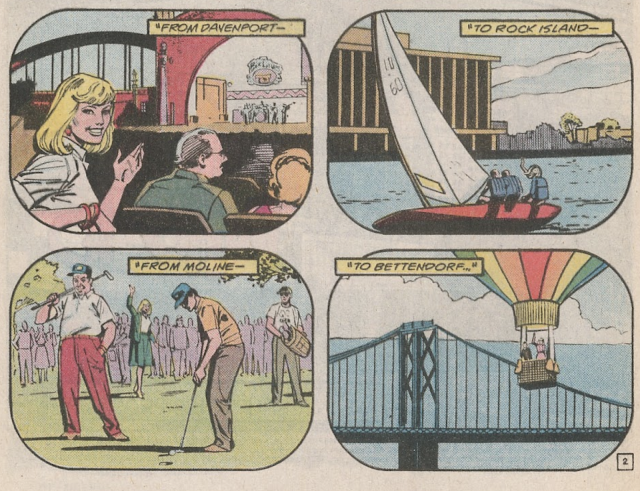 The ignorance is all on me.  Collins strongly based the series on local fixtures like the RiverCenter where Wild Dog makes his debut. 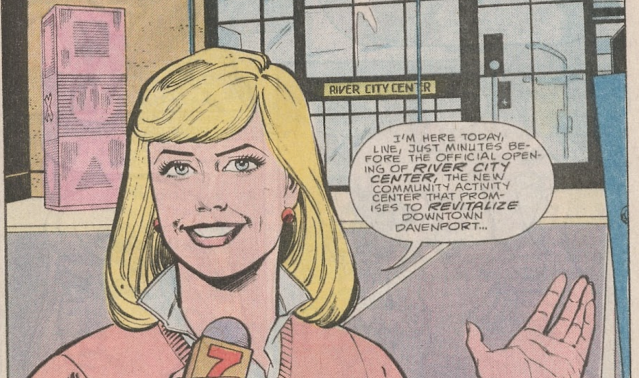 In fact, I don't think ANY DC comic has ever been more strongly rooted in a real-world city as Wild Dog was in these "Quad Cities".  It's where Max Allan Collins grew up and he was obviously determined to put it on the DCU map

"River City", the setting for The Music Man, is fictional, but many references internal to the show make it clear that it's meant to be in this exact area. So Wild Dog shows you what happens when you are not aware of the caliber of disaster indicated by the presence of pool table in your community.  Weirdly, "River City" (which we're just going to assume is part of the Quad Cities in the DCU) is home to one OTHER hero in the DCU.

When DC asks me to write the next Wild Dog miniseries (with MAC's blessing, of course!), I guarantee Odd-Man will be part of it, either as WD's wacky sidekick or as his clean-cut (but crazy) rival. Possibly both.

8.  He inherited many millions of dollars when his wife, the secret scion of a Mafia family, was murdered by family rivals.
All of Wild Dog's money comes from crime, giving him extra impetus to use it to fight crime.  It's actually fairly unique; it's like he's the Huntress's widower.
9. Wild Dog drove a red pick-up truck named "Rover", which is hilariously on point.
10.  Art-style notwithstanding, Wild Dog's improvised costume is CRAZY-ICONIC.

The story is that Wild Dog sprung into action when he saw a terrorist attack live on TV, and had to grab whatever he had handy as a disguise, including the mascot shirt from his college football team. The logo and look perfectly capture his essence. Violent but laughing, cartoony but vicious.  The mismatch between the various part of his costume aren't a flaw, they're a feature, and it's what makes it work.
11. Wild Dog was freakin' hilarious.

All of this lead me to a personal literary theory about Wild Dog, which I'll go into in my next post...

Other than Batman, the only member of the Mystery Analysts anyone remembers is Kaye Daye. I bet even Mark Waid doesn't remember the others.

Why don't THEY have a television show?! Rotating cast of Batman-adjacent mystery-solvers in an anthology show? It writes itself.

I remember that era of comics. I remember the full-page adds for Wild Dog that were supposed to entice us. I remember getting a sense from the ads that this was more of DC shaking things up just to shake them up, and not to apply any rhyme or reason. I flipped through issue one at the comic book store and felt that my guesses were confirmed: in the bold new Post Crisis world, everything was to be the opposite of the Pre-Crisis landscape. Heroes didn't previously kill without a very good reason? Well by golly this new hero will kill ESPECIALLY without a good reason. Previous heroes tried to dress such that they might be taken seriously? Well Wild Dog will dress in a goofy shirt just because.

If there was an audience for Wild Dog, I sure wasn't it.

That was my feeling at the time, although I doubt I would have been able to articulate as well, at the time, as you just did now. However, having read the genesis of how the miniseries actually came to be, I think it was much less calculated than you'd expect.

The most surprising thing is when I found out that I was wild dog.

It surprised me, too.