Go West: And the rest!

With the Classical Western trinity (Vigilante, Blackhawk, and The Trigger Twins) and the Revisionist Western trinity (Jonah Hex, El Diablo, Brian "Scalphunter" Savage) in the first two slots or our proposed Western anthology comic, what goes in the third slot??!?

The answer: everything else.

After over 80 years of producing characters (and gobbling up the characters of other companies), DC's two great strengths are the recognizability of its iconic characters and the bench strength of all the others. I daresay DC could (if they could afford to ignore sales), simply write one story for all their existing characters with no repeats and still have enough of them to produce comics for the next 80 years ("Tubby Watts, the Terror of 2062!")

I telegraphed this answer in my previous post when I pointed out that DC often tries to make characters bear too much weight too quickly.  That's not the fault of the characters; it's a basic addictive behavior on the publisher's part.  If Squirrelman is popular, why, then they will publish Squirrelman Family, the Fanged and the Furry, Treetop Nights, World's Nuttiest, and his cousin will have a television show as will his butler and his police contact. Essentially, they will pile on ANY working wagon until it breaks.

The very concept of an anthology title accepts the fact that none of the characters within can sustain their own monthly adventures, but that readers do have a taste for the kind of stories they appear in. As I never tired of reminding modern readers (because they never remember it), the Justice Society was an anthology title. That's why all those heroes were in the same book, not because they worked together. They NEVER worked together. They worked on separate aspects of the same problem, in sub-stories drawn and written by completely different creative teams.  As a result, they are still around as viable IP today.

Most of the following characters could have an organic connection to one of the six main Western characters listed above, simply by appearing as guests in one of their stories. 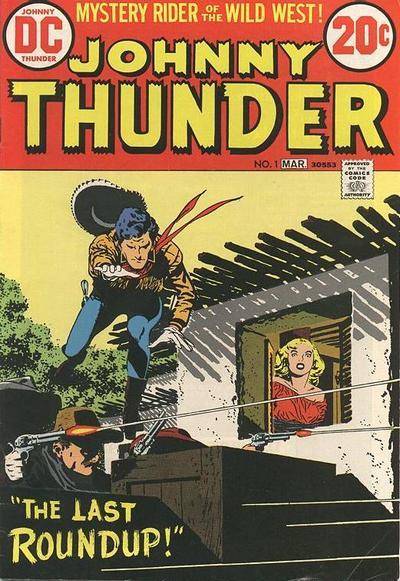 I honestly can't even remember whether the Western Johnny Thunder is supposed to be connected to the Justice Society Johnny Thunder, but it's required by the Laws of Character Names.  Johnny Thunder seems like a "Tales of" kind of feature, still set in the old west, perhaps something that a contemporary character is reading. Maybe there's still an in-universe "Johnny Thunder" comic book and he's THEIR classic Western hero!

As for his partner, Jeanne Walker, photographer and Old West Robin Hood Madame .44, she seems like she'd be better off as modern character. I mean, can you imagine trying to keep that outfit white in the Old West?

He's a difficult one, because he's out of date even in the Old West: Tomahawk is a character from the American Revolution. He was a U.S. soldier and frontiersman familiar with native culture and methods. Tom "Tomahawk" Haukins had his own comic for 140 issues, so it seems a shame to waste that history.  Plenty of ways to update him.  "Tomahawk" is actually a real surname, which solves the name issue, or he could still be Tom Haukins.  He could be a soldier, still; or he could be an anthropology, an expert on native cultures.  Maybe he never gets a story of his own; maybe he's just a consultant who reliable shows up in anyone else's story who needs it.

To me the clues on what to do are built into his bio. The early setting of Tomahawk stories; the fact that he has several names (Tom Hawks, Tom Haukins, Tom Hawkins); his long-running series; the "Son of Tomahawk" series. Tomahawk isn't a person: it's a role; It's a dynasty.  Some member of the Haukins Family is ALWAYS there in the background of somebody else's story. They are helpers, the sidekicks, the redshirts, the consultants; not everyone is a headliner, you know. 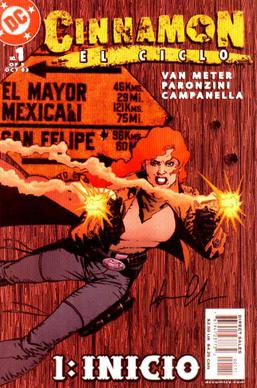 The original one was a past life of Hawkgirl, if you believe in that sort of thing. Whatever you wind up doing with an updated Blackhawk, Cinnamon would be a natural offshoot.

He uses a magic rock to become a part-time superman-cosplaying-as-a-minotaur; what's not to like? An obvious guest-star in a Brian Savage or El Diablo story.

The Sherlock Holmes of the Old West (which could be updated to now, as an ace sleuth with Western/native expertise).  Easily introduced as a guest-star in a Trigger Twins or Matt Savage story.

Comics have always been inordinately fascinated by people with "red" hair, simply due to the power of the limited inking process.  Firehair was yet another White Boy Raised By Indians (not to be confused with the FEMALE one, which is a different company). Luckily, he was born too early to be rescued by Ollie Queen.   He has a historical connection to El Diablo. Maybe... he's El Diablo's kid sidekick?

Yeah, I said it.  Having Bat Lash show up as Guest Star in a back-up story once in a while wouldn't cause the end of DC-Western Civilization.

There are others. Slow-Go Smith (either the live one OR the zombie one).  Tobias Manning (because what is the point of having a Western anthology title if you don't use the terrible Terra-Man!?).  Any of Clark Kent's adopted frontier ancestors. Jaime "Blue Beetle" Reyes, who, frankly, has a pretty clear calendar (until his movie comes out) and who lives in the Southwest. Frankly, I can't think of any DC Western character who wouldn't be a welcome guest in the back-up spot of its Western anthology title.

The real point is not the details, but the synergy.  I'm applying this theory to the Westernverse,  but you could do the same to DC's space properties, its mystical ones, etc.  I mean, what was "Vertigo" if not a very fancy presentation of DC's horrorverse in synergy?  People don't read things like 52 and Countdown and the Crises and crossovers for whatever elaborate mystery the writer thinks they've crafted or world-destroying story we know isn't going to stick.  They aren't interested in world-destroying, they're interested in world-building.  Almost no one who read it when it came out can recount the plot of Crisis on Infinite Earths because it was gibberish. Almost EVERYONE remembers seeing some unfamiliar or forgotten character and thinking "well, who is THAT now, I want to know what THAT's about!" Anthology titles should take advantage every month of the excitement that sort of energy such synergy can generate: "THIS is your gateway to this part of our multiverse."

Now, I wonder: are there any Western characters we'd really like to see but don't exist yet? I know DC has a venerable stable of existing characters and we shouldn't be creating characters all willy-nilly, but what niches are missing?

There were a lot of black people in the West and they are completely unrepresented in comics. I'm a big fan of "Have Gun - Will Travel", and for a while I've wanted to see a sequel series: Paladin's successor would be a black man and an actual lawyer, who feels that the West could avoid the sins of the East if the law can properly take root. I wonder if DC would be a place for something like that, even if it's not tied to HGWT except in terms of feel? Representation matters, and representation + good stories = a significant positive.

"are there any Western characters we'd really like to see but don't exist yet?"

Now THAT is an interesting question.
I believe you have just posited a scenario under which I would accept a new Wyoming Kid.

Hey, cool, there was (apparently) a Cinnamon mini in 2003! I, uh, really like Cinnamon.

"Past life of Hawkgirl." Aaaand there's the only four words in the English language that could make me not care.

Also I had a hunch Bat-Lash was returning in this series. Even if the original is too meta for Scipio one can always use a good says-what-the-audience-is-thinking comic relief character in any Western.

I'm the odd person out, I know, but I wouldn't mind if Tomahawk was left as a pre-Revolutionary/Revolutionary War character. Frontier stories can be pretty good.

Isn't there any market for historical comics at all? Could a bi-monthly anthology along the lines of the original The Brave & the Bold - featuring characters like the Golden Gladiator, the Silent Knight, and Viking Prince - make some cash for DC? There seems to be a small, but loyal, market for historical manga - Lone Wolf and Cub, Blade of the Immortal, Berserk. From things I've seen on Twitter, there also seems to be an audience for the historical bande dessinee that Cinebook and others put out. Seems like Warner/DC could find some way to get a slice of that pie.