Haikuesday in the Shipping Room

You know, there is SO much to J'onn J'onzz and Apex City, so many repeated themes --the meteors, the fires, the spinning, the ice cream cones, the falling safes and planes, the flocking and the statues, the finger snapping, the vibrating, the blowing, etc.-- that's it's hard to imagine a panel, or even a PAGE, that could get it all in. Not even if George Perez drew it (and that's a challenge to all your artists out there).

J'onn (like God, whom he symbolizes) and Apex (like the Universe, which it symbolizes) cannot be comprehended all at once by the human mind. It would, like, violate the Turing Principle, or some such.  Understanding of them can only be approached asymptotically from the slow accumulation of details, from the cumulative effect of a thousand different panels, each of them like the facet of a cubist painting, or as in one of those portraits composed of photos of other things. 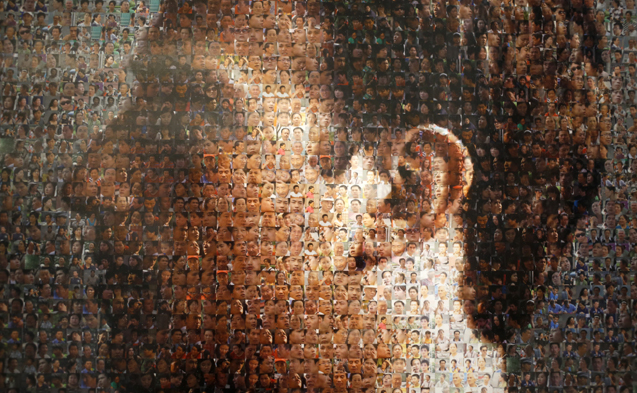 The Martian Manhunter is perhaps less an actual character than a meta-character, an ever-changing synthesis of all that is alien to us, all that we do not understand.  J'onn has been portrayed as 'the one-man Justice League' for some time, but that is all part of his disguise, since he's more like a one-man Doom Patrol.

That said, there are some panels that contain more of JJ's essence than others, and this is certainly one:


The invisibility silhouette. The falling safe. The floating flamethrower. J'onn's exclamation.  The counterbalancing of yellow, blue, red, black, and white.  This panel is a masterpiece of comic book art.

AND of comic book PROSE, if you read all the words: 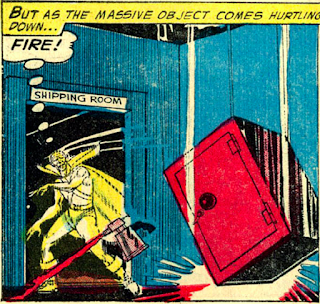 BUT AS THE MASSIVE


You might charge that I'm 'cheating' in perceiving this haiku, because it's not entirely 'spoken'.  Well...NONE of the words are 'spoken'; they are all written. You, the reader, are the one making that distinction, in your own mind.  They are all just words on a page, you know...

What haiku can you compose about this panel, the Martian Manhunter, or the phenomenon of compositional character comprehension?
Posted by Scipio at 2:00 AM

While no haiku,
Funny you should mention the
Doom Patrol, because...

I've often thought that J'Onn and Robotman should've switched teams. Cliff Steele is basically a reboot of Robert Crane, like the Silver Age Green Lantern and Flash reboots, while J'Onn could have been divided into the physically-powered Manhunter and the mentally-powered human Mento who moonlights as a crimelord (like Marco Xavier). Add in adopting a green-skinned kid who can change his shape, and I can't help but wonder if Niles Caulder changed his name from Mark Erdel...

The ne plus ultra
of the Martian Manhunter
is Gardner Fox's.

Haikus are better
With ice cream, safes, and fire
So, thank you, J'onn J'onzz.

Heh; even if it isn't, Bryan "Now J'onn J'onzz must spin" works just as well.

However, there's a
Solar System model in
Nevada; see link:

The planets are lights,
yet no Mothcopter is seen.
Apex for the win.

You know what, I'm starting to question whether is legit. Otherwise why can't I do this:

That's weird, every time I put "shipping room" in that post, it disappeared.

The actual cheats
Are miscounting syllables
of 'hurtling' and 'fire'