When last we left Gayland, the Red Devils, having rendered our brave bowmen unconscious, load them into the human-cannon as human cannonballs to launch them at... well, see for yourself.

So.  Star City has an amusement park named Gayland. Which features a "House of Swords" topped with upraised spikes with an adjacent crocodile pen. Star City must have an unusually large Cenobite population is all I can figure.


Jeez, and I thought Star Citizens were just stupid; apparently they are freaky as heck. Which reminds me, Ollie is fulfilling his greatest fantasy:

For most heroes, suddenly waking up to find yourself being fired from a cannon would be disorienting. But Green Arrow is promethean in his foresight: "Surely, at some point I'll be knocked unconscious and hurled into the sky simply as the natural result of my own incompetence and foolhardy bravado, so I'm going to practice that by putting a CATAPULT in my car and shooting myself into oblivion as often as logistically possible."

Sure enough, Ollie's mithridatean preparations have paid off so that he can not only calmly consider his circumstances with wonder, but take a moment to appreciate his surroundings (because, after all, he does this every day):

BTW, extra points to any commenter who can explain what on earth a "House of Swords" is and what OTHER purpose it might serve at Gayland than allowing Ollie at this very moment to free his hands so that he can do this:

Having escaped The Death Trap, genre-savvy Ollie knows it's time to start wrapping things up. He and the Nervy Kid quickly find and capture the Red Devils who had previously proven insuperable:

Yes; "wow", indeed, Circus Joe.  Anyway, Ollie decides to impersonate one of the Red Devils (since it worked so well last time).

Naturally, one of the supposed potential Victims was the mastermind, because, well, it's a Golden Age story and that's always what happens.


In the end, it turns out to be a Scooby-Doo real estate plot (which is why we started this series with Scooby-Doo's crossover with Green Arrow, ha hah!).


And finally, as always, Ollie and his roommate add an item to their Armoire of Trophies. 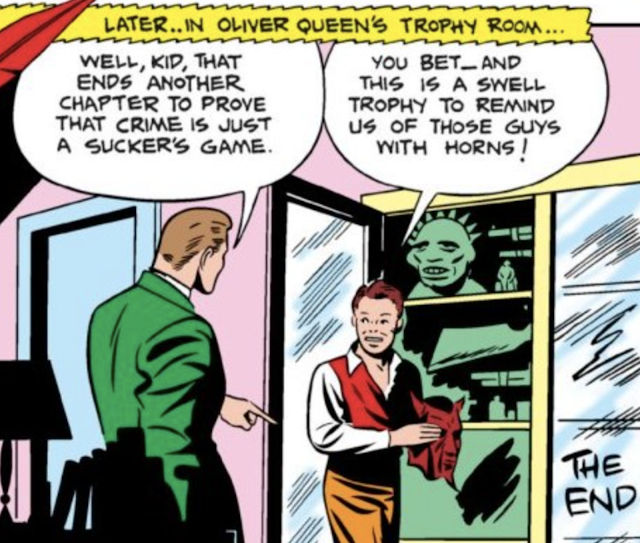 House of Swords ... well, umm, huh ... okay, Star City has an enormous pigeon problem, and by that I mean the pigeons are also enormous as is the problem they cause, so the swords prevent the extra-large pigeons from roosting above the crocodile pit, because ... well, let's just say the pigeon problem was so forcefully resolved that starlings moved in en masse, and the city was renamed Starling City in time for the new Arrow series.

What? It works just as well as stitching arrows.

It's okay. I've come to terms with not receiving extra points.

It's a shame the Sun isn't out, so we could see how polished the swords are. Because right now, my best guess (after a web search tried to convince me that Kevin Spacey was involved, no matter how many quotation marks were involved...) is that it must be like a House of Mirrors, but more phallic and carrying more of an incentive to by commemorative band-aids in the gift shop. Don't forget to buy a small child before exiting to the alligator pen, if you didn't bring one of your own!

As for Circus Joe, it serves him right. Everybody knows he was a hack and stole all his good material from Carnival Camilo, anyway. Whoa, hang on...Incoherent crime. Interested in an amusement park that's clearly not amusing. Dangerous attractions. Purple suit. Green hat. Circus idiots with banal codenames. Harlan Sloan is the Joker! I mean, look at him. He even has the Cesar Romero mustache!

Meanwhile, I appreciate that the Bow-Bros' Breakfront appears to contain a bajillion rifles, a stone idol almost certainly smuggled into the United States illegally, a cactus, some grenades, and now a cheap rubber mask. Oh, and I didn't see what I'm guessing is a Dr. Manhattan action figure. No wonder Roy is grimacing.

I wonder why Peter Lorre is hiding in their trophy cabinet.

Doesn't this issue establish that at least part Star City is canonically built over an oil deposit? You'd think that would have some serious effects on land values and all.