The gayest thing about Wonder Woman

The gayest thing about Wonder Woman is that she's not a lesbian.

Despite the fact that Golden Age Wonder Woman is so chockful of lesbian overtones and homoerotic fetish play,

Wonder Woman was always portrayed as having a male love interest,

But all that DISC theory fetish play that her strange creator, William Marston, put her through...

shaped HOW she approached the subject of love (as 'sex' was coded) but not with WHOM.

It was never Real Lesbianism.

Rather, it was always Show Lesbianism (tm) (two women getting freaky for the prurient interest of the putatively mostly male comic book reading audience).  And, make no mistake, Marston unequivocally wrote WW to appeal to the pervy-ness of growing boys (himself above all).

But for 'romance', Wonder Woman's focus was man-ward.

The same could not be said of Wonder Woman's tribe, the Amazons of Paradise Island, who, well... you know.

They had their playtime with one another. Centuries of it. With no apparent sense that anything was lacking; men weren't even allowed to set foot on Paradise Island.

Eventually, in the modern era, writers acknowledged that, yes, the Amazons form couples among themselves. 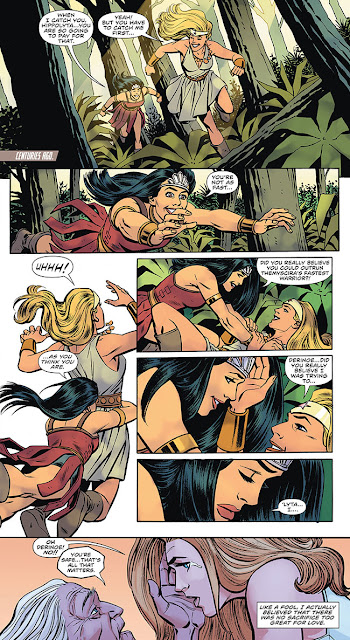 But long before that it was always pretty clear that "sisters are doing it for themselves", as the old song goes.

It's when you combine Wonder Woman with the Amazons that it gets really interesting.  The juxtaposition of those two facts -- that the Amazons are lesbians (even if only situational ones) and that Wonder Woman is not -- implies something very special.  It means that:


Diana, the only child ever raised on Paradise Island, was a sexual minority in her native society.

Thus, the gayest thing about Wonder Woman -- the thing that makes her a perfect icon that gays can identify with -- is that she isn't gay.

I don't have much I can usefully contribute to a discussion on sexual minorities (beyond "everybody should be supportive of them," obviously), but it's also been interesting to me that the Amazons have tended to be extremely liberal. Wonder Woman never gets so much as a "so, when are you going to get a girlfriend?" or "why are you not participating in our bizarrely-extensive fake-torture and -cannibalism ritual?" from her friends or mother. Eventually, we'd see an occasional non-white Amazon that nobody would comment on. Even with men, the Amazons were very careful to only follow the letter of the law, so that Steve Trevor could be carried around or Superman could hover, because they weren't literally "setting foot" on the island.

It's been pointed out (by Marston? I forget) that the original Wonder Woman stories weren't exclusively prurient, but prurient to hopefully convince a generation of kids that obsessively kinky, polyamorous bisexuals were just like the rest of us. Part of that is obviously the sexist idea that women are purer and nicer than men, but it's also interesting that the unconditional acceptance was more or less universal.

AND SHE LIKES MARCHING!!!