Naturally, the story ends with the real Leaguers beating the crap out of the fake Leaguers (the disguised Livergoons). Be grateful I'm skipping the two-page spread that's wasted on that particular fight.

Maybe the Livergoons impersonating the Leaguers isn't so ridiculous,
given that they all speak in the same annoyingly repetitive way.


And Superman returns from space to track down the no-so-dead-after-all Tattoed Man.  Turns out the Headmaster just put him into suspended animation and hoped the M.E. didn't have time to gut him that day.

If you won't kill because it's 'nasty',
then supervillain may not be the best profession for you, H.M.


This gives writer O'Neil another opportunity to try to use the familiar conventions of the Silver Age while simultaneously deriding them as stupid. 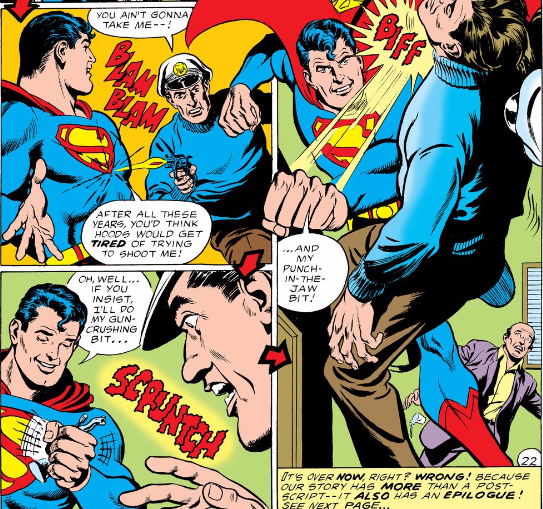 Um...you pretty much NEVER punch regular humans in the jaw, Superman.
And with good reason.  It would be nasty.


And, while capturing Headmaster, Green Arrow says something stupid. I mean, stupid even for Green Arrow. 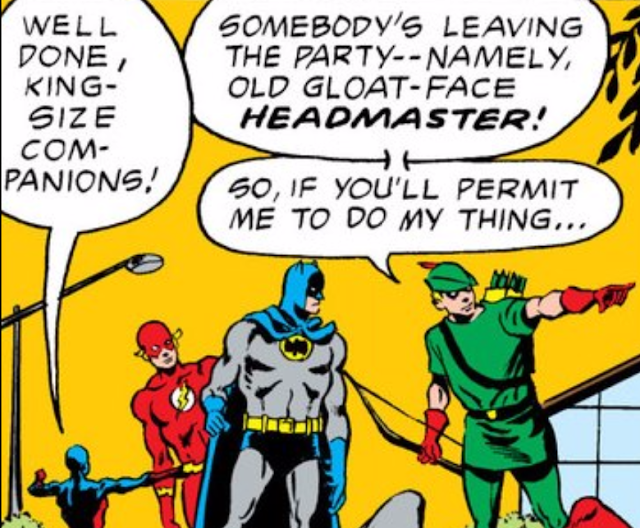 So, the Headmaster and the Livergoons are defeated and captured, Superman's back from his space-cation, and Ollie is cleared of (these) murder charges. There's nothing... 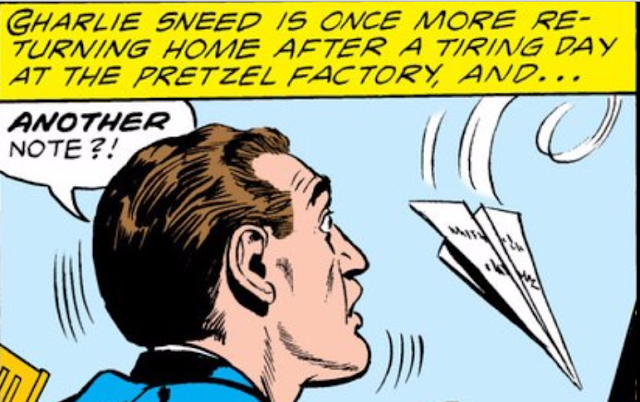 Editor's Note: Charlie Sneed working in a pretzel factory is supposed to be funny.


What about the opening scene, the gripping one with the paper airplane, thrown out a barred window by someone claiming Green Arrow was going to kill them?!?!?!  What does that have to do with the plot? 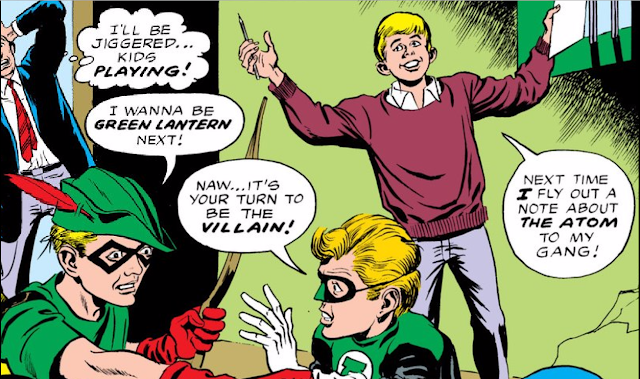 "PLEASE let me be something other than Green Arrow! ANYTHING!"


It was just a bunch of kids, playing in an abandoned barred-window room at the top of a skyscraper (as kids do), which apparently the police never investigated after Charlie took them the first note.


With stories like this immediately preceding it, no WONDER people manage to have fond memories of the Satellite Era that followed.

What a crappy adventure. I bet they never even bothered to retrieve the bomb to keep as a souvenir.

You're gonna need more lantern rings and to do that "totally off my rocker with POWER!" stare. Emphasis on the eyes, they're a important detail.

THERE IS NO BOMB THE BOMB IS A LIE

Imagine this as your first exposure to DC comics ever. You would swear that Superman, Batman, Flash, Green Arrow, Wonder Woman, and Atom were D-list superheroes.

While Ray waits for someone--anyone--to laugh at his joke and Barry tries desperately to be noticed, is Bruce about to clock Ollie? Because it really looks like that's what's about to happen, and I'd much rather read that comic than the one where Superman shatters the jaw of some dope in a turtleneck and sailor cap.

Also, "Next time I fly out a note about the Atom to my gang!" Huh!? On the other hand, he's awfully well-dressed for a kid out playing in abandoned crime scenes, so maybe he's middle management at the pretzel factory and Charlie is said gang.

Wait, though. What if Cabeza Maestro was bluffing his goons and lying about the bomb was the real lie? I mean, it was probably one of those crappy towns that nobody cares about, but still...

John - holy hell, I didn't even notice Batman's body language, but man you called it. He is royally pissed off to be dealing with this nonsense.

Charlie Sneed's body language in that final panel was pretty impressive too. When an adult does that, it almost always indicates head trauma of some thing. Which reinforces the possibility that Charlie Sneed is actually Hal Jordan.