When we last left the JLA, the Flash was brrzzapped unconscious, Superman was banished off-planet by a court order, Green Arrow was captured by a quartet of british-biker-garbed Livergoons (who, despite their outfits, talk like the Bowery Boys, non-stop), and Batman (who beats the crap out of the Livergoons who capture GA, because he's Batman) has been ray-gunned into submission.

He's lying, by the way;
because he's not only a villain he's a cheapskate, and lying is cheaper than bombs.


That (now revealed) villain, in case you don't recognize him from behind is none other than :

We agree with you completely, Flash.


The Headmaster.  Another powerless, ugly, and idiotic JLA villain brought to you by Gardner Fox and Mike Sekowsky.  Actually his full name was "Headmaster Mind" in his original appearance four years before this, but by this point he seems to have lost his "Mind".  So to speak.

"Vanquisment" really is a word; I had to look it up to make sure.


His plan is to frame the captured heroes for crimes committed by costumed Livergoons and then dump the real heroes corpses nearby afterwards claiming to have killed them, which will then make him popular enough to be elected dictator. 
This plan took him four years of careful planning.  This is why you probably haven't heard of the Headmaster.  He's the in-universe equivalent of Zack Snyder, since his plans depend on making the world hate and mistrust DC's greatest heroes.

That's a better grade than the writer gets, GA!

Add 'crumbiness' to the list of 1001 Ways to Defeat Green Arrow. One nice touch to this plan, though. It does give the villain a reason not to kill the heroes right away; he needs their corpses to be fresh for later, or the frame up won't work. I mean, at least, that's what I am deducing; he doesn't say that or anything because that would make too much sense.

Anyway, obviously the Headmaster's plan is *ahem* foolproof.  So what can possibly save them...!?!?!

Don't worry, because the one thing that can save them is currently flying to their rescue: 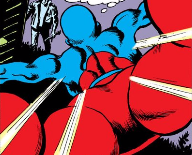 I can never unsee that image of The Atom.

Also, Atom's Undercarriage is the name of our next quartet.

No, but it's now my new signature epithet for times of exasperation.

"Hey look! We're being robbed by a Green Arrow with no archery skills, a The Flash moving no faster than a normal person, and a Batman with no command of martial arts. Clearly the Justice League has turned evil!"

Also back in late October: "Oh no! Superman, Wonder Woman, and Batman are all at my door, asking for candy. Clearly the Justice League have been turned into starving children!"

Wait, if the JLA got rekt by a guy called The Headmaster, would that mean that the JLA just got...

The lord knows I have a certain... fetish if you will... but not even I want to be that close to the Atom's derriere.

Oh,shoot. And, here, I thought that this could be the title for Sally's second blog.

So three members of the Justice League are being held by a trap that will electrocute them if they move. But unbeknownst to everyone, there is a new player on the scene: a nuclear physicist who can travel completely unseen, enter electronic devices, and destroy them from the inside with his mastery of all things electronic.

I bet the first thing he does is punch the bad guy.

Much better than THAT, actually!

BTW, the device will not harm the Leaguers at all. They've been told that moving from where they are will detonate a large bomb in a nearby village, killing people.

"They've been told that moving from where they are will detonate a large bomb in a nearby village, killing people."

That's actually the cleverest part of the Headmaster's plan. Even super-escape-artist Batman would be reluctant to risk the lives of innocents. Barry would hesitate to vibrate out, and Ollie ... well, no need to worry about Ollie, is there, Headmaster?

Good point, I forgot about the bomb -- and yes, it is pretty clever.

Let's see, if I were an Atom writer from the Silver Age, I would note that the Atom can ride electrons on phone calls (for example), so he should be able to ride the signal to the bomb, deactivate the bomb, and ride the signal back. I mean, if I were writing the Atom as consistent with his powers and expertise from the era.

... nope, my money is still on the Atom just punching the bad guy. And if at all possible, doing so while at full size so as to not take any advantage of his powers.

THERE IS NO BOMB.

Well, yes, but that actually makes the Headmaster look even smarter. Our heroes have to assume there is one (unless we're in a Zack Snyder movie, where bodies accumulate like fallen leaves on the streets of major cities). Headmaster gets the same effect without going to the expense, difficulty, and danger of getting and planting a bomb. Plus, he gets nyah-nyah points for making the League look like idiots.

Really, we're getting into Luthor-level duplicity here. And all from a guy wearing a mortarboard. I'm becoming a fan.

The more I think about this, the more I believe the Headmaster is a diabolical genius. He's turned the World's Greatest Heroes into his bitches, while wearing an old choir robe and supported only by a gaggle of inept Ringos.

"Hey, Batman, drive me to the airport or I'll detonate this bomb I've hidden in the old folks' home."

"Flash, pick up my dry cleaning. My finger's ON THE BUTTON, dammit!"

"Arrow, mow my lawn. And do it right this time, keep your stupid propeller arrow in your quiver."

That settles it. My Halloween costume this year is going to be Headmaster. Plus, the dude's facial hair is ON POINT.

Scipio, will you back me up dressed as a Livergoon?

So the Headmaster's plan is to kill the Justice League by theoretically threatening the lives of some random people, exploiting their bizarre willingness to die if even a single civilian death is prevented as a result, then frame them for various crimes and offer up their corpses as a means of convincing the public to accept and embrace his wardship? That might be a decent plot, it's hard to tell with a villain this objectively terrible.
I also don't see how this plan deals with Superman in the long term. I guess it would be funny to make him watch helplessly from space as his super friends are killed by a man with a severely punchable face, but after that the jig's pretty much up, isn't it?

"
Scipio, will you back me up dressed as a Livergoon? "

Well, I can certainly talk non-stop when people would rather I shut up.

"I also don't see how this plan deals with Superman in the long term. I guess it would be funny to make him watch helplessly from space as his super friends are killed by a man with a severely punchable face, but after that the jig's pretty much up, isn't it?"

Its silver-bronze ageish I think, ins't that the time there was so much kryptonite in Earth-1 that it was calculated Krypton was a Jupiter-mass planet and everybody and his mother had kryptonite rings and necklaces and keepsakes given to them by their grandmothers, and even common thieves had some of the stuff stashed near their weed?

The thought bubble, as I recall, does not say "I have a package for you." Surely, an oversight on Denny's part.

Wait, wait, wait. Incessantly-rambling moron in a Bat-suit. Is this where all that first-person narration caption crap came from? Is this the first appearance of the pearl-obsessed, Post-Crisis Batman!?

Bryan, I think you're right. For all the inept scripting, the goofy story premise, and the lame theme, this is a shockingly sensible plan. It would take a post-1990 superhero to even consider breaking free, and the heroes who could foil the plan without doing so have been dispensed with elsewhere.

You killed with the Damian line. My congratulations. I think I broke a rib.

Actually, Tad, a nod to my friend Damian Maffei, who is great fan of the Atom (and presumably his undercarriage).l