While we're waiting for the cinematic dawn of justice to bring some sunlight to the gloomy films of the Snyderverse, let's recall just how stupid the Justice League can be with a look at JLA Vol 1 #69. 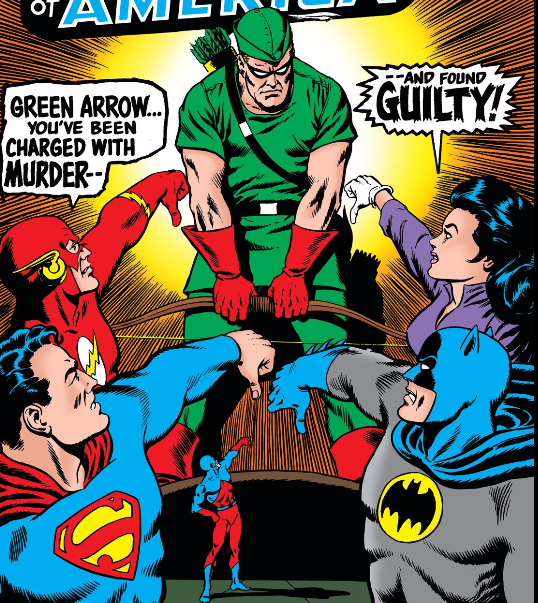 "You have failed this city!" 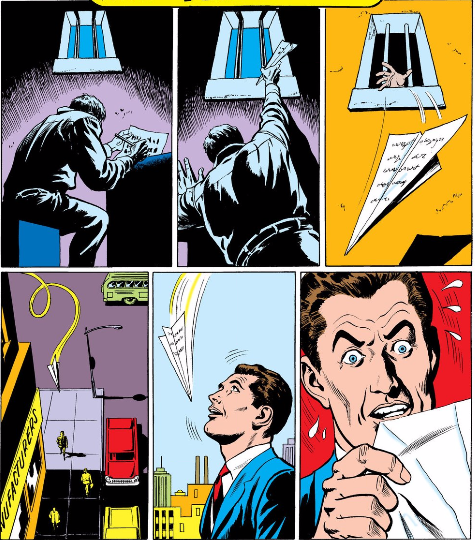 I was kind of hoping that paper airplane was headed right down his throat,
choking him to death in broad daylight as the beginning of a grim and gritty comeback for Kite-Man.  Ah, well.


Here, in a Silver Age early example of decompressed storytelling, DC takes an entire silent page to have someone throw a paper airplane out a window.  Stupid? Wasteful? Maybe.  But you will never forget this page now. 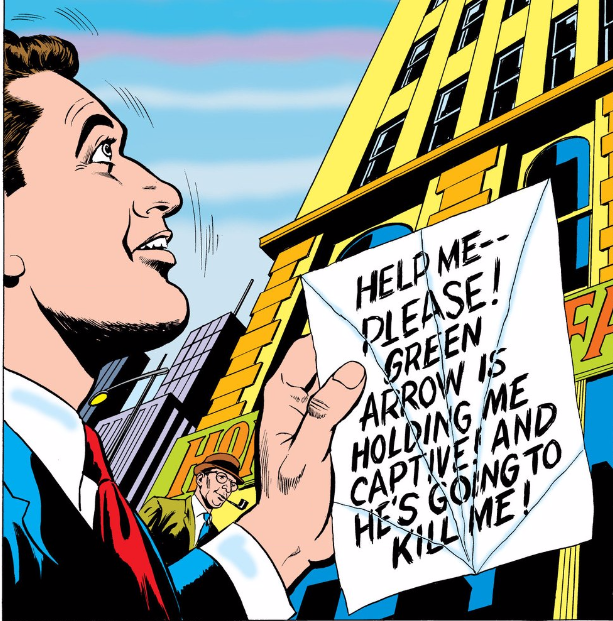 Add "paper airplane" to the list of 1000 Ways to Defeat Green Arrow, please.


But DC loved these "Silver Age Set-Ups": odd, unlikely, covers or openings that left you achingly curious and unable not to buy/continue reading.  "Why is Batman holding up a gorilla?"  Well, child, you'll have to buy the comic to find out, or wait until the internet is invented. 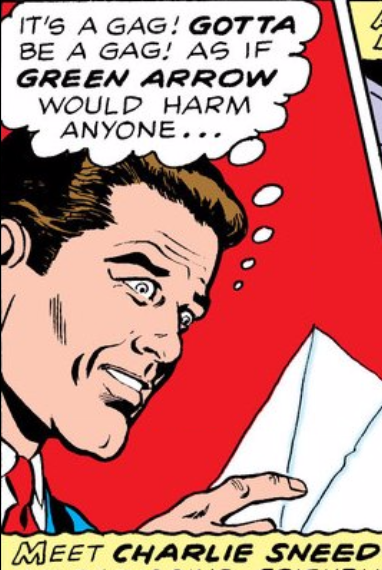 "Would"? \Hey, letterer, I think you misspelled "could".


Ah, the subtlety of the Silver Age; Average Schmoes were always given demeaning names like "Charlie Sneed".  I guess in a world where your god-like heroes are named Bruce, Clark, Oliver, and Bartholomew you have to go extra far to designate someone as a regular joe.

Meanwhile, a corpse is found elsewhere in this unnamed city by members of the Dr. Occult Fan Club.... 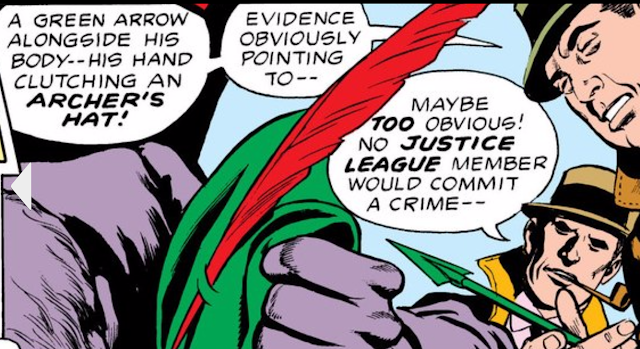 
When this news goes public, Charlie Sneed, unencumbered by gum, snaps into action!


Diana Prince, out of costume, reports this turn of events to the JLA, who respond with characteristic serialocution:

Bruce and Barry were always the smart ones.  But Clark is very pretty.


I love the fact that this panel implies that Diana waltzed into JLA HQ and tells some winding tale about the people's case against Green Arrow BEFORE anyone hits her with a batarang/heat vision/ boxing glove arrow/teeny tiny fist or asks how she got in.  By the way, this is the beginning of Wonder Woman's "powerless period"--the mod boutique, the white pantsuit, the hate-hate relationship with I Ching.

After delivering her astonishing news ("Green Arrow is wanted!  Whooda thunk it!?"), she takes a sabbatical from the League, to which Barry, a true comic book fanboy, reacts thus:

"As Aquaman has lost his wife Mera,
and Green Lantern has lost Carol Ferris,
so are the Days of Our Lives."

At that point, there is ZERO narrative basis for Barry's assumption that Superman might marry Wonder Woman; he's just shipping.  Barry's a longtime fanboy who's concerned about changing continuity and how it means he getting old and will be dead in the not too distant for future.  Well, dead for 23 years, anyway.

This being comics, the cops are slower than even a de-powered Diana, and finally issue an APB on GA after she leaves by means of a staccato rasp:

"Green Arrow? Kill someone?! Nonsense; this is DC, not the CW."

Dark Musings.  Staccato Rasp.  If you need to name your metal band, look no further than Silver Age narration boxes.  The League, who finally have an excuse to get rid of Green Arrow, make him leave quickly before they receive orders to arrest him, because they are loophole-loving vigilantes rather than actual cops.  Except for Barry, who's just lazy. 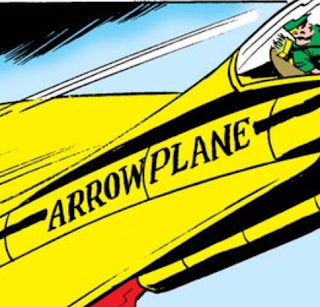 Never change, Ollie; never change.
Posted by Scipio at 9:59 AM

I think Charlie would be more accurate stating, "As if Green Arrow COULD harm anyone…”.


Also, Barry wasn't shipping. He just ran into the future and picked up a copy of the New52 Wonder-Supes title.

I just guess that Hal got tired of Ollie calling him a nazi all the time because he voted for Goldwater, and just flat out Framed him!

Of course, being Hal, he did a crappy job.

Hal is suspiciously ABSENT from this story, ISN'T HE?

I thought the guy on the street (later revealed to be Charlie Sneed) was Hal Jordan, it sure looks like him. But the paper plane didn't hit him in the head so I guess it couldn't have been.

Love your reviews of old comics; please be bored enough to do more of them.

I do like the fact that they recognize immediately that it's one of those "superhero framed for a crime" things and act accordingly.

If this were a modern comic they'd be asking the framed hero grimly if he did it, and angsting in shadowy panels about their duty to turn him over to the law. At least one of them probably would decide it was his duty and try to capture him without bothering to consult the others, and there'd be a five-page fight scene.

In some ways, heroes have gotten less smart since then.

I love the fact that Ollie has to label his plane. Doubtlessly so he can find it in the Justice League hangar, amidst all the Invisible Jets and Batplanes.

If it takes the JLA that long to figure out that Wonder Woman is standing directly in front of them totally undisguised, that's not much of a credit to their detective skills.

Well, Batman and Flash know, because they ARE detectives. The rest? No excuse really.

Also why is Oliver's plane yellow rather than, you know, green? Misdirection? In case Hal gets pissed at being called a Nazi?

Good thing the League is too powerful for this to work: https://www.youtube.com/watch?v=MWKAlMNRCTk

NO ONE CAN KNOW MY SECRET!!

Talking about it... btw, the Grave Episode is today. Oh brother. Let's hope Scipio can harvest the butthurt storm coming. ITs gonna be epic!

Ollie's plane is yellow so that Hal won't sneak off and crash it! It took five Arrow planes before Ollie finally got fed up!

With only slightly different wording and Wonder Woman back in costume, that would have been a great alternate cover for JLA#4...

And yeah, there's definitely a glitch in the Secret Sanctuary security system. And occupants. "Yes, thanks, that's very important exposition you've delivered, but who are you and how did you find our secret headquarters?"

Also, I think it's worth pointing out that, near the end of the Satellite days, the Flash also decided he needed to be dating Zatanna. So, this isn't a one-off obsession for him.